May 2007, Amsterdam, the Netherlands – SECOND PRIZE 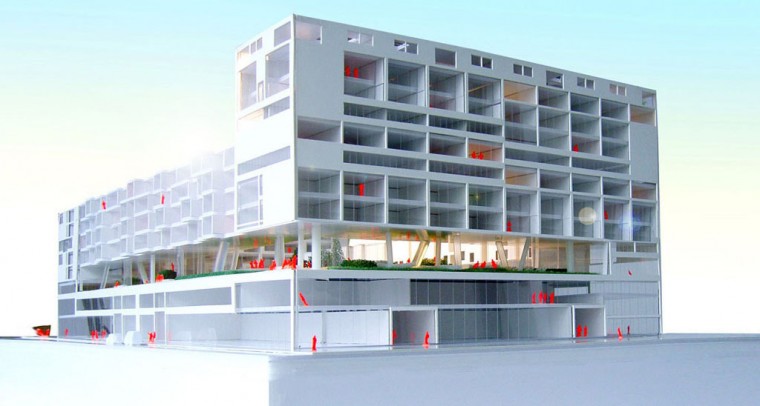 In order to satisfy residential and business requirements in Amsterdam – as an alternative to expansion areas such as IJburg – former industrial sites on the north bank of the river IJ will be restructured to intensify the use of the land available.
These areas enjoy a central location, due to their proximity to the city centre and the visual connection with the centre from the northern side of Central Station. The location of our project belongs to the Buiksloterham, an industrial estate which, over the next 25 years, will gradually be transformed into a mixed residential-business area. It is required that each apartment contains a more or less independent working area, allowing for the possibility of working at, or next to one’s, home.

In contrast to other recently developed areas such as Borneo, the Buiksloterham will remain rougher and more loyal to its industrial past. The large scale represented by the old factories and industries and the need for references north of the IJ to enter into dialogue with landmarks such as Silodam to the south, convinced us to cluster the entire programme in one single building. Due to its 45 meters in height it will be visible from the entire surrounding area, becoming a reference point for the Garden Villages to the left of the Flora Park, marking the end of the dock, and creating a façade for the new park located next to the water. In front of Silodam by MVRDV or the future Pontsteiger by Arons en Gelauff, Big B completes the singular character of this part of the Ij on the north bank.

Big B is placed in the intersection of the Johan van Hasseltkanaal and the IJkanaal I, surrounded by water on three sides. Rather than developing pieces of architecture in a master plan, the project was generated as a master plan itself, placed on top of an architectural piece. It was composed as a 10m-high unifying plinth in the top of which we placed the residential master plan and a new privileged public space entirely open to the IJ River and the Zijkanaal, allowing each of the 161 apartments to enjoy a direct view of the water.The Masterplan character of Big B simplifies the division in phases and management, and makes the project attractive before its completion. The urban plinth will unify the 10 metre elevated residential master plan.
The diversity of the composition in the facades shows the individual character of each apartment; Big B combines a clever and simple urban strategy with a bespoke architecture.

Generation:
1-The large scale is a common denominator deriving from the industrial character of the area. We host the entire programme in one block. We need a big mass to fill the large site (125 m x 75 m) so we create a 10 metre high plinth that will host in its core the totality of the parking space over three levels above ground, eliminating completely the need for excavation of the site, and thus saving a considerable amount of money. This core will be surrounded by a ring of galleries, offices, ateliers, and commercial spaces. On top of the plinth we plan the elevated public space.

2-From now on, the assignment becomes urban planning. Given the required number houses and the regulations concerning maximum height, we need three residential blocks. Placing the blocks according to their best views onto the water would deprive the public space from its view. Moreover, only one side from each block would enjoy a direct view.

3-By slicing off from the blocks the floors that block the view and relocating these into the plinth, we fulfill the initial challenge of giving each of the 161 apartments a direct view onto the water; and the public space will be entirely open to the IJ River and the Zijkanaal. The common space becomes a platform for activities with a privileged view onto the IJ River and the Zijkanaal

Surroundings:
We plan an urban garden on the side of Big B which will maintain the existing traces of paths as well as the industrial character of the site. All activities there may be combined and continued on the elevated garden of Big B: open gallery markets, art workshops… We incorporate the small island into the master plan on which we only plan a small hotel and a restaurant, which will mark the end of the promenade along the Johan van Hasseltkanaal, making it the “Hotel New York” – analogous to the famous Rotterdam hotel – of the district. This hotel will start operating at an earlier stage giving the area some character right from the start. The remainder of the housing block of the master plan will be designed in such a way as to offer the apartments a direct view onto the water.
This strategic location, perfectly accessible by metro, boat, and car, can be developed into a crowded and busy location at day and night, becoming a reference point for the northern side of Amsterdam. 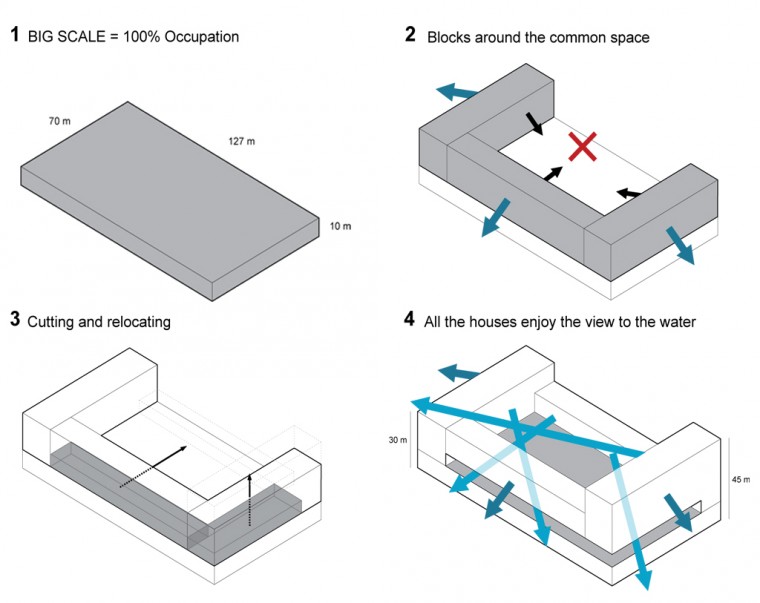 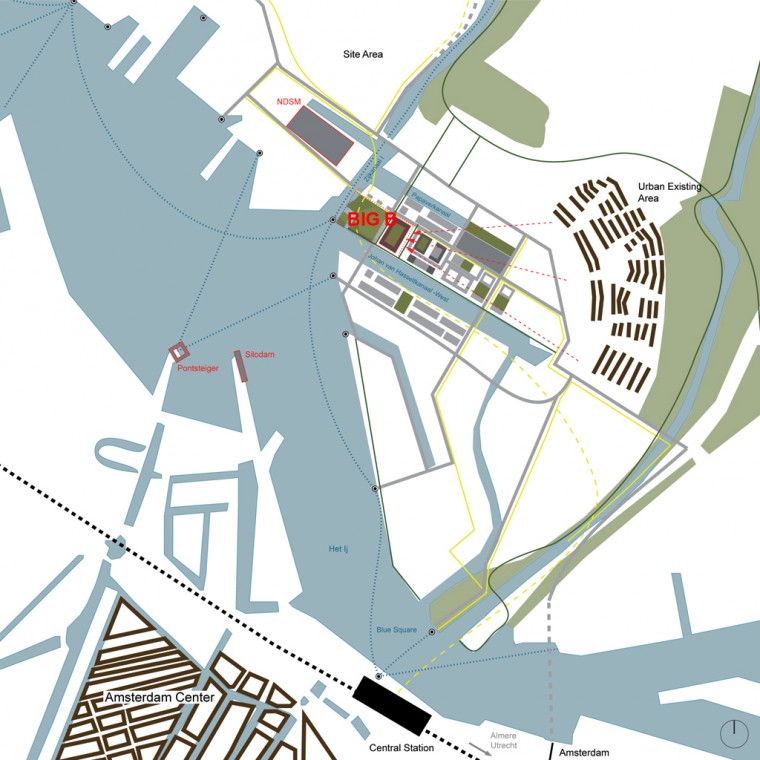 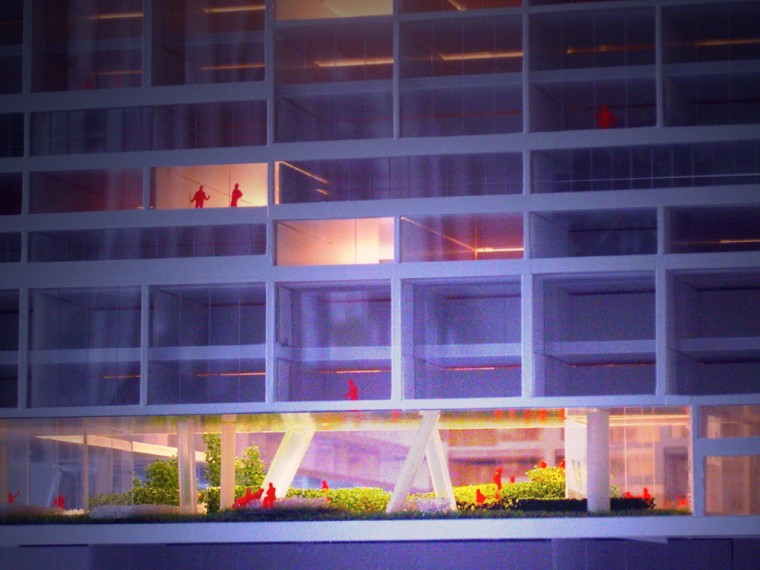 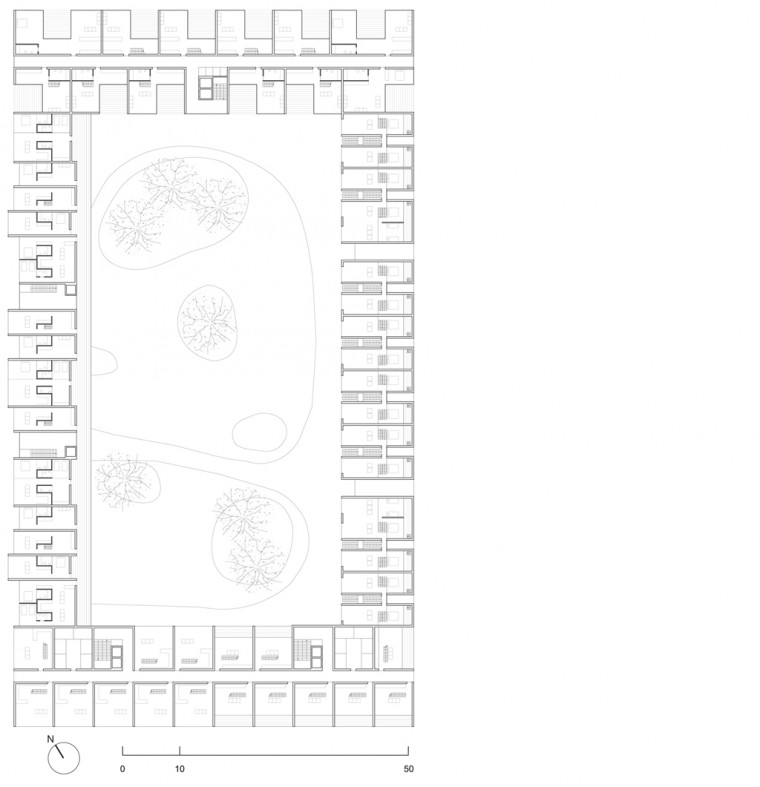 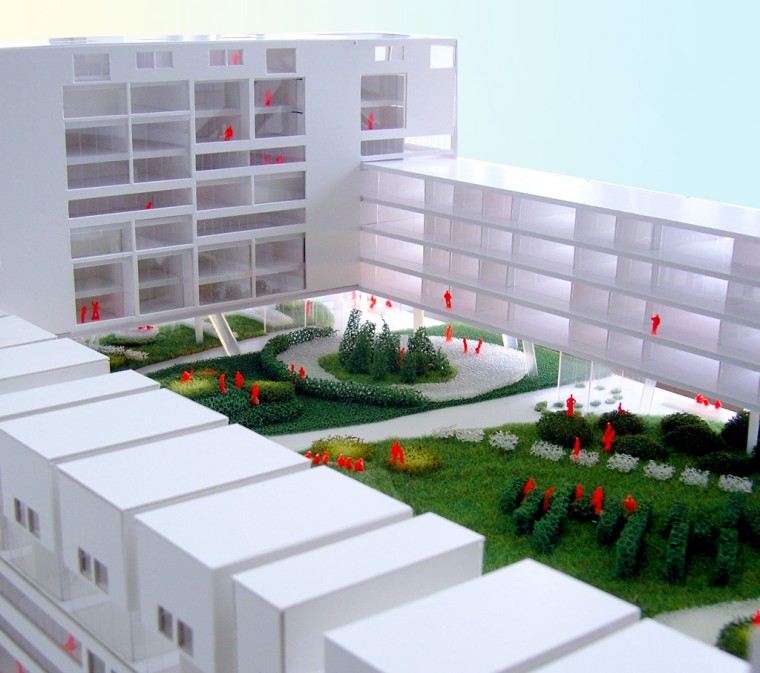 The four blocks host 16 different typologies of housing + working, always maintaining a direct view onto the water. The size of the houses varies from 40 m2 to 275 m2 (for the houses containing atelier and gallery) with a majority of the apartments coming in at around 120 m2. A third of the apartments will be rental properties. The diversity in size and typology accommodates the needs of the many different income groups in society. 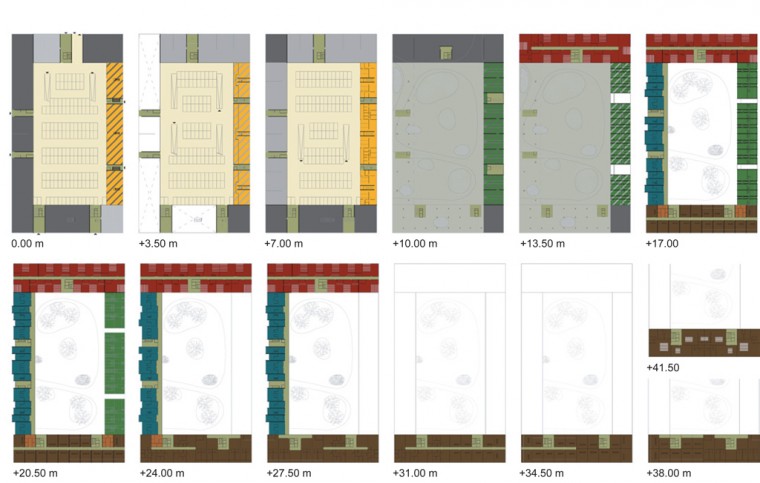 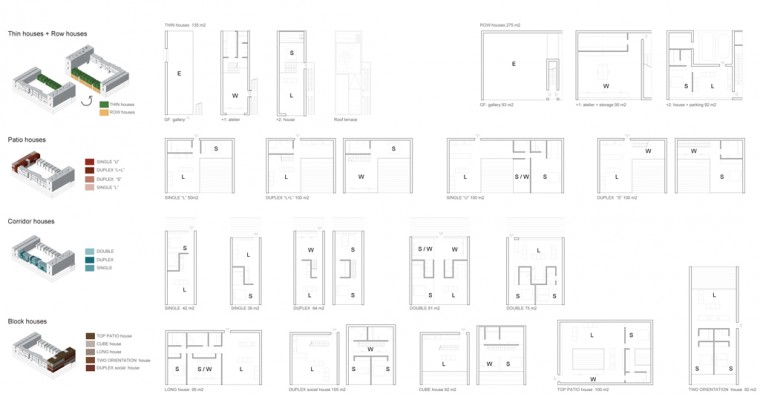 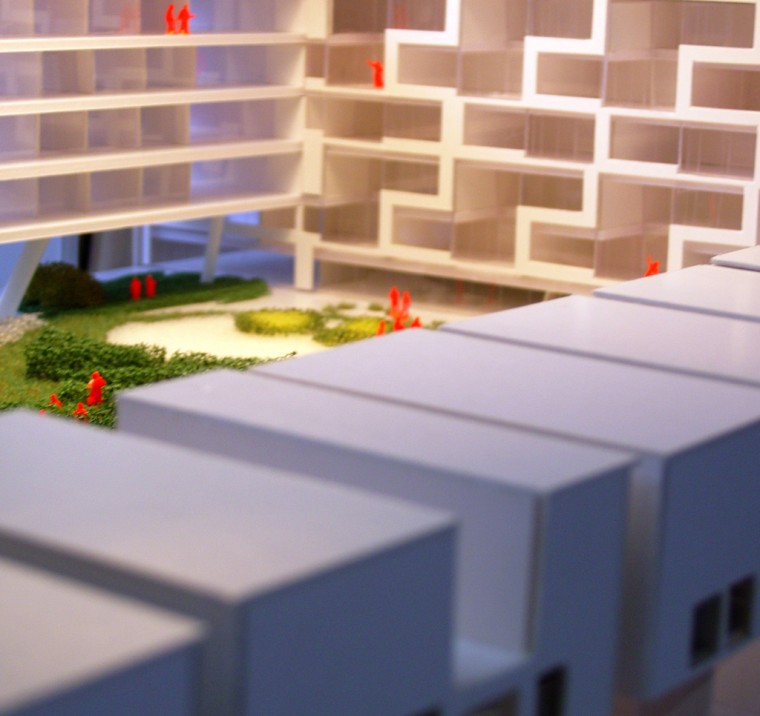