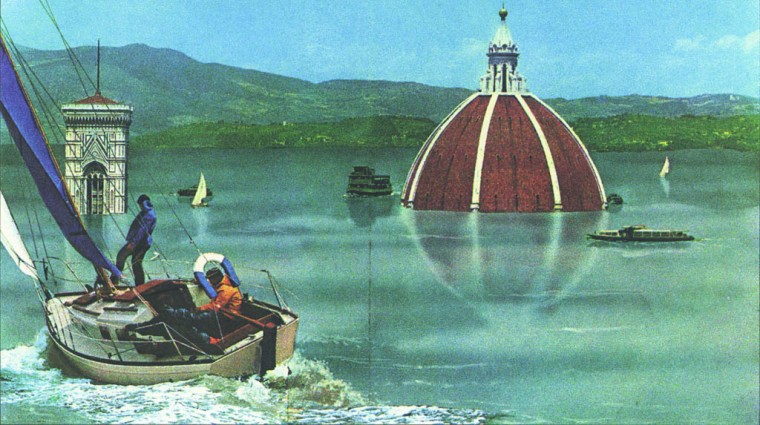 Beatriz Ramo and Bernd Upmeyer spoke on behalf of MONU with Adolfo Natalini.
Adolfo Natalini was one of the founders of the legendary 60ies architecture firm Superstudio, which was one of major part of the Radical architecture movement of the late 1960s. In 1991 Natalini founded the Florence based office Natalini Architetti.

The interview took part in his office in Florence.

↑image above: Flooded Florence, by Superstudio 1972 © All images courtesy of Natalini Architetti. 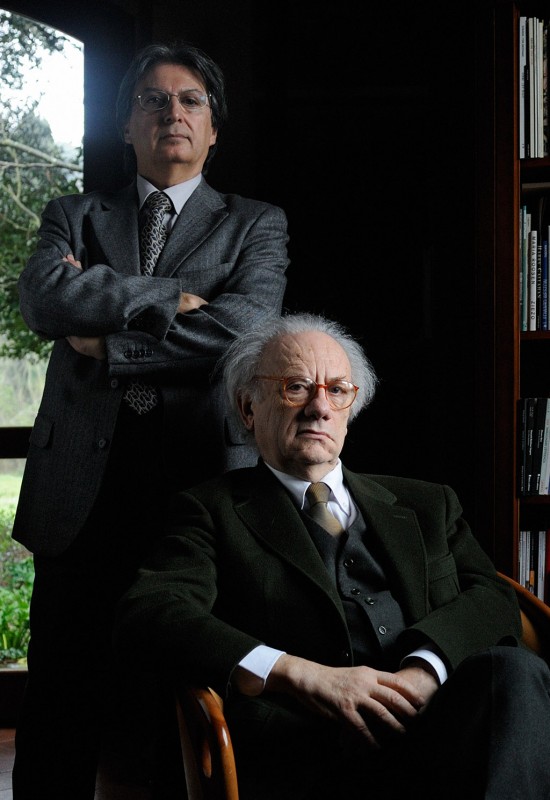 Beatriz Ramo: When we opened your website, the first thing we saw was this picture and we thought ‘he looks very serious’.
Adolfo Natalini: I am very serious. I am deadly serious.

BR: We were reminded of historical paintings, where everything in the composition had a meaning. They were very narrative. We X-Rayed every element in your photograph; they seem to reveal tradition, culture, decorum…. Does it show the values you are striving for as an architect?
AN: This is a funny photograph. Somebody asked us to be in a very professional portrait, something to be used for an advertising campaign by the brick producers of Italy. And they wanted us to look like serious professionals, so they did it this way. Which by the way I like, because you can see several objects that I produced myself, like the chair, the bookshelf…I think that this photograph does represent the office quite well. In fact we are quite old-fashioned guys; we are not modern at all. I have always dressed in the same way; we always wear ties, because we were brought up in families in which we were supposed to be properly dressed. I am a man of habit; I have always the same things… And in this photograph is one of my best friends. Fabrizio Natalini and I have been working together from the beginning of ’71. So it’s a sort of family photograph.

BR: If Fabrizio has shared all the experiences with you, from Superstudio to Natalini Architetti, he probably did not see this radical change in your work, which most people insist on pointing out. We think that rather than changing you just moved from writing to building, but your position has stayed the same.
AN: To me it was not a radical change. People look at both images at the same time, but there are 40 years between the two of them. If they look at my work in chronological sequence, they will not see a radical change. In fact, the most conceptual work was not produced during the Superstudio years, but towards’79 and so on, when I designed the Romerberg in Frankfurt or the Jerusalem project, which are much more theoretical than everything else that we did before.
The difference is that with the more recent projects we were using the tools of architecture and in the previous ones we were using the tools of art, literature, and so on.
The changes occurred because I tried to build some of my ideas, and when you enter the world of construction ideas are not enough and you have to use other material things and tools that are more involved in the philosophy of construction than in theories, philosophies, politics, and so on. (…)

BR: The context has changed in these 40 years, and this made you look radical at one point and conservative at the other. In both cases we can see that your work is a reaction to something.
AN: What I’m doing now is a reaction against the present scene, which is cynical modernism, and is much more radical than our opposition as Superstudio against the international movement. Because at that moment our reaction was only verbal, literal, and now I am trying to compete with built works, with other built things, so it’s even more difficult. (…)

Bernd Upmeyer: Yesterday you mentioned that you would not have liked to see the Continuous Monument built.
AN: Yes. It was not meant to be built. It was an “Anti-utopia”. During those years there were two common ideas. One was that technology was going to solve everything. The other was that the monument was the most powerful way of expressing yourself and society, because of its symbolic value. We didn’t agree with either idea. So in order to demonstrate that both ideas were false, we put them together and pushed them to reveal their extreme consequences. We said we can make a monument using super-technology that is as long as a highway and the result is a monster. So the continuous monument was meant to warn society against the consequences of these ideas. (…)

BR: In your opinion, is there something that we could learn from the modern movement too? Something that has been proven to be valid?
AN: Yes, we learned something from the modern movement; basically the elevator and the toilet. They are the only two valid things that were invented in the past century. And the toilet is a real invention. The elevator is perhaps completely wrong, because it made the skyscraper possible and that is a disaster! You cannot live so high because you are totally dependent on machines. It’s not living anymore; it’s like when you are in the hospital and you have an oxygen mask on, external blood circulation, and so on…(…)

BR: So would you suggest that we preserve not only historic cities, but also some Plattenbauten or some of the megastructures we saw today, because they are all a part of the history of architecture?
AN: Oh yes, yes. They are a not only a very important document, they tried to be a solution to a problem. Probably now we are not able to find a better solution. For example, going back to Sorgane, if we demolish one of the neobrutalist structures by Ricci and Savioli what will replace it will be even worse. You’ve seen the new one, it’s horrible. Much worse than what was there before. (…)

BR: So do you think that whatever comes later is not as good as what was done in the past?
AN: Not always. Sometimes new things are better. For example if you design a chair, and afterwards you design another chair that is lighter, less expensive, and more ergonomic, the newer one is better. Sometimes it’s impossible to produce something which is better, for example the bicycle and the umbrella are perfect objects. With some things there is no need to try to go further, because it is already done well. (…)

BR: But this could lead to a contradiction because it undermines the potential of new “human genius”, which is what UNESCO aims to preserve.
AN: (…) But this disbelief in modern architecture coming from UNESCO, etcetera, is based on what modern architecture has been doing for the past century; it is a series of disasters! I can’t explain it as well as Leon Krier; Leon is an incredible polemist and he can explain it very well. When they look at the majority of so-called modern architecture they think ‘if this is what you are able to do, generally speaking, it’s better not to do anything’. (…)

BR: And how would you judge Rem Koolhaas’ list of criteria for demolition, as an answer to UNESCO’s list of criteria for preservation?
AN: The ability to destroy gives you an incredible amount of responsibility, you must be sure that what you’re doing is much more appropriate than what was demolished. And I don’t think Rem is the right person to judge on these matters, because his mind is so focused on the future that he isn’t able to understand anything about the past. The critical method of Rem is based on Salvador Dali’s so called Paranoic-critical method; it’s something that is purely surrealist. When I met him, he was very fond of the future, he was very fond of Dali, and he was very fond of pornography.

BR: And he was also very fond of Superstudio…(…)

BR: Would you preserve CCTV in Beijing, for example?
AN: No, it’s terrible, terrible. It’s like a crooked skyscraper. When the skyscraper was invented, the only good critique was by Le Corbusier: ‘they are too small’. In fact the OMA’s Renaissance building for Dubai is exactly the UN building of Le Corbusier. The idea of the skyscraper is something that goes up, but the CCTV goes up, and then it changes its mind, and then it goes down! And it’s like ‘it’s collapsing!’ Of course everyone is very fond of the tower of Pisa, for a very simple reason: they thought it is going to collapse! Everyone with a camera hopes to be there exactly when it falls down. It’s the same when they go to Venice; they say ‘it’s going to be submerged!’ There is this insane passion for disaster, and this is what people expected of that building [the CCTV]. In fact the building was on fire and somehow everyone enjoyed it. (…)

BR: What about this image that you did of Florence, where the historical centre is completely flooded?
AN: That one was part of a series of images about Florence and Venice etc… They were jokes about restoration, ICOMOS, etc. We said that, if you really want to restore the situation, why just restore to the 19th Century? Why not restore the Renaissance situation? If you do that, why not the Medieval situation? In fact, why don’t you go back to the Roman situation? And if you go back that far, why don’t you go back to the Pleistocene situation? In the Pleistocene situation Florence was a lake! And we figured out what the level of the lake was. We said ‘it’s really easy, we can do it. We have to dam the Arno river in a certain place. Leonardo did a study that showed it could be done’. So we would dam the Arno river, and Florence would be a submerged city, which would be perfect for tourism. They could see the city by submarine instead of by bus!