7 Denied Countries
* The E70 refers to the highway composed of the E70-E75-E80 motorways
Driving through South-eastern Europe is an experience in itself. One can find donkeys loaded like trucks led by Romanian women; four lanes of cars where there were supposed to be two; missing indicators; signs prohibiting animals to circulate on expressways; or Bulgarian melon sellers on the verge of the road. Driving the 550 km between Sarajevo and Sofia can take up to 17 hours and – on a rainy day – one may expect to be on the road for 14 hours for the 400 km from Sofia to Bucharest. Thus, it comes as a big surprise when the 400 km from Sofia to Belgrade only takes 3.5 hours and the highway is better than most similar roads in Spain. And it really is a mystery that the road from Belgrade to Zagreb (taking less than 4 hours) is a spotless highway with perfect asphalt lanes served by first-class petrol stations and brand new equipment. This reminds one of German highways (even more so, since many of the cars driving on those roads have German number plates although the families inside do not look particularly German).
Why does Belgrade have a perfect road going to Sofia or Zagreb, and not to Bucharest? Why is Sarajevo not connected with any other city? Why do cities like Plovdiv, Edirne, or Krnjevo have an impeccable highway while capitals such as Sarajevo or Bucharest do not?
Zooming out of the roadmap to get a complete overview of South-eastern Europe, one begins to comprehend the mystery: there is an unnoticed diagonal crossing the continent. The highway E70 traverses South-eastern Europe in the shortest possible way to link up with something else: Western Europe and Turkey, or better: Germany and Istanbul. If Istanbul is the connection between Asia and Europe, the E70 is the link between Western Europe and Istanbul.

Today, there are almost 4 Million Turks living in Western Europe – 10% of the population of the Ottoman Empire at its peak, an Empire that extended over 20 million km² – almost 5 times bigger than EU is today. On the one hand, the E70 connects them with their homeland, Turkey. On the other hand, countries that were once part of the Ottoman Empire are today ignored by the E70: Bosnia and Herzegovina, Albania, Macedonia, Romania, Croatia, Bulgaria, and Serbia and Montenegro. (These last three are somehow luckier for being located on the diagonal).
The E70 uses the surface of the Balkans without any intention of connecting its separate elements.
Today, 2.5 Million Turks live in Germany – the largest ‘Diaspora’. In the 1960s they were invited as ‘Gastarbeiter’, and in the 1970s they were no longer ‘guest’ workers but long-term residents, settling down in almost every West German city, where they opened private businesses that today employ many thousands of Germans.
The E70 is the road to success for thousands of Turks who come to Western Europe in search of a bright future, or for those who victoriously return to their beloved Turkey.
The E70 is a selective two-way path of pilgrimage with a beloved beginning and a desired end, but without any stopovers in the middle. 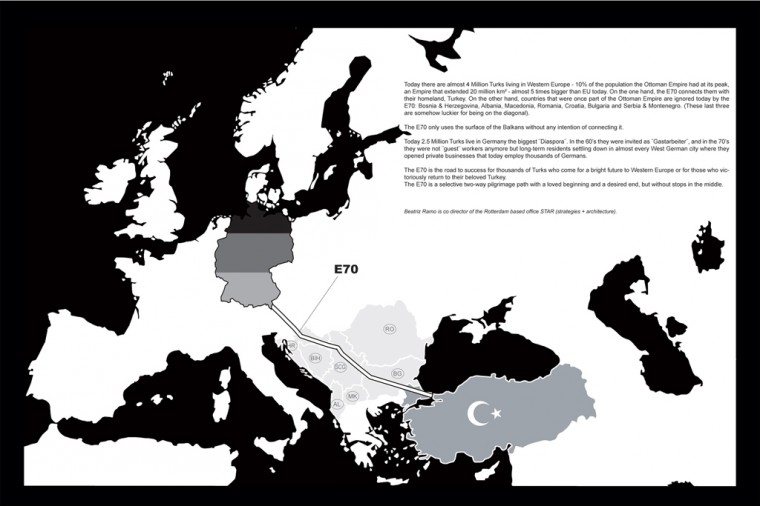