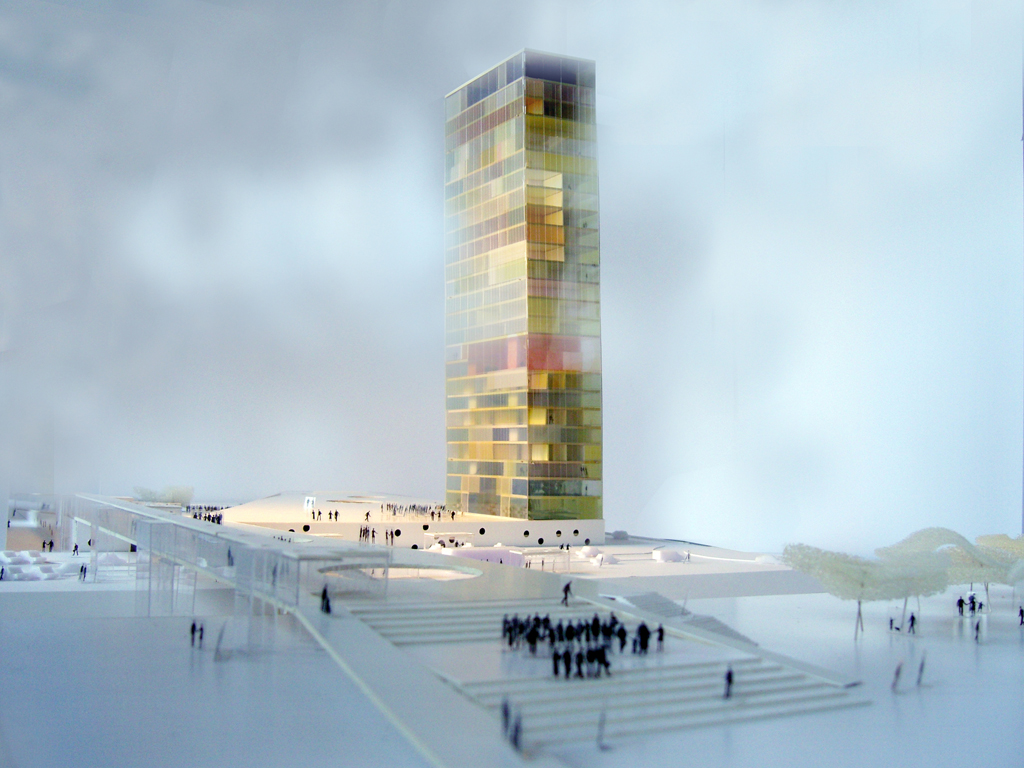 The future development of Greater Helsinki will balance the current centrifugal forces of Helsinki in the Region, by expanding the activity centres outside Ring Road III. Leinelä is adjacent to this and has the potential to be a distinctive and pleasant area for residents and workers.
The construction of the circle rail line will bring new life to the area. Leinelä aims to become an attractive place for residents and workers; a new residential and business area in the forest with direct connections to the airport and Helsinki city centre.

The concentration of the given programme in one single building, one big plaza, and one park is used to achieve a dynamic and lively atmosphere in a very low-density area. A building emerging from the trees will be the landmark of Leinelä. The tower will be visible from Helsinki-Vantaa airport, from Tuusulanväylä and Lahdenväylä motorways, from the future Koivukylänväylä road, and from the new circle rail line and the existing train routes.
The tower helps to position Leinelä and to herald its strength.
It is positioned facing the airport and the trains, in order to minimize exposure to the north.
We use less than 10% of the available area, and we maintain the remainder as forest. The Tower will attain the most visibility with the minimum ground impact. A big urban plaza, an orthogonal park, and a big platform to access the trains will complete the master plan of the area.

We maintain the proposed road network but we suggest a different placement of certain buildings, reinforcing the central position of Leinelä Tower and with a better orientation to the sun.
Taking Leinelä Tower as the centre, the density of inhabitants decreases the closer we get to the forest. The density of trees will decrease the closer we get to the Plaza.

Direct access to Leinelä Tower from the station makes it a very interesting location not only for residents but also for offices, which will occupy the lower levels, while housing will be located in the upper floors. The residents will have the most privileged views on the area.
Leinelä Tower works as a small city. We have placed common functions such as a residents’ club, a gym with saunas, and a panoramic restaurant with a projection room along the tower. From the tower one has high-speed internet access. We want to encourage e-working, so we plan a number of meeting rooms to be used by students and workers. A number of special apartments with care facilities are planned for elderly people. An underground shuttle service will collect the inhabitants of Leinelä to take them to the station in winter.

The Urban Plaza in front of Leinelä Tower is diagonally split over two levels. The top level is placed at the height of the railway platforms, becoming a perfect display of culture and performances, and transforming each passenger into a spectator. This allows for the parallel use of the Plaza and 150% usage of the surface, as we can place the day nursery and parking garage under the elevated part.
The slight inclination of the urban plaza (3%) allows the placement of cafes and markets; at the same time, it collects the people coming from Leinelä at ±0.00 and leads them smoothly to the station at +4.70.
Where the two levels of the Plaza meet, we placed a transportation hub for  people coming from the parking area: the final shuttle stop, the Plaza, the street, passengers on their way from/to the station, the taxi ranks and bus stops, and the residents of Leinelä Tower. The station is a continuation of the urban Plaza. The main entrance to the tower is positioned at this level so residents can access the station directly.
Following the Plaza we design the orthogonal park, where nature is planned in a grid, contrasting with the surrounding forest.
Running parallel to the Park and the Plaza and ending at the train platform a covered passage will protect the passengers and cyclists from Leinelä during the winter. 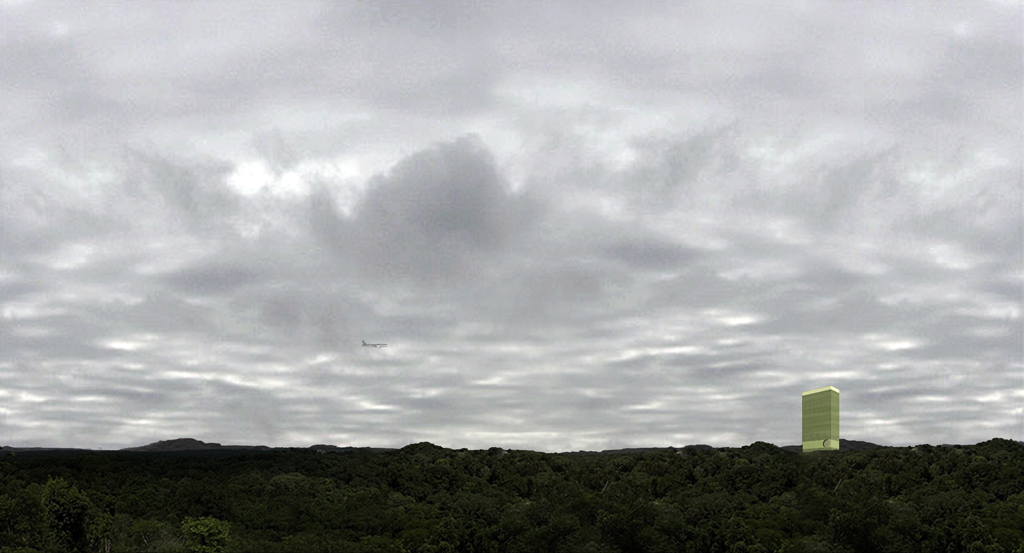 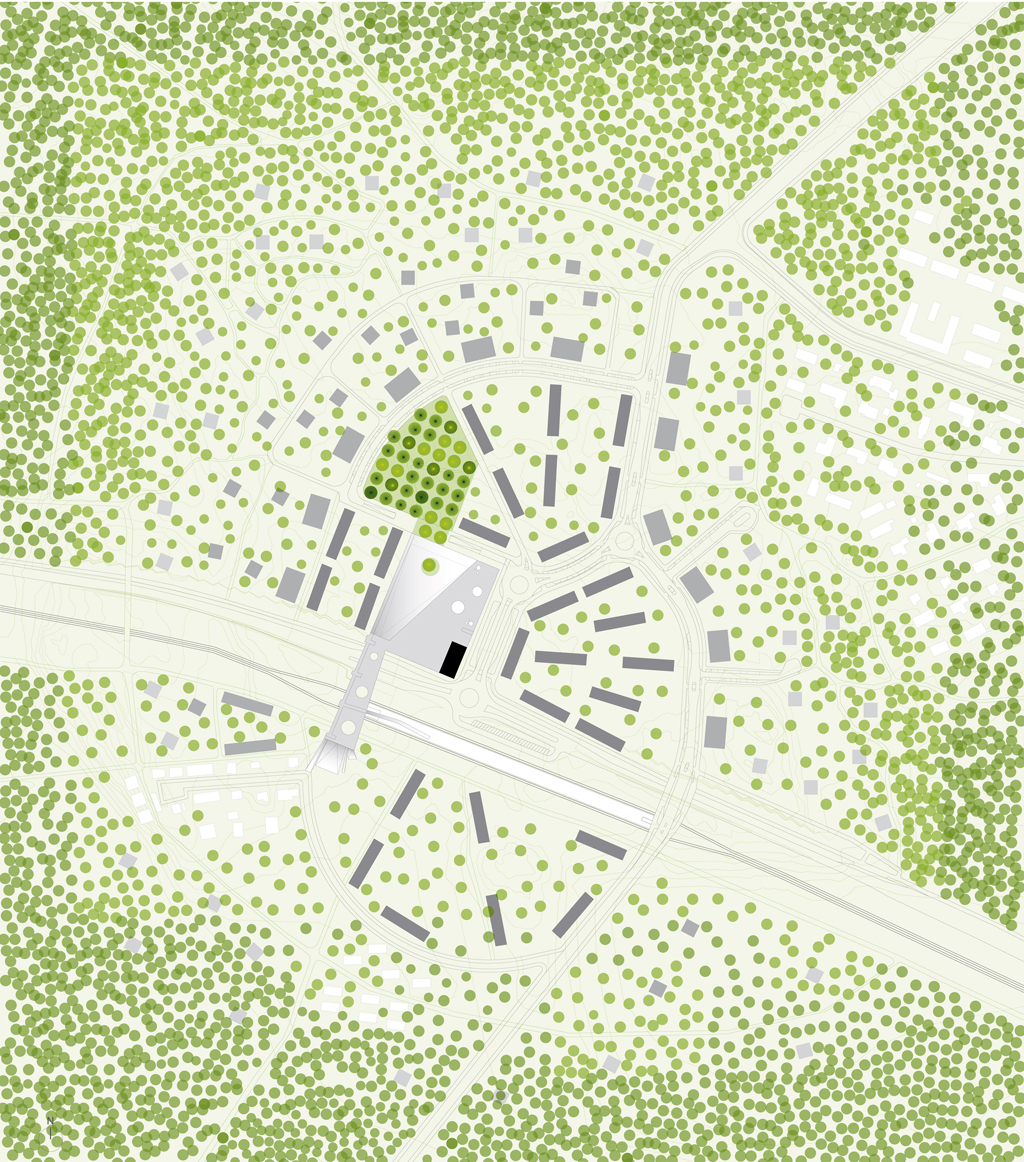 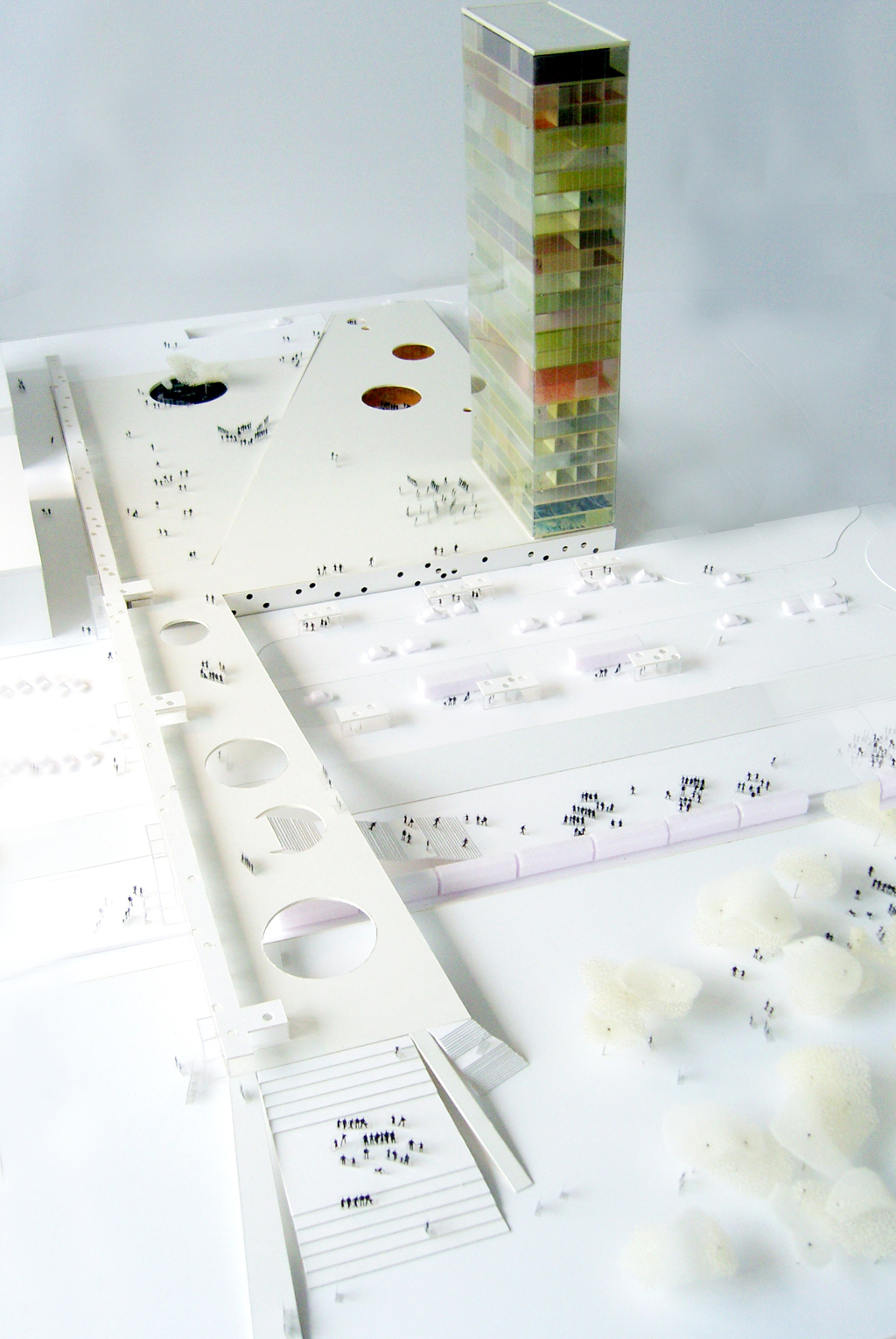 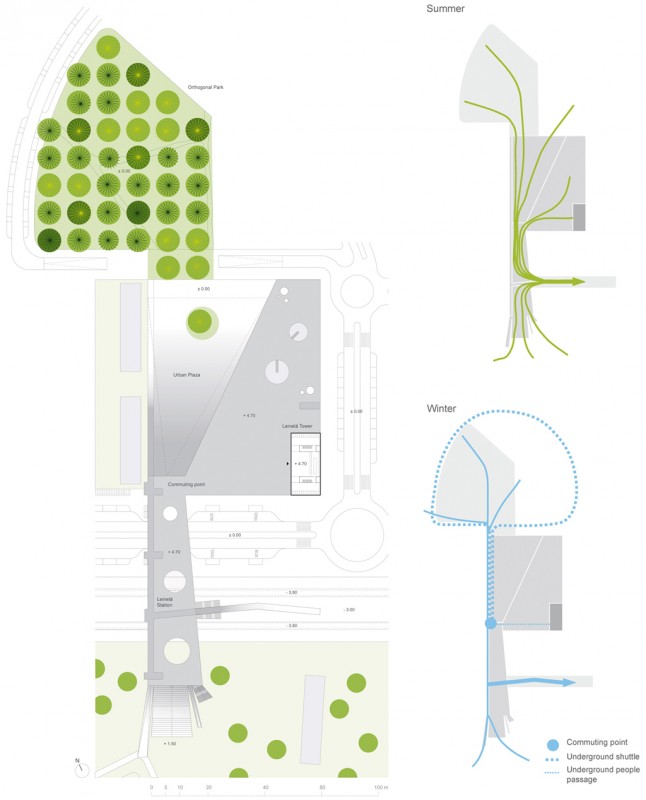 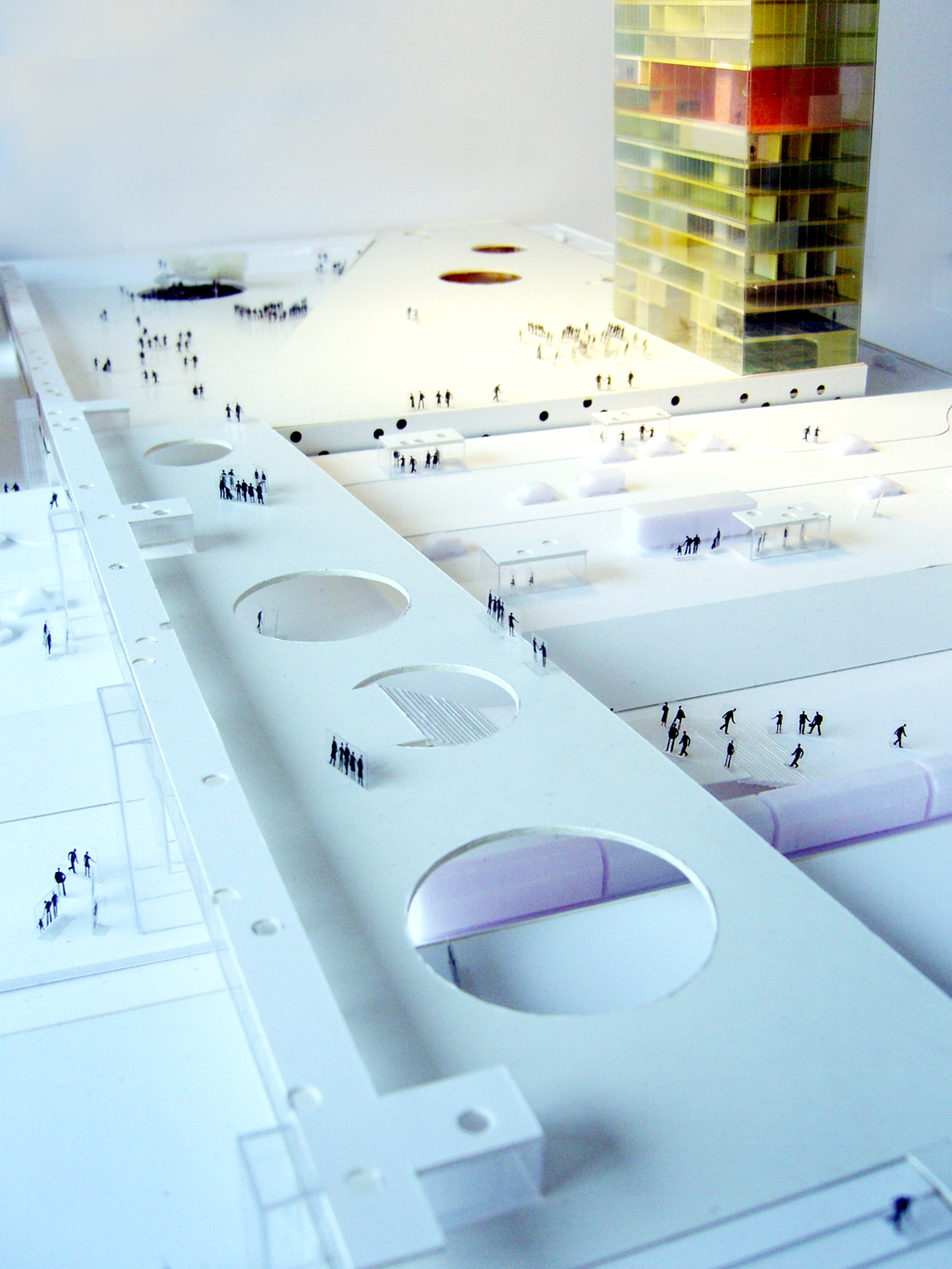 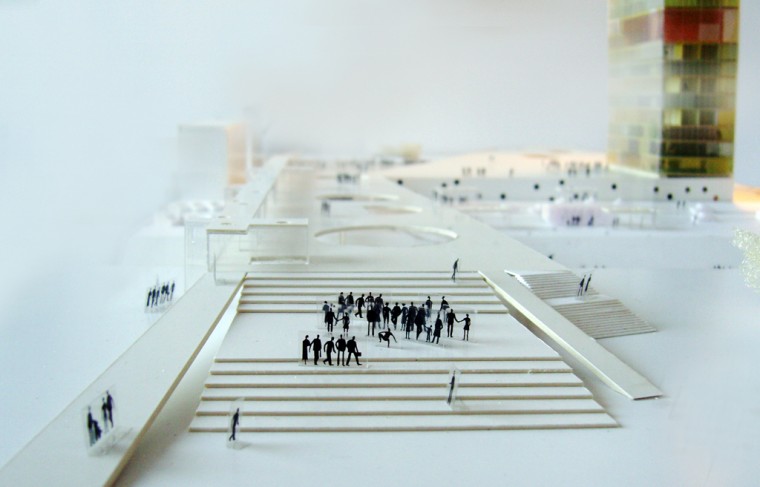 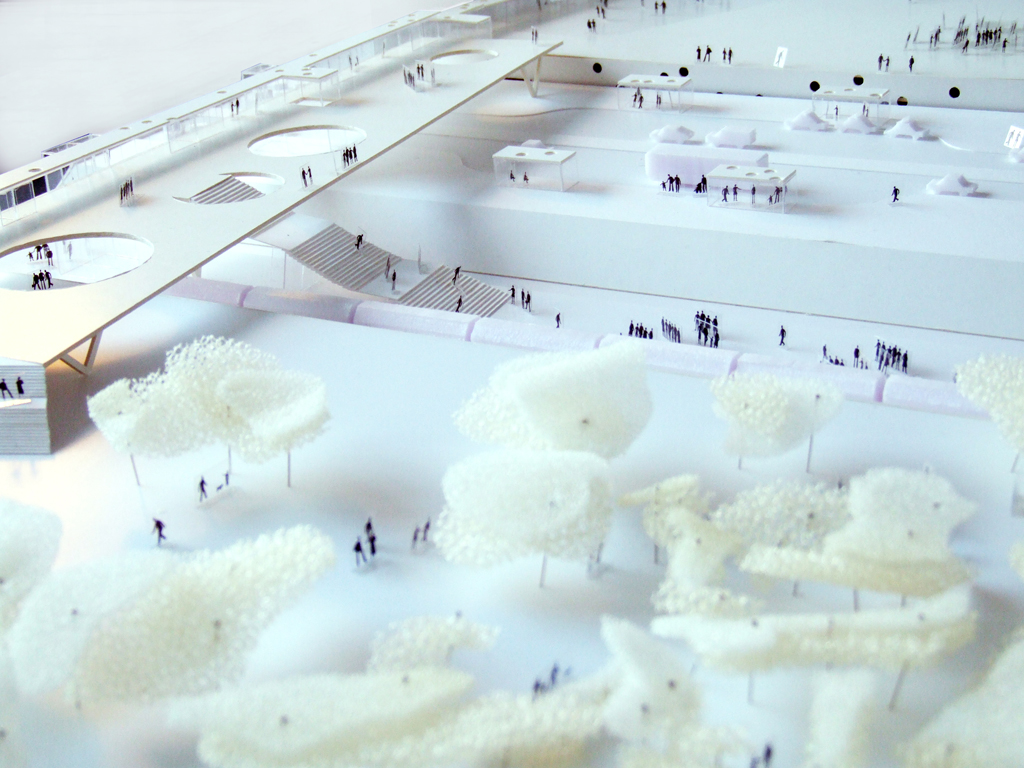 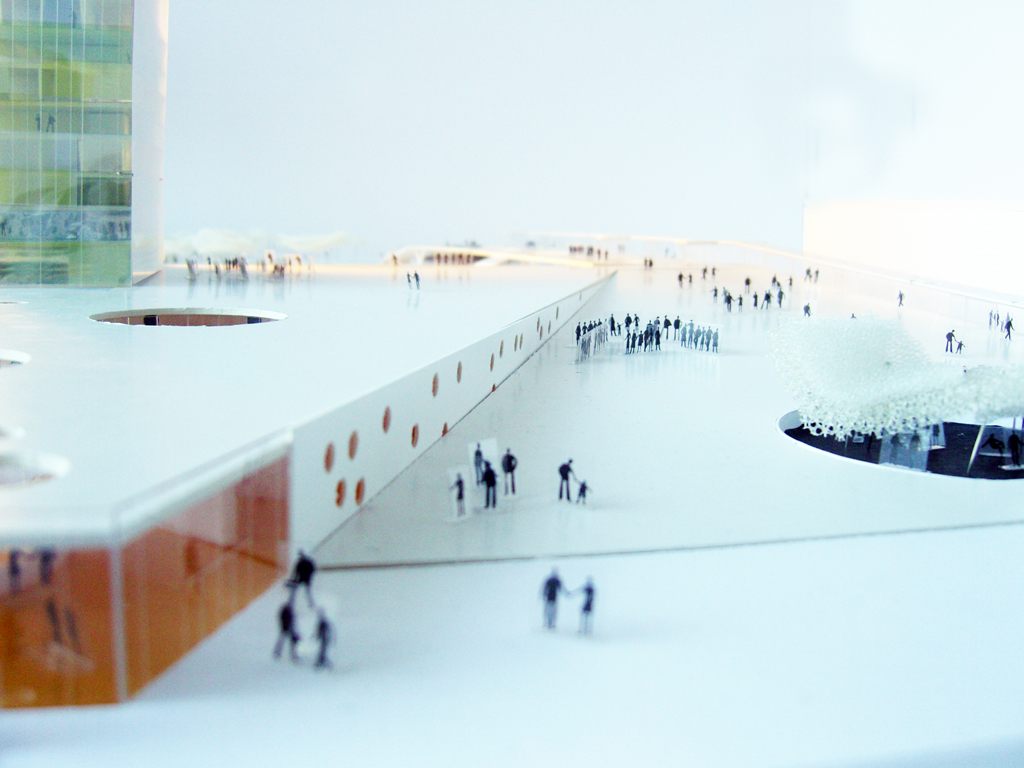 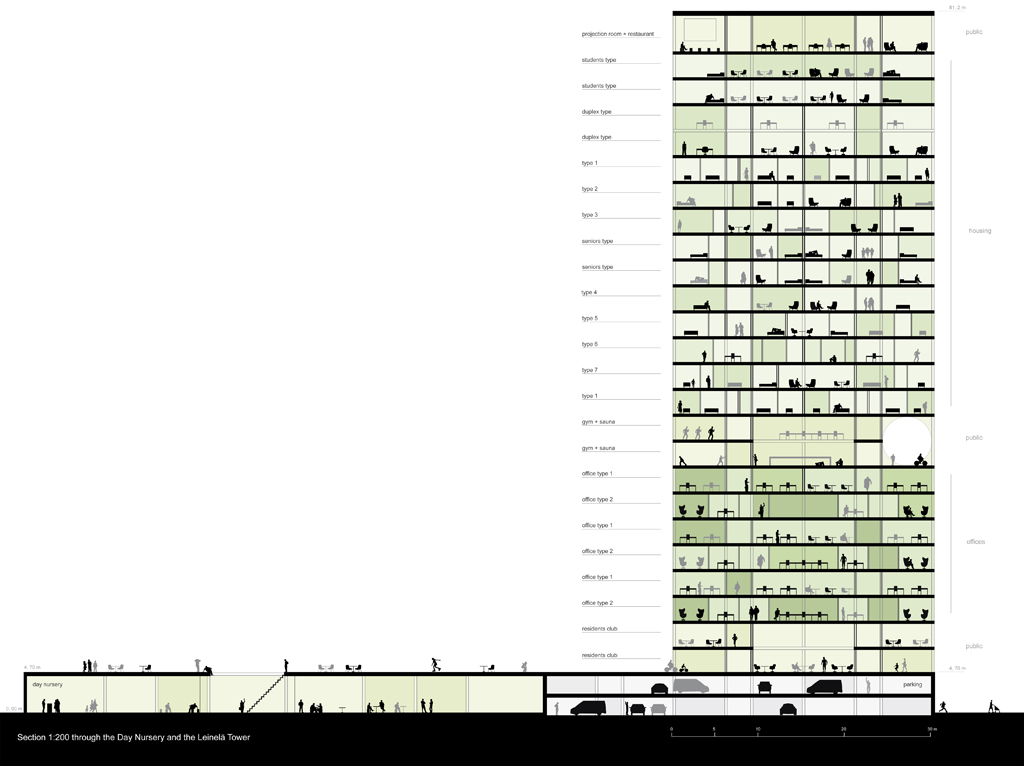 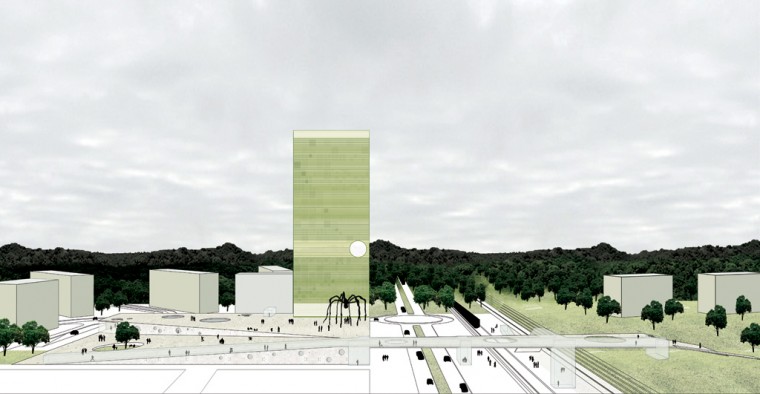 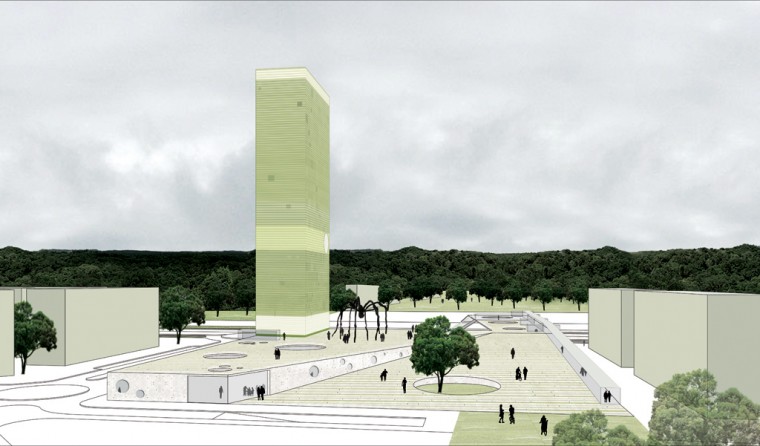 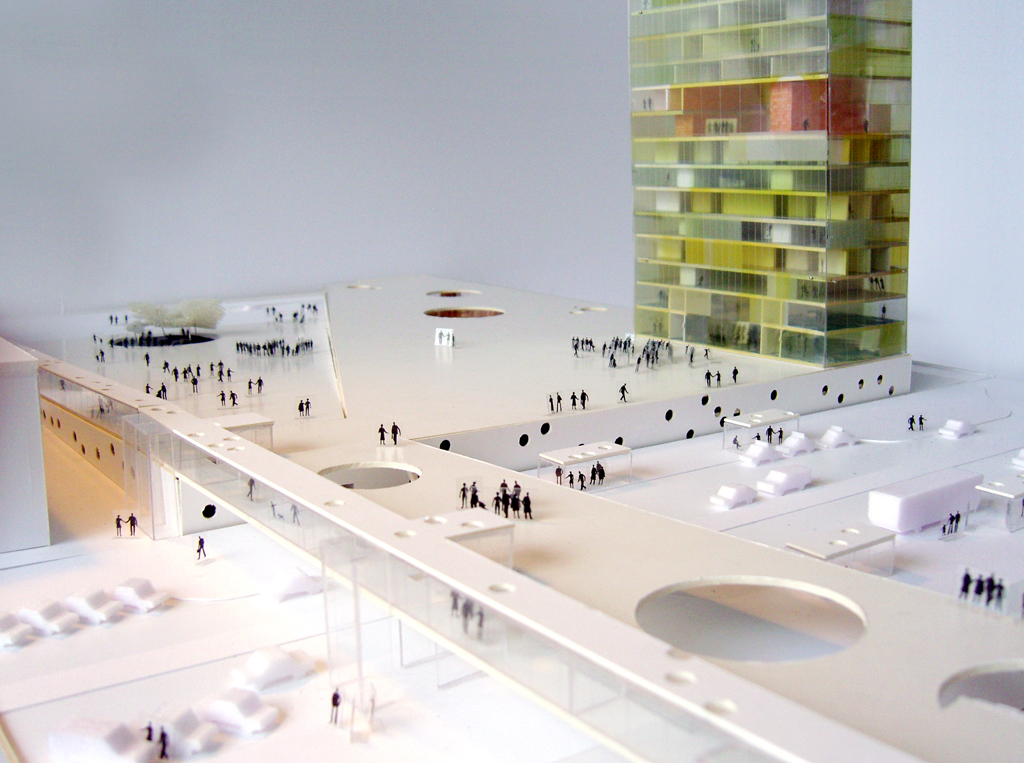 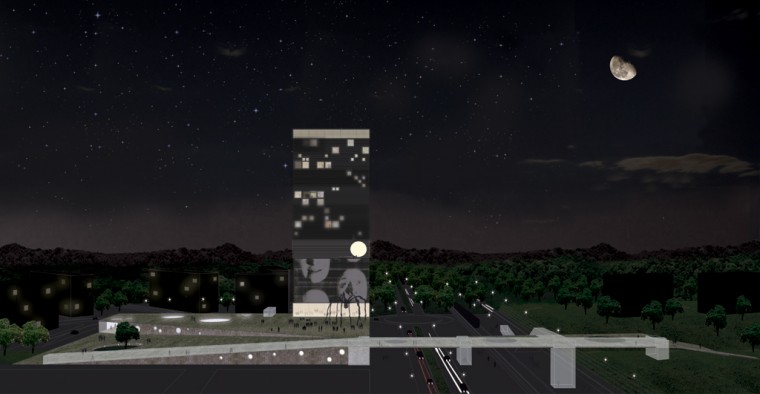 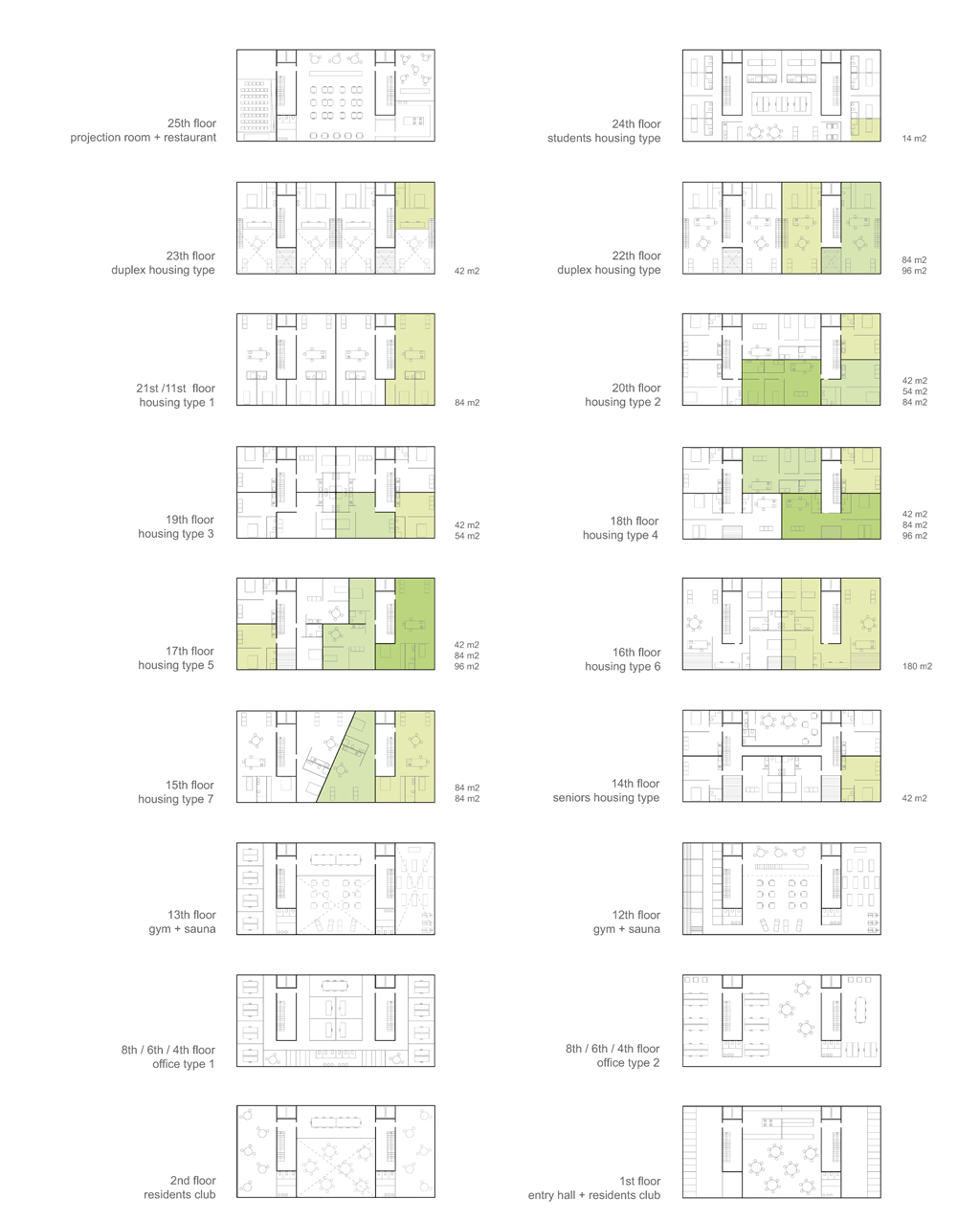 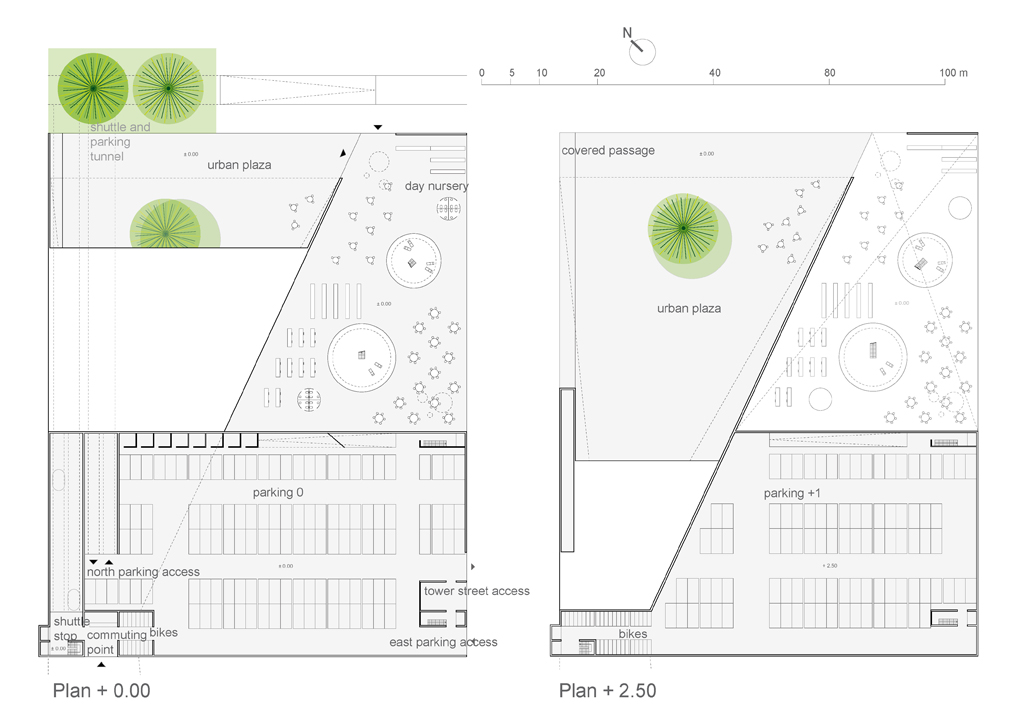 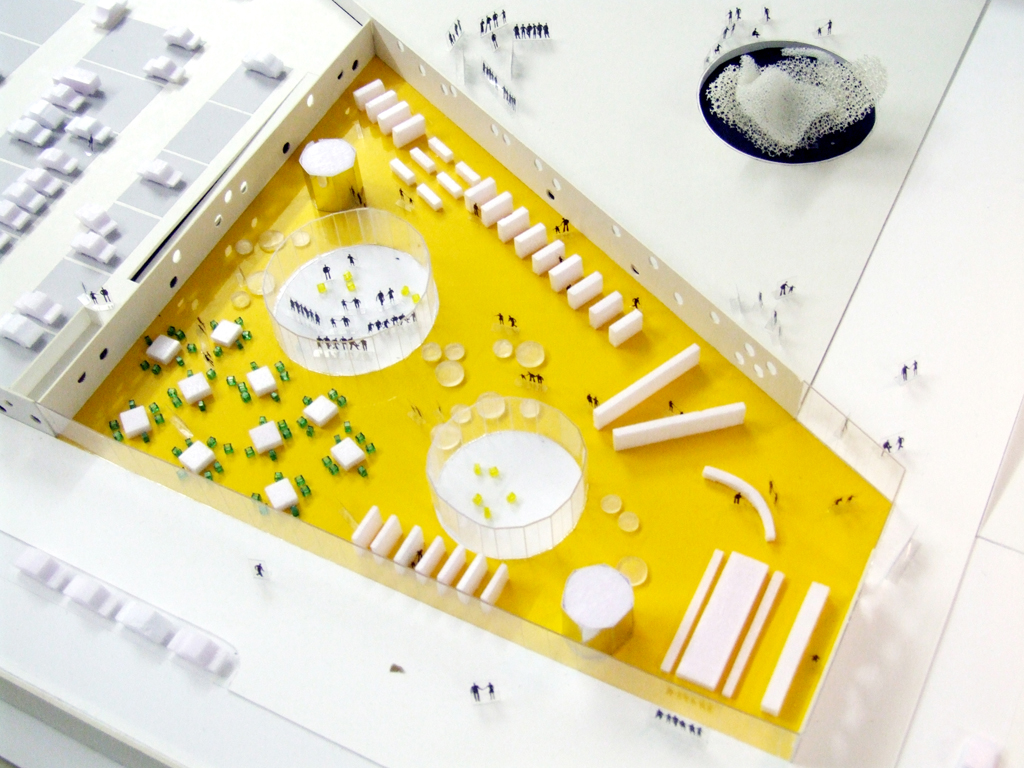 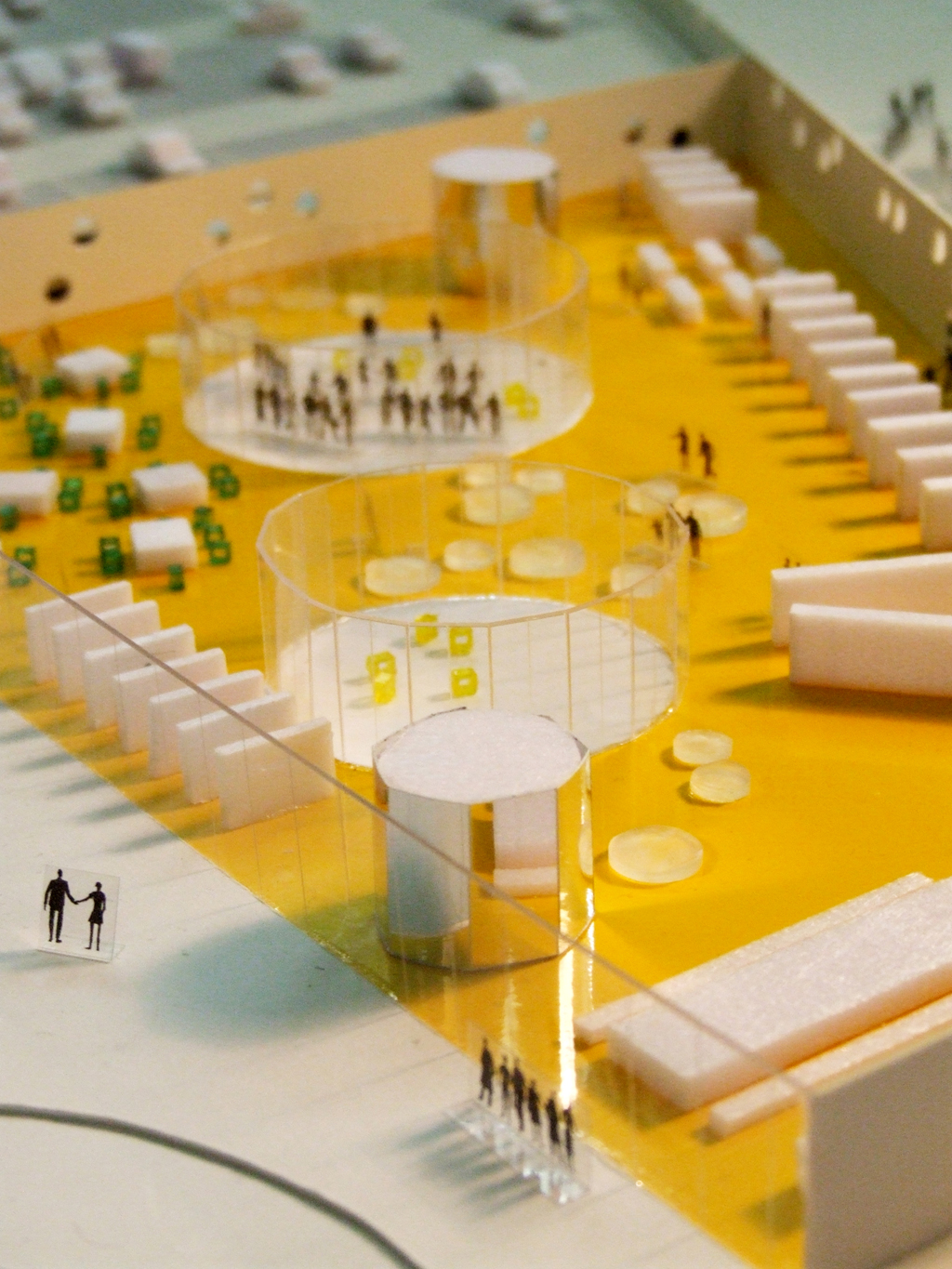 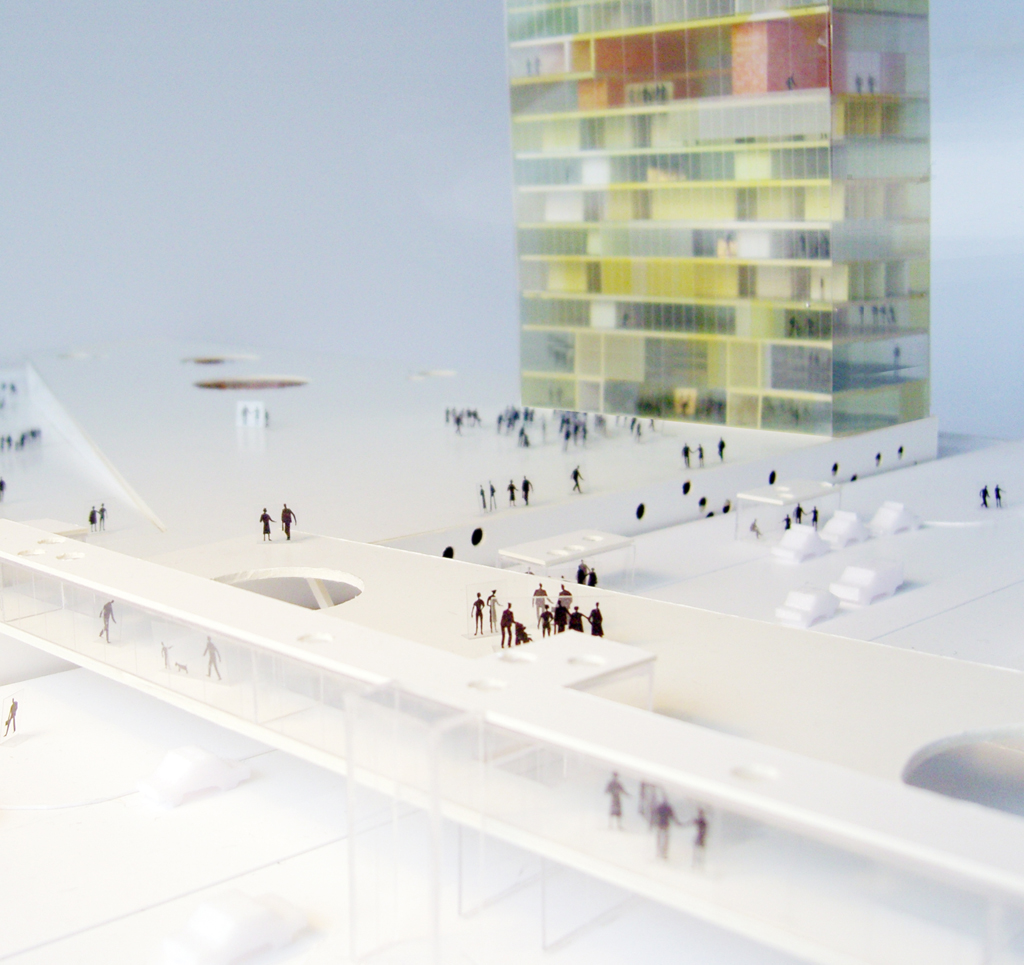 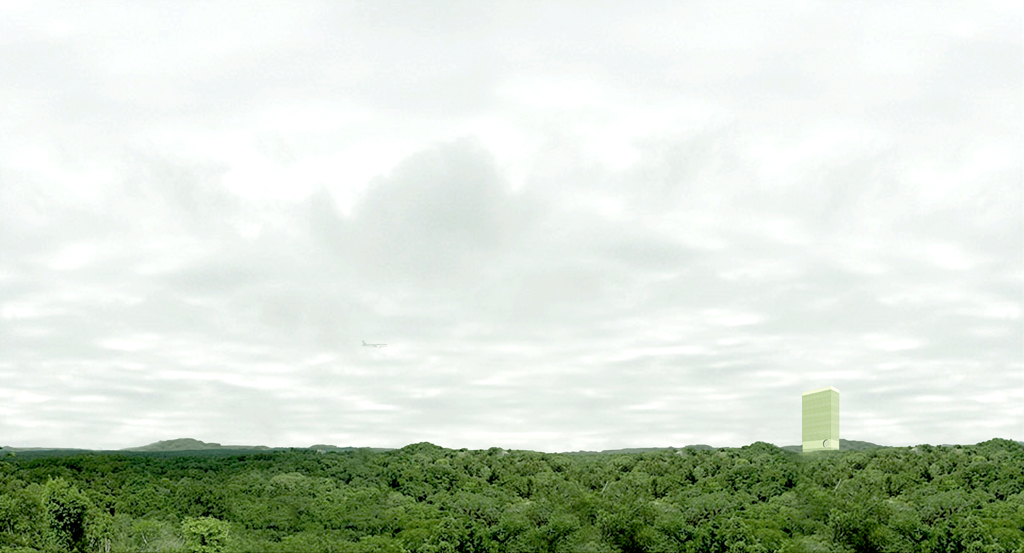 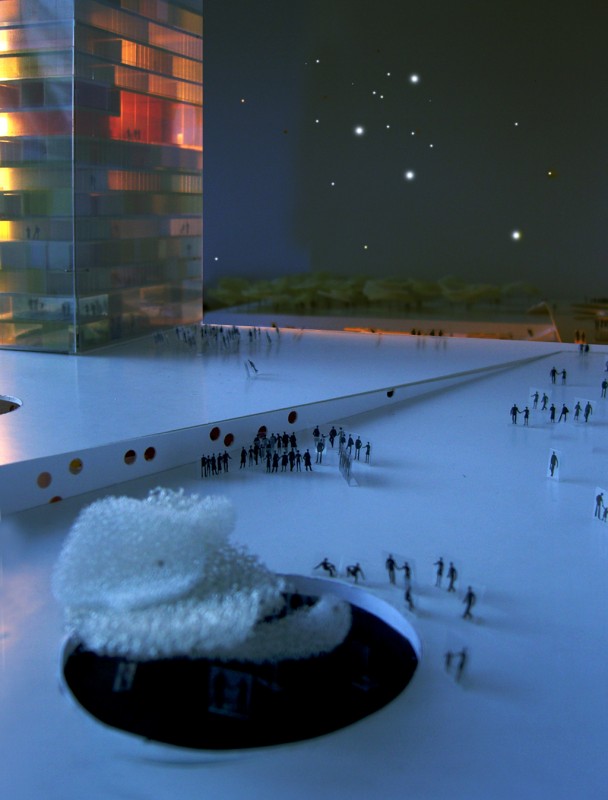 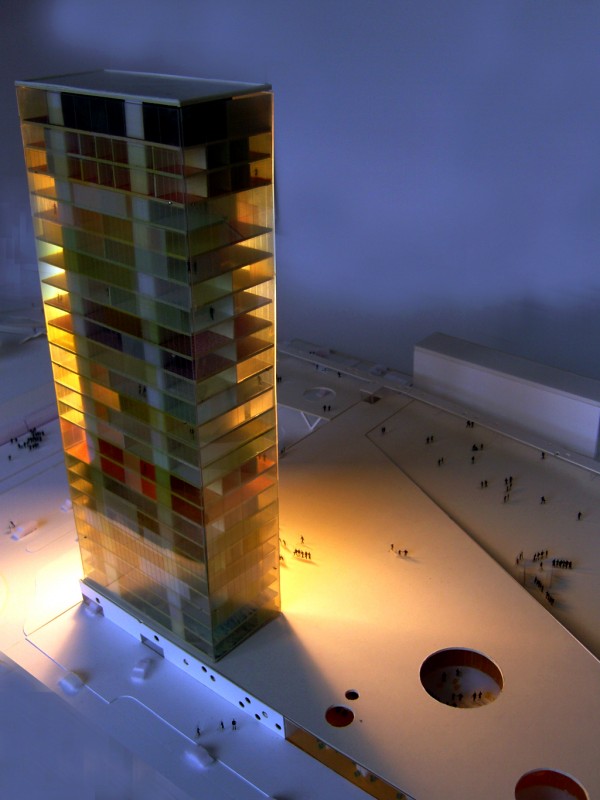 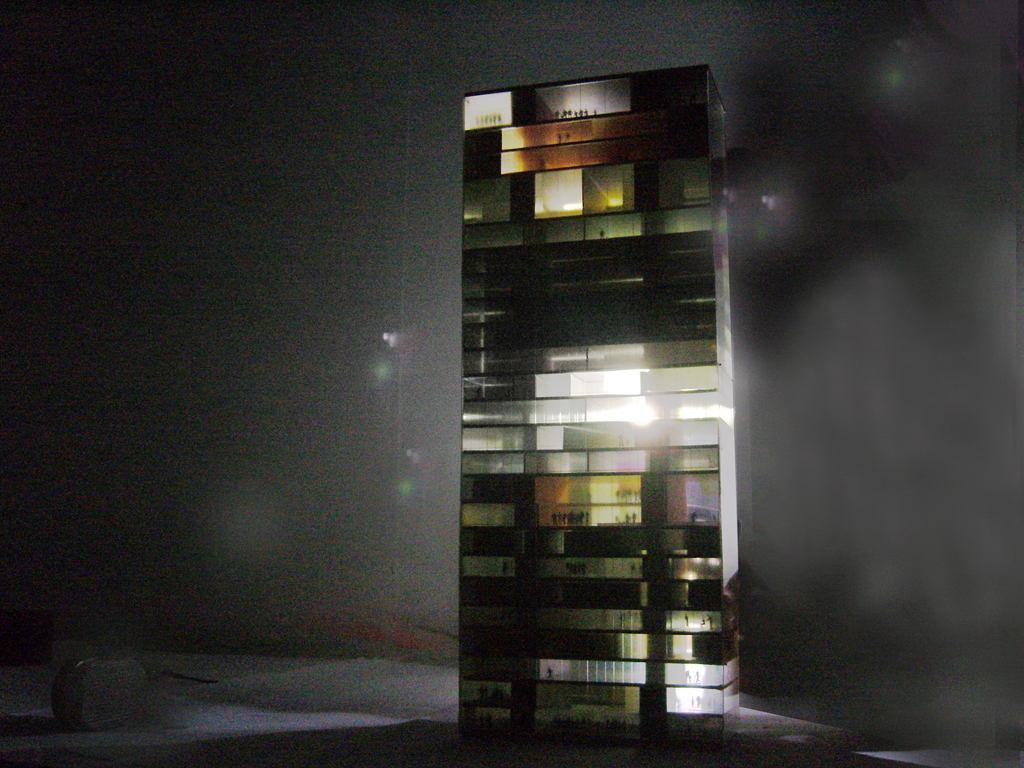