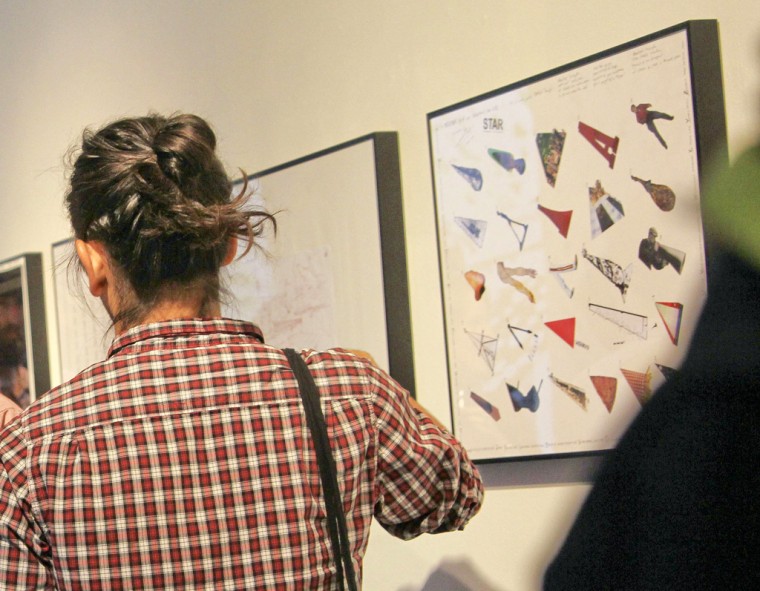 Beatriz Ramo is one of the thirty invited architects/artist to take part on the exhibition Aesthetics / Anesthetics at the Storefront from June 27 to July 28. The opening will be on June 26 at 7 pm.
STAR was invited by Storefront´s director Eva Franch i Gilabert to send a drawing or any other representational method relevant to represent/generate the Storefront for Art and Architecture today. STAR delivered a piece entitled: Metaphor A-Z + 5´ poem: Beautiful Triangles. Each of the 30 commissioned architectural drawings will be auctioned at the end of the exhibition.

I_ In the invitation letter about the upcoming exhibition at the Storefront: Aesthetics/Anesthetics, Eva Franch asked me to participate by making a ‘drawing’ of the Storefront’s gallery space including a plan, a section, an elevation or any other representational method (…).

II_ While reading about Storefront I quickly came across this humorous sentence from The New Yorker about the gallery: The place is shaped like a slice of pizza, and it’s not much bigger, but there’s nothing small about the visions on view at Storefront for Art and Architecture. (…)
III_ Metaphors!

Metaphors are a frequently recurring instrument for many architects when communicating their projects. But too often metaphors are confused with concepts and then architecture unavoidably falls into banal, corny, and predictable associations, reducing the intrigue of a project to a dull one-liner.

IV_ My piece for the Storefront is a satirical collection of Storefront metaphors; from the inspiring NY pizza slice to a Spanish Jamón Ibérico; all of them triangles aiming to remind us of the iconic triangular plan of the Storefront.

V_ How many triangles and in which order? I found the answer in the Storefront’s inaugural event in 1982: Performance A-Z, and I made an alphabet of metaphors: Metaphor A-Z.

VI_ It seemed redundant to explain a satire, so I wrote a five-minute poem entitled: Beautiful Triangles.

VII_ I cut, glued and wrote it by hand 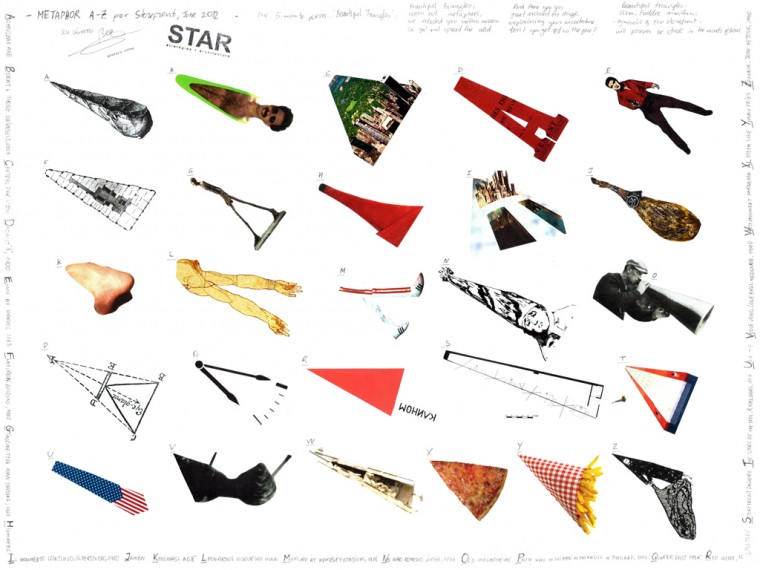 Beautiful triangles,
worn out metaphors;
we entrusted you with a mission:
so go! – and spread the word

And there you go,
great architect on stage,
explaining your architecture,
don’t you get red in the face?

Beautiful triangles:
pizza, Freddie and Rem,
symbols of the Storefront,
will forever be stuck in the minds of them.
– – – –  Scroll down to read more information about the exhibition – – – – 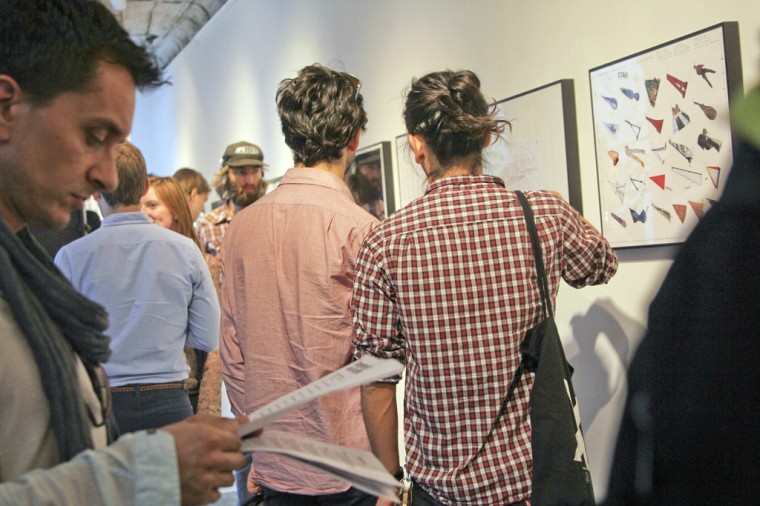 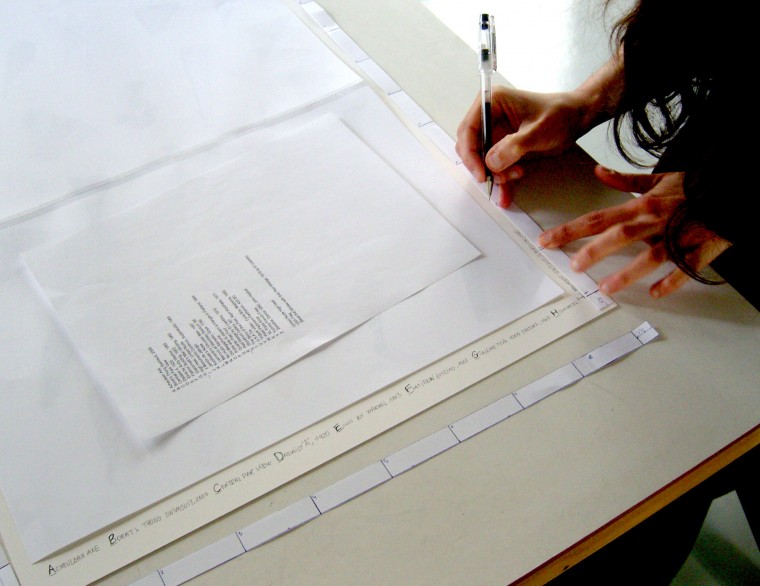 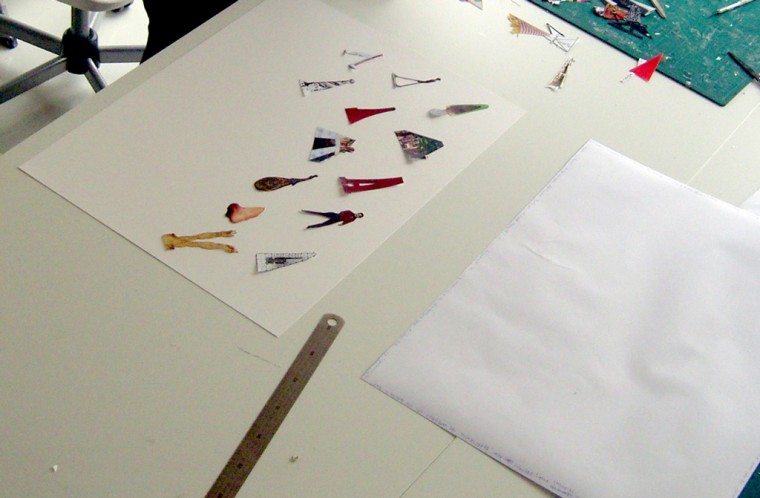 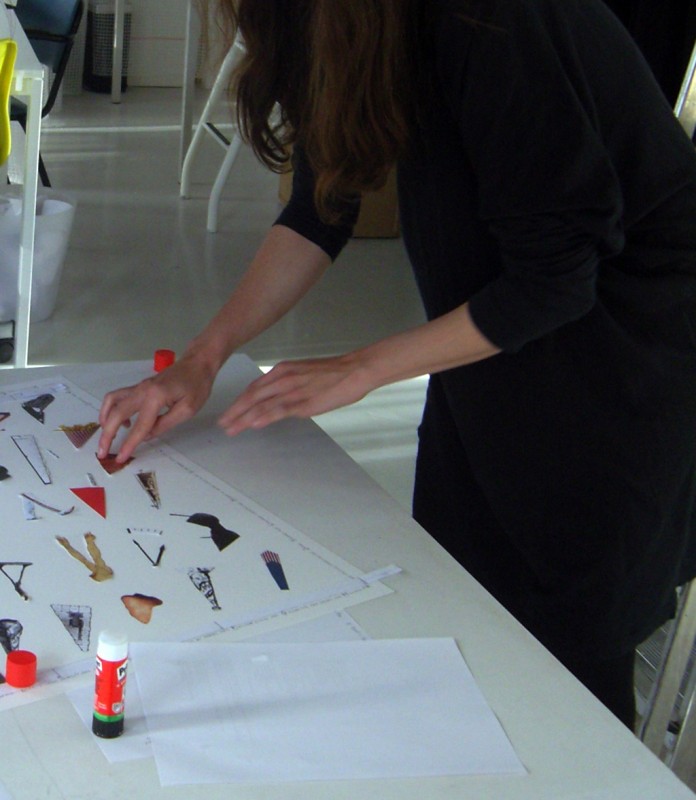 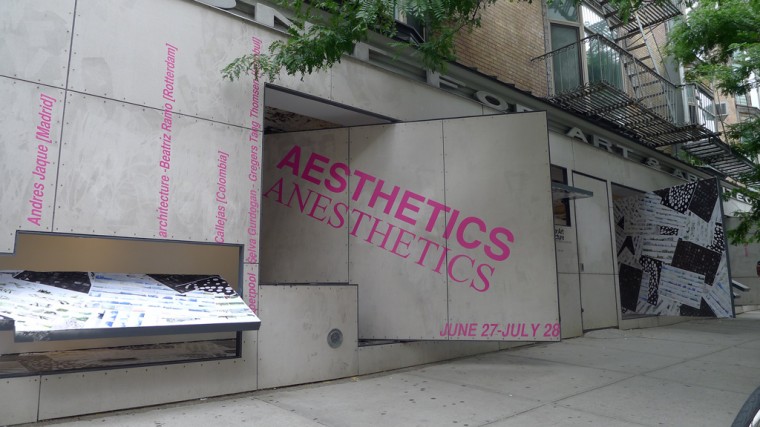 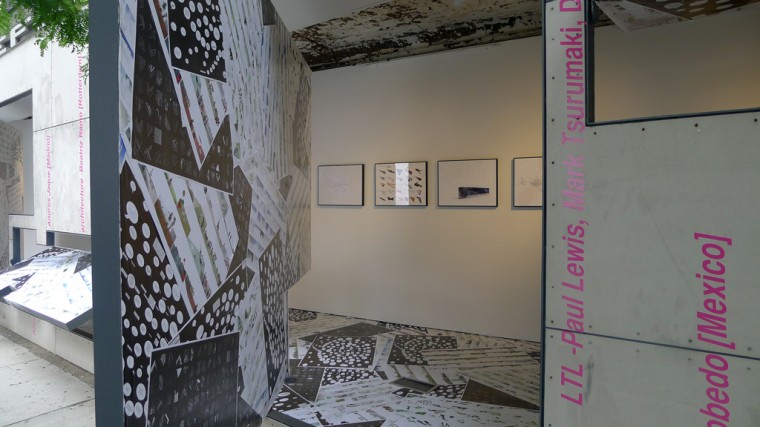 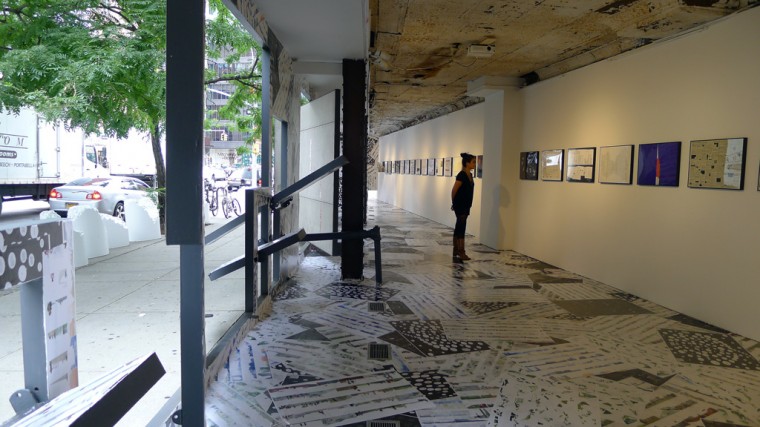 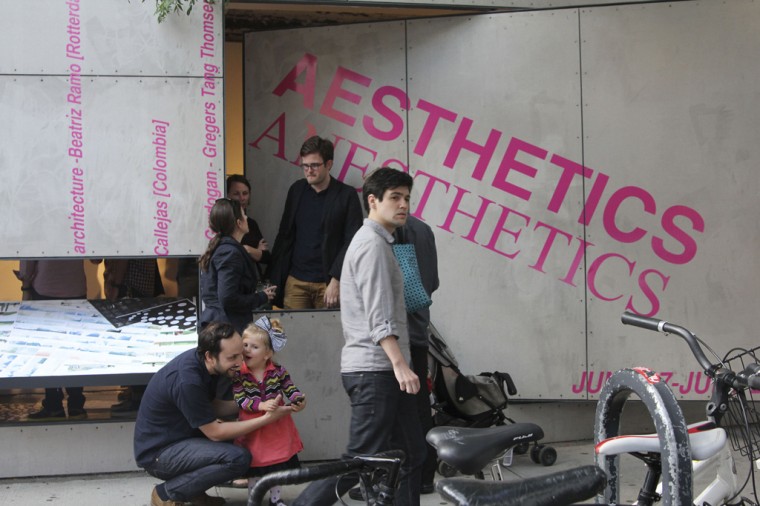 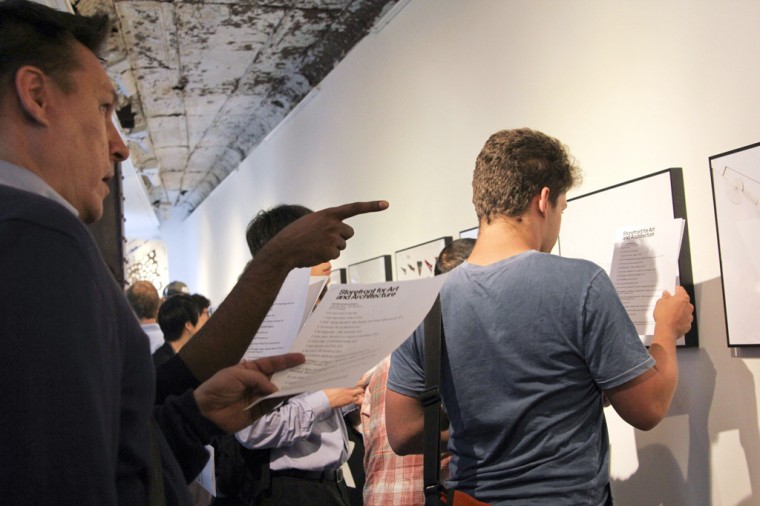 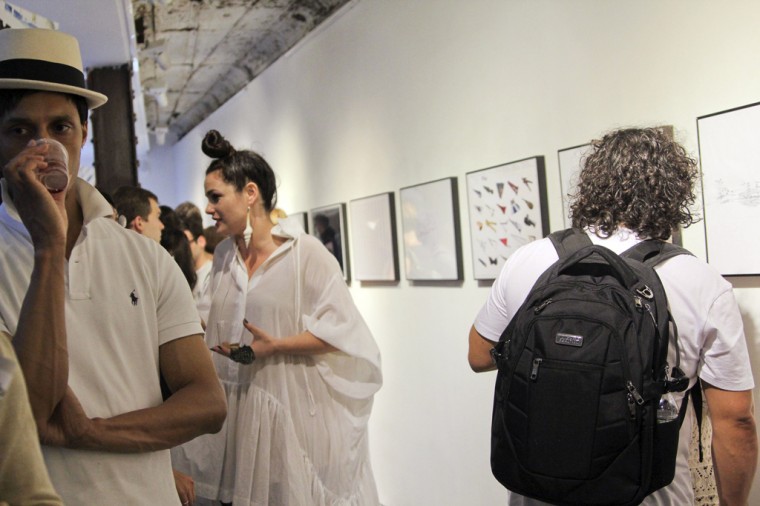 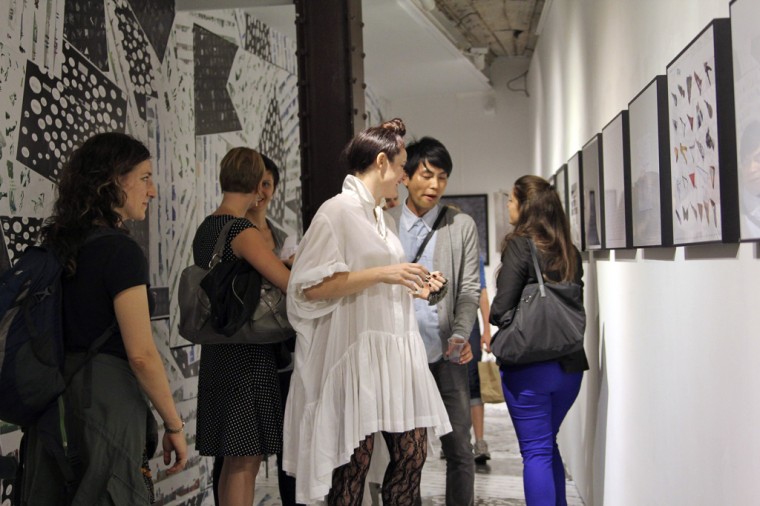 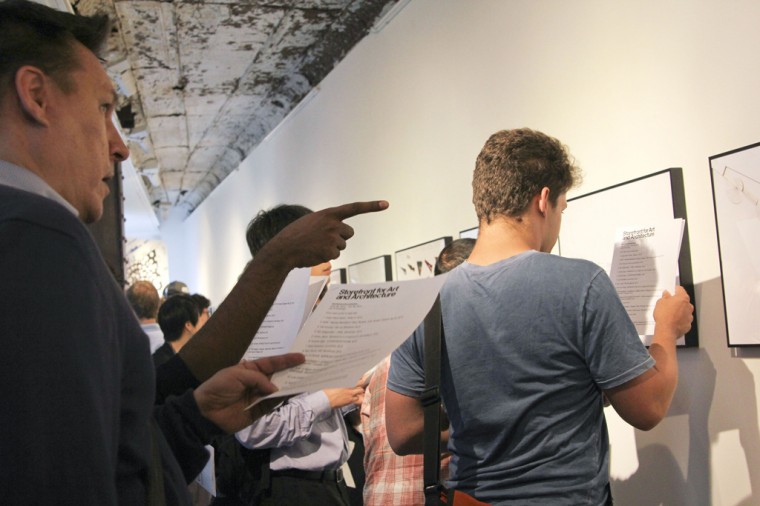 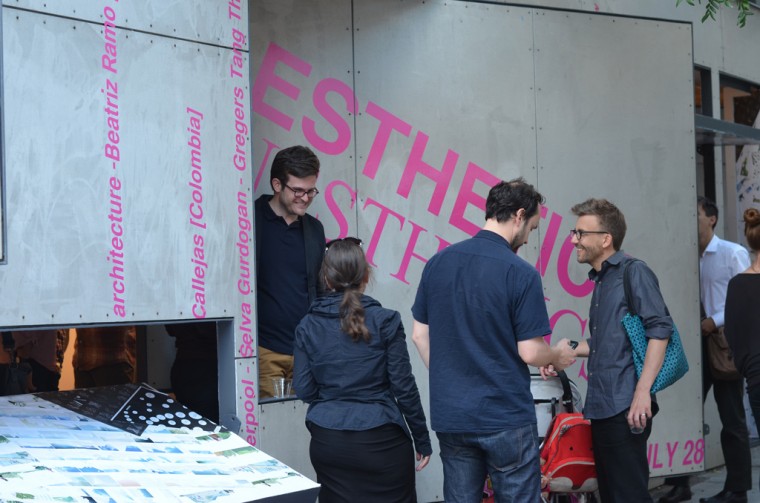 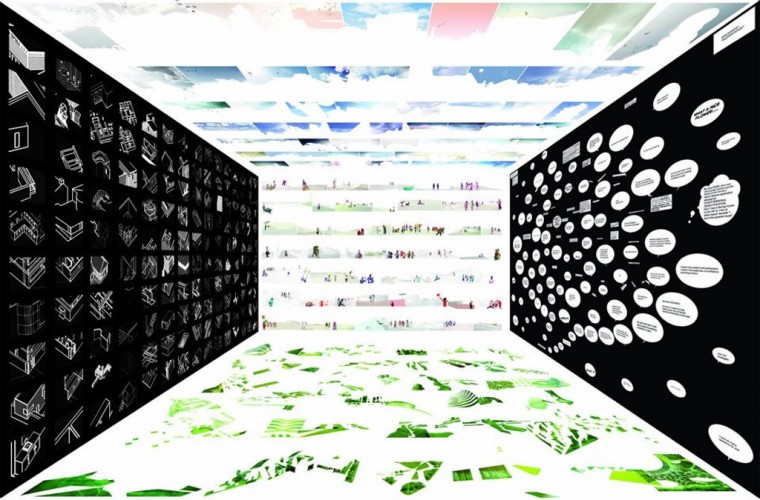 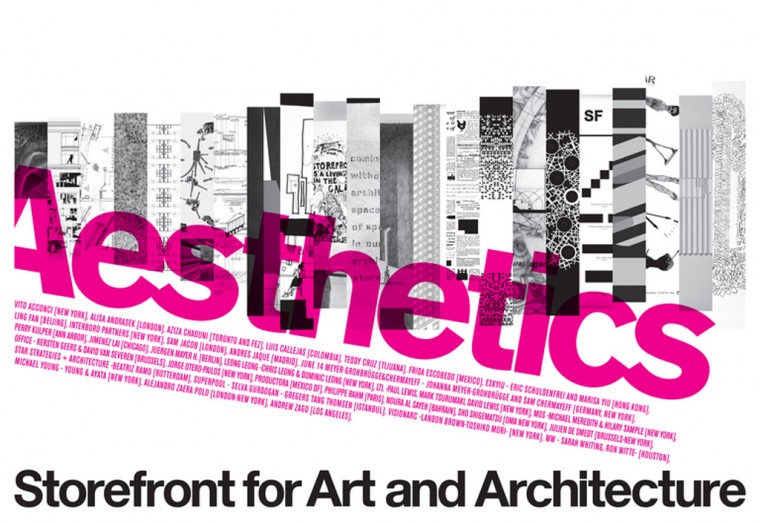 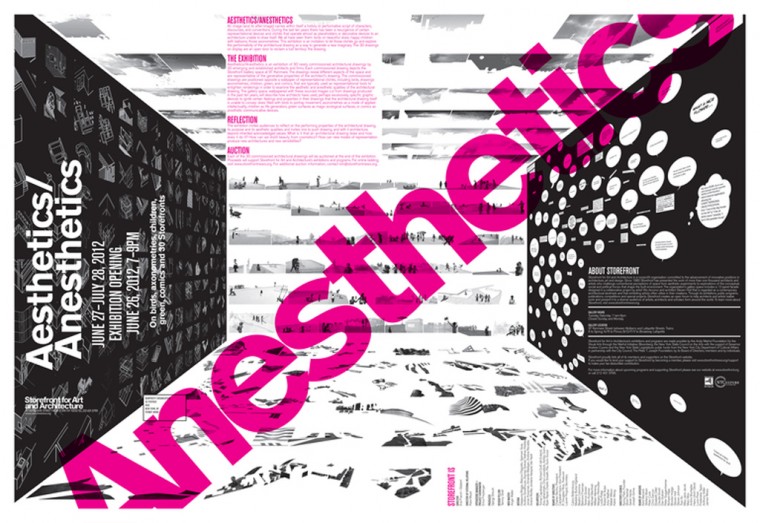 What is it that an architectural drawing does and how does it do it? How can we distill beauty from cosmetics? How can new modes of representation produce new architectures and new sensibilities?

Aesthetics/Anesthetics is an exhibition about architectural drawings.

Aesthetics/Anesthetics  invites audiences to reflect on the performing properties of architectural drawings, their purpose and aesthetic qualities, encouraging the architectural community and other creatives to push drawings, and with it architecture, beyond inherited acknowledged values. An image [and its after-image] carries within itself a history [or performative script] of characters, discourses, and conventions. During the last ten years there has been a resurgence of certain representational devices that have become architectural clichés operating almost as placeholders or decorative elements of an architecture unable to draw itself. We all have seen them: birds on beautiful skies, happy children with balloons, those axonometries… this exhibition is an invitation to let those clichés go and explore the performativity of the architectural drawing as a way to generate a new imaginary. The 30 drawings on display are an open door to reclaim a lost territory: the drawing.

The centerpiece of the exhibition is a collection of 30 newly commissioned architectural drawings. Each drawing depicts the Storefront Gallery space at 97 Kenmare, from the perspectives of a diverse group of emerging and established architects worldwide. The drawings reveal a different aspect of the space and are representative of the generative properties of the architect’s drawing. The gallery space, wallpapered with sourced images of birds, axonometries, children, green and comics cut from drawings produced in the past five years, reflects on the specific graphic devices used by architects to ignite certain feelings and properties in their drawings that the architectural drawing itself is unable to convey: skies filled with birds to portray movement, axonometries as a mode of applied intellectuality, children as life generators, green surfaces as magic ecological surfaces, or comics as prosthetic communicative devices.

A series of lectures and workshops that reflect on the purpose of the architectural drawing will be presented during the exhibition. Details will be posted here at a later date.

Each of the 30 commissioned architectural drawings will be auctioned at the end of the exhibition. Proceeds will support Storefront for Art and Architecture’s exhibitions and programs. For information on the auction, please email info@storefrontnews.org.