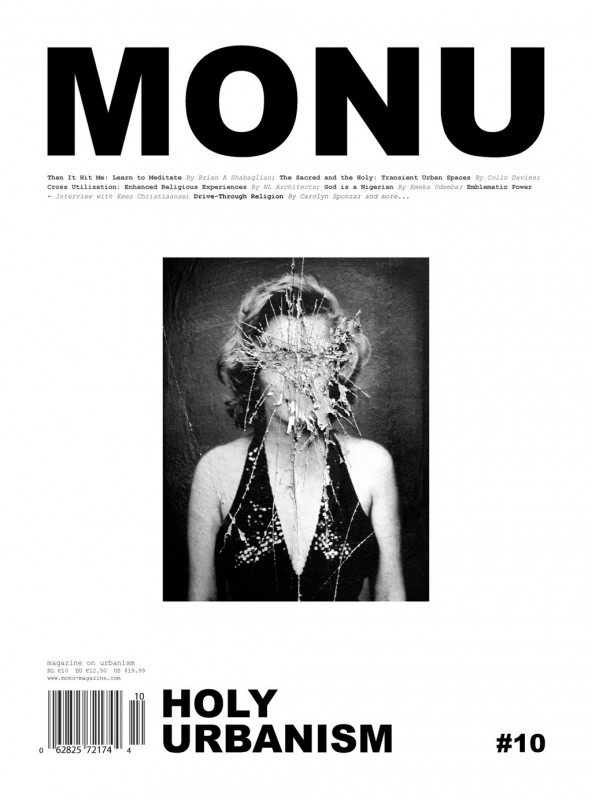 Contents:
A Mormon Megaproject by Daniel Hadley
Then It Hit Me: Learn to Meditate by Brian A Shabaglian
The Sacred and the Holy: Transient Urban Spaces by Colin Davies
Cross Utilization: Enhanced Religious Experiences by NL Architects
Strata and Sound: The Adhan as an Urban Operating Procedure by Peter Dorsey
The Sensory Experience of Sacred Space: Senso-Ji and Meiji-Jungu, Tokyo by Raymond Lucas
Peace Through Superior Horsepower by Speedism
God is a Nigerian by Emeka Udemba
Emblematic Power – Interview with Kees Christiaanse
Sacred Wire by Elliott Malkin
The Mormon Church’s Infrastructure of Salvation by Jesse LeCavalier
Do not give up Hope! by Maurizio Scarciglia
[uhn-hoh-lee] Alliance: A Domain of Objects by Edward Richardson
Drive-Through Religion by Carolyn Sponza
Urban Rituals by Abha Mahajan
Sacred Beauties by Karen Crequer
Strucked by a Freak Wave by Matilde Cassani

More info about this issue HERE
browse the entire issue #10 on YouTube
order MONU#10 at publishers@b-o-a-r-d.nl

Editorial by Bernd Upmeyer, Editor-in-Chief, February 2009:
Can the view on cities get any bigger than through religion? Probably not. But we believe that a magazine on urbanism such as MONU, that appears only twice a year, can never have a too open perspective. Although the picture in this issue is big, and the contributions are diverse and have different focuses, one thing can be found that runs through almost this entire issue on Holy Urbanism. It is the conviction that Holy Urbanism in the contemporary city does not appear, and is not created any longer, merely by religion itself, but rather by a crossbreed of religion and economy. How such Holy Urbanism can be produced is explained by Daniel Hadley, for example, through the City Creek Center in Salt Lake City that quite clearly defies the dichotomy between market and temple cities, in his article “A Mormon Megaproject”. Thus, the City Creek Center is designed to be a centre of consumerism and economic production, whose purpose, nevertheless, is to ensure vitality in front of the nearby Temple Square. Sacred and commercial spaces seem increasingly to coalesce and create a kind of Foucaultian Heterotopia, an environment that is capable of juxtaposing in a single real place several spaces and several sites that are in themselves incompatible, as Colin Davies points out in his contribution “The Sacred and the Holy: Transient Urban Spaces”. Peter Dorsey in his piece “Strata and Sound: The Adhan as an Urban Operating Procedure” argues that contemporary Holy Urbanism is flourishing especially at places where religion is creating a hybrid together with capitalism. As an example he mentions the Lakewood Church Central Campus in Houston, Texas that can seat more than 16.000 worshipers, adapting efficiently into a spectacle-based environment by satisfying multiple consumer appetites simultaneously. In the Nigerian city of Lagos the hybridisation processes of religion and the market have even transformed the urban space itself into a battlefield, in a free market where religion is a commodity to sell and an urban survival strategy, as Emeka Udemba concludes in his “God is a Nigerian”. Within such a capitalistic realm, religious buildings follow an increasingly territorial logic that is similar to capitalistic corporations or franchises such as McDonald’s or Starbucks. The Church of Jesus Christ of Latter-Day Saints, for example, standardized the design of their temples and thus created a generic network of identical buildings that are spread out – Starbucks-like – all over the planet, as Jesse LeCavalier illustrates in his article “The Mormon Church’s Infrastructure of Salvation”. Carolyn Sponza, in her contribution “Drive-Through-Religion”, even states that in the United States, planning a church and a shopping mall always begins with the same capitalistic question – how much parking the site can accommodate. Such an attitude leads in a lot of cases to the design of big box, Ikea-like, building types that are perfectly located along a suburban highway. But religious big boxes nevertheless – though convenient and visible – force visitors to seek them out, park their cars, and walk toward their front doors. And if you don’t think it’s for you, you can keep driving along the highway until the next big box containing another religion grabs your attention. Such Holy Urbanism promotes religious choice and makes multi-religious spaces possible that are flexible as pieces of fashion, as empty spaces for inter-religious dialogue that incarnate the belief in a multi-faith society and allow for openness, and heterogeneity as Karen Crequer reveals in her piece “Sacred Beauties”.