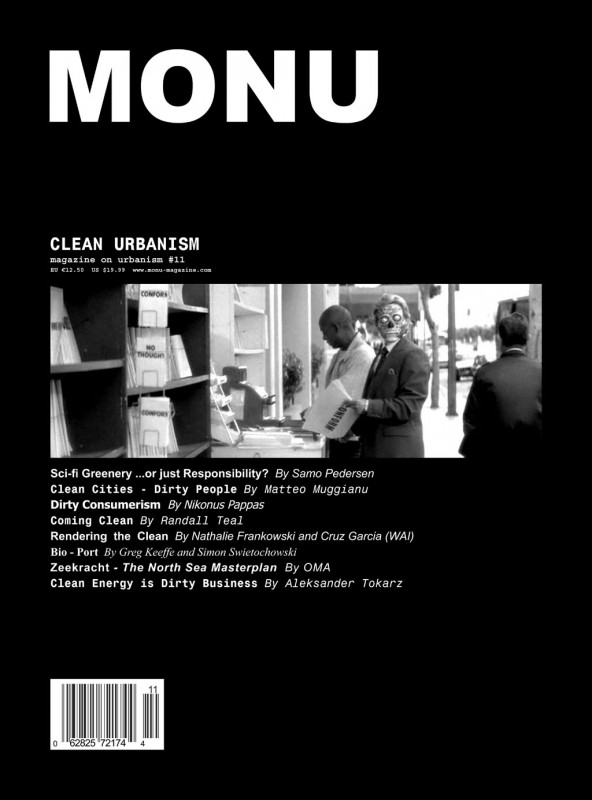 Editorial by Bernd Upmeyer, Editor-in-Chief, August 2009:
Do we simply have to stop having sex to produce Clean Urbanism, i.e. an urbanism that is dedicated to minimizing both the required inputs of energy, water, and food for a city as well as its waste output of heat, air pollution, CO2, methane, and water pollution? This is the question Samo Pedersen asks in his piece “Sci-fi greenery..or just Responsibility?”. In fact Randall Teal sees that the growth of world population is frequently ignored in discussions on sustainability, as he points out in his article “Coming Clean: Owning Up to the Real Demands of a Sustainable Existence.  Fewer people spend less energy and, as the gas and oil supply will come to an end sooner or later, saving energy may be a cheaper and smarter solution for cities than depending on renewable energies, as Gerd Hauser, one of the leading researchers on the implementation of the EU Directive on “Energy Performance of Buildings”, explains in an interview with us entitled “Domes over Manhatten”.  Although sustainability has recently become a cache misère for our lack of intent, a trendy make-up hiding our incompetence with Clean Urbanism being its apotheosis, as Nathalie Frankowski and Cruz Garcia (WAI) maintain in their contribution “Rendering the Clean”. Cities that are self sufficient, in term of energy, are technically possible, as Gerd Hauser states and explains using a five-point manifesto. Greg Keeffe and Simon Swietochowski also support that view; the “Bio-Port” project is a vision of a “Free Energy City” set in Liverpool, where the old dockyards have been transformed into bio-productive algae farms. Furthermore, the Office of Metropolitan Architecture illustrates in its project “Zeekracht – The North Sea Masterplan” how wind farms could be clustered along an Energy Super-Ring in the North Sea, distributing national surpluses and supplying regional energy needs efficiently and profitably. On the other hand, Clean Urbanism cannot only be understood from a purely technocratic perspective, but also needs a social one, as Claudio Astudillo Barra articulates in his article “Regenerative Ecologies – A Prototypical Approach to the Territory”, introducing Felix Guattari’s ideas of ecosophy. On such social aspects Rogier van den Berg focuses in his piece on “The Cooperative City”, where a community is created that triggers individual initiative and the cooperation of its users to generate collective values. The Cooperative City requires a flexible open-ended plan that is only guided by one set of rules, as described by Bryan Norwood and the Jackson Community Center in “Mania: An Emergent Sustainability of Density and Intensity”. Created by the disorganized hyperactivity of an actualized system with no specified, singular goal; a bottom-up phenomenon that emerges from the individual events of architecture within the city, combined with the ideology of urbanism conceived as anti-capitalism and anti-homogenization. It is mania, and mania is clean.