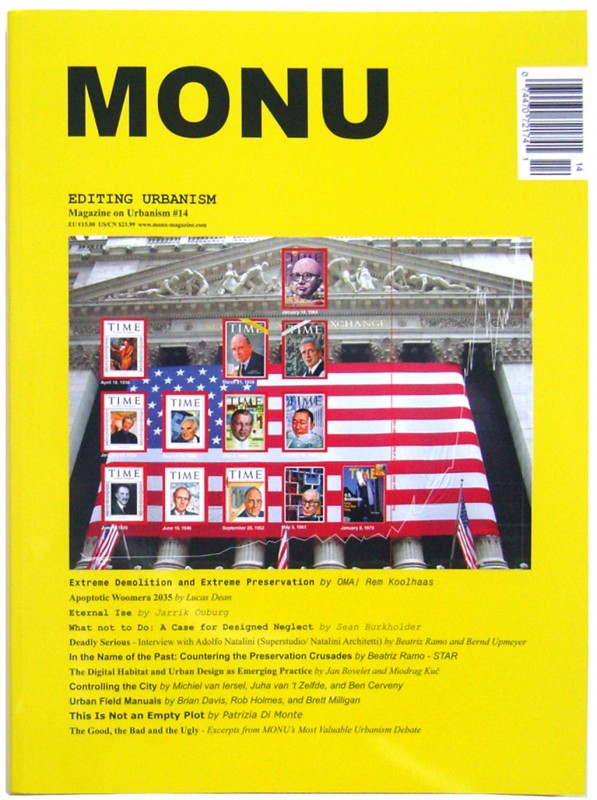 Contents:
The Naked Lunch: A Stark Honest Discussion On Renewal by UNION3;
On Politics of Planning by Henk Ovink; Beyond Editing by Simone Pizzagalli;
Extreme Demolition and Extreme Preservation by OMA;
Apoptotic Woomera 2035 by Lucas Dean;
Eternal Ise by Jarrik Ouburg; Moveable Chair by Sara Hendren;
What not to Do: A Case for Designed Neglect by Sean Burkholder;
Deadly Serious – Interview with Adolfo Natalini by Beatriz Ramo and Bernd Upmeyer;
In the Name of the Past by Beatriz Ramo – STAR strategies + architecture;
Cultural Editors by Paul Meurs and Marinke Steenhuis;
The Digital Habitat and Urban Design as Emerging Practice by Jan Bovelet and Miodrag Kuc;
Between Material and Culture by Ephraim Joris;
Controlling the City by Michiel van Iersel, Juha van ‘t Zelfde, and Ben Cerveny;
Layered Reality by Gijs Hoofs and Michiel Daalmans;
Urban Field Manuals by Brian Davis, Rob Holmes, and Brett Milligan;
This Is Not an Empty Plot by Patrizia Di Monte;
The Good, the Bad and the Ugly – Excerpts from MONU’s Most Valuable Urbanism Debate

More info about this issue HERE
Browse the entire issue #14 on YouTube
Order here or write an email to publishers@b-o-a-r-d.nl

Editorial by Bernd Upmeyer, Editor-in-Chief, April 2011:
Despite the current urgency to deal with the enormous potential of the already existing urban material as Urban Editors, there seems still to be an enormous lack of interest in topics such as urban and architectural restoration, preservation, renovation, redevelopment, renewal or adaptive reuse of old structures among architects and urban designers. But ignorance in this matter can only be dismissed as socially irresponsible and economically and culturally unacceptable. But what might be the reason for the prevailing ignorance? Who is to blame? Why is Urban Editing considered to be so utterly unattractive? Felix Madrazo, one of the members of the UNION3 collective, blames the media and in particular architecture publications, as he points out in UNION3’s discussion of urban renewal entitled “The Naked Lunch: A Stark Honest Discussion on Renewal”. He states that a prestigious architectural magazine such as the Spanish El Croquis would never publish an architect who has been practicing renewal for the last twenty years. In OMA’s contribution “Extreme Demolition and Extreme Preservation” Rem Koolhaas holds the arrogance of the modernists responsible for making the preservationist of today look like a futile and irrelevant figure. He furthermore claims that preservation necessitates the development of a theory of its opposite: not what to keep, but what to give up, what to erase and what to abandon – and proposes a system of phased demolition. To a certain extent this is what Lucas Dean recommends in his piece “Apoptotic Woomera 2035” for a small town in South Australia, in which he suggests a programmed urban death that ensures that the urban fabric can constantly undergo a process of rejuvenation. The concept is an analogy to the biochemical process of apoptosis, which is organized cell death that our bodies undergo on a daily basis, killing fifty to seventy million cells, enabling the body to rejuvenate and ensure longevity. Obviously terms such as death and rejuvenation are crucial notions when it comes to Editing Urbanism. In his article “Eternal Ise” Jarrik Ouburg sees destruction as a natural part of preservation. He advises to look east and learn from the way how in Japan important shrines have been rebuild every twenty years for more than ten centuries. But accepting death and decay in buildings is one thing, when it comes to our own death, things get much more complicated. For that reason Adolfo Natalini, one of the founders of the legendary 60ies architecture firm Superstudio, does not like physical changes in cities, because they remind us that we are moving closer and closer towards death, as he explains in an interview with us entitled “Deadly Serious”. He likes to be surrounded by things that remain the same as they give us the impression of eternity and he sees architecture as the most powerful medium of this form of hope. To solve the paradoxical situation that cities should on the one hand remain the same, keeping and maintaining all their existing buildings, yet on the other able to change, Beatriz Ramo / STAR suggests in “In the Name of the Past: Countering the Preservation Crusades” to establish Virtual World Heritage Sites as a new category for UNESCO. Virtual preservation enables cities to survive for eternity in the virtual, yet remain living and changing organisms in the real world. Released from the fear of death, Editing Urbanism can become a vital, active and experimental practice, in which the concept of sample and the remix gain importance as a cultural technique as Jan Bovelet and Miodrag Kuc describe in their contribution “The Digital Habitat and Urban Design as Emerging Practice”. Just as remixes of songs are alternative versions of recorded songs, made from original versions, remixes of cities can be alternative versions of the original cities. Especially with the help of hand-held devices, mobile and digital online applications, citizens will be able to alternate and control cities as Michiel van Iersel, Juha van’t Zelfde, and Ben Cerveny explain in their article “Controlling the City”. To edit cities successfully, Brian Davis, Rob Holmes, and Brett Milligan even propose to develop “Urban Field Manuals”, which show how to change or maintain your city just as automotive maintenance manuals teach you how to repair or maintain your car. Such Urban Field Manuals allow you for example to learn how, as a non-profit landlord, to approach buildings that are awaiting demolition permissions for a new construction on old properties, and to format micro-contracts that make unoccupied buildings available to other non-profits at the costs of utilities alone. But one of the most successful strategies for such reuse of unoccupied spaces in cities has probably been developed by Patrizia Di Monte recently. In her contribution “This Is Not an Empty Plot”, she shows how she created an employment plan, in which sixty one long-term unemployed workers cleaned initially empty plots of the historic district of Zaragoza, which led eventually to the realization of twenty-eight projects on those lots over the last two years.