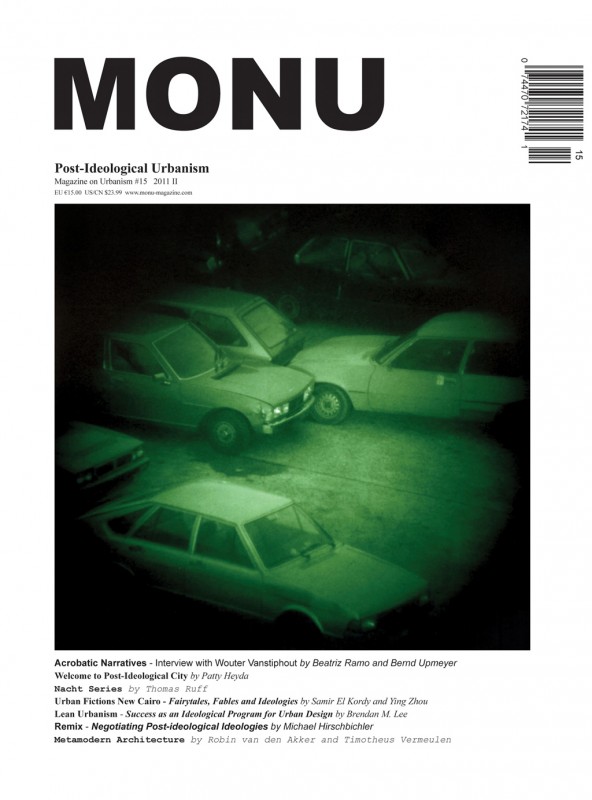 This new MONU issue on the topic of Post-Ideological Urbanism probably touches on one of the most fascinating and biggest issues of our time and in our culture, or what is left of it: the non-ideological – or better post-ideological – conditions of our society when it comes to cities.
Today, ideology appears to have become, and to have been reduced to, something merely aesthetic, something you can buy yourself into as Wouter Vanstiphout explains in an interview with us entitled “Acrobatic Narratives”. In that sense cities have become suspicious territories where hypocrisy and fakery prevail when it comes to urban ideologies and one wishes to have some kind of optical device that detects all the lies, similar to a kind of night vision infrared technology that Thomas Ruff used in his “Nacht Series” applying the same technology that was used during the Gulf War. But the usage of alibi ideologies does not seem to be just a contemporary phenomenon and the inference that, for example, the heroic Modernist architects and urban designers were able to work without succumbing to the moral ambiguities of dealing with external political or economic contingencies is probably a fallacy as Brendan M. Lee states in his contribution “Lean Urbanism”. He furthermore explains that we, architects and urban designers, are sometimes envious of our Modernist forebears for their supposed ability to remain true believers in the revolutionary ideologies they proselytized, but that perhaps we have lost the self-confidence in our own ability to bluff. Fredrik Torisson even questions the necessity to follow one coherent system of ideas or an ethical set of ideals in his piece “The Khmer Rouge and the Control of Urban Space” and disqualifies urban ideology as a homogenizer that elevates one preferred ideal over the many. But according to Michael Hirschbichler and his analytical manifesto “Remix – Negotiating Post-ideological Ideologies” there cannot in fact be a post-ideological condition as there is no society imaginable that could exist beyond an ideological framework and is totally free from ideological contexts. What appears to be post-ideological today is in fact the coexistence, silent combat and mutual neglect of innumerable ideologies, neo-ideologies and pseudo-ideologies. In this pluralistic environment, no single ideology or group of ideologies is perceived to be relevant enough to become a point of reference or a single desirable truth. Robin van den Akker and Timotheus Vermeulen describe this prevailing pluralism, or coexistence, in their article “Metamodern Architecture” as metamodern, a condition in which the contemporary structure of feeling evokes a continuous oscillation between seemingly modern strategies and ostensibly postmodern tactics as well as a series of practices ultimately beyond these worn out categories. Following the authors, that kind of metamodernism can be observed in the art works of for example Djurberg, the quirky cinema of Gondry the novels of Murakami or the music of Coco Rosie and movements as diverse as reconstructivism, the new romanticism and the new sincerity. And a new sincerity is obviously needed in a world consisting of a multiplicity of choices and urban outcomes without a single consistent urban ideology as Melissa Dittmer, Jamie Witherspoon, and Noah Resnick point out in their piece “Choose Your Own Urbanism Presents: The Case of the Missing Ideal”. (-Editorial by Bernd Upmeyer, Editor-in-Chief, November 2011).

More info about this issue HERE
Browse the entire issue #15 on You Tube
Order here or write an email to publishers@b-o-a-r-d.nl