MONU nr16 NON-Urbanism has been Released 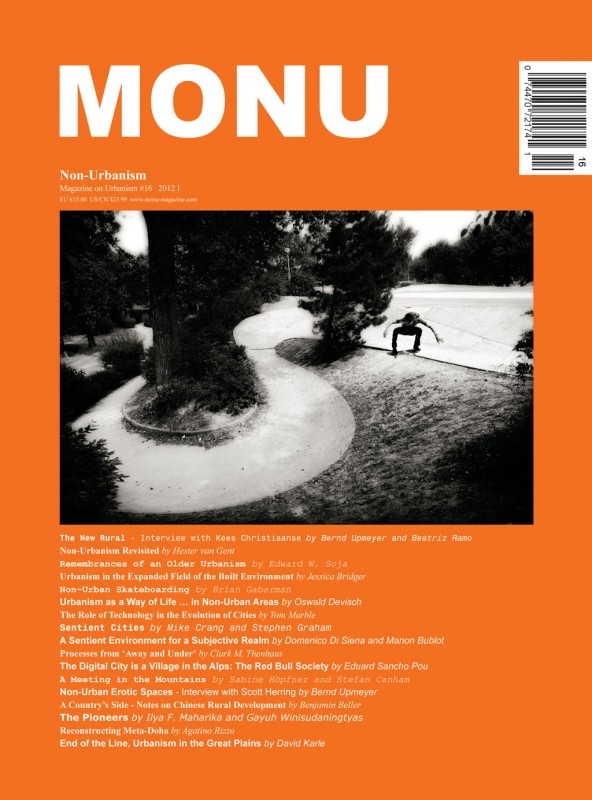 Back in November 2011 the the call for submissions for MONU  #16 was published. This issue has now been released and consists of a fantastic selection of relevant contributions from diverse authors: Kees Christiaanse, Edward Soja, Mike Crang, Stephen Graham and many others (see list below).

The rural as a strict counterpart to the urban appears to be a condition of the past. At least, this is what Kees Christiaanse posits in an interview with us entitled “The New Rural: Global Agriculture, Desakotas, and Freak Farms”. He points out that, today, non-urban spaces interact so frequently and intensely with urbanity that you can no longer describe something as strictly rural. Therefore, we can no longer separate the city from the countryside as these are not polarized entities and each other’s enemies, but rather the result of each other. Evidently, to be an urbanist today means that one must also be a regionalist as Edward W. Soja puts it in his contribution “Remembrances of an Older Urbanism”. In relation to that, Oswald Devisch reminds us in his piece “Urbanism as a Way of Life…in Non-Urban Areas” that the 1930s sociologist Louis Wirth stressed that the concept of urbanism is something not only confined to large, dense and heterogeneous settlements, but can also manifest itself to varying degrees “wherever the influences of the city reach”. In that sense Devisch thinks that it is time to change the urban – non-urban dichotomy into a dynamic – stagnant version that is based on social rather than spatial conditions. Obviously, new media and especially the internet play an important role in the discussion on Non-Urbanism as spaces around us are now being continually forged and reforged in informational processes as Mike Crang and Stephen Graham explain in their contribution entitled “Sentient Cities: Ambient Intelligence and the Politics of Urban Space”. In their article they describe a world, in which we not only think of cities, but cities also think of us, and in which the environment reflexively monitors our behavior. In his piece “Processes from ‘Away and Under'”, Clark M. Thenhaus envisions – because of those informational processes and in particular increased digitalization – no future widening of the gap between the urban and the non-urban, but rather that gap being bridged. This ‘bridging’ will occur only partially through physical manifestations, but largely through otherwise ‘invisible’ structures and open-source processes and networks. Although the limits of digital cities are usually not physical, but, for example, economic as Eduard Sancho Pou describes in his contribution “The Digital City is a Village in the Alps: The Red Bull Society”, one might find – especially in non-urban areas – “Truman Show”-like physical manifestations such as the village of the multinational corporation “Red Bull”. But non-urban spaces are also changing independently from the influence of the internet and social media, particularly in emerging market economies such as China, India or Indonesia. According to Scott Herring rural conditions have actually been changing ever since there this idea of a country and a city emerged, as he explains in another interview with us entitled “Non-Urban Erotic Spaces”. In Indonesia, for example, so-called desakotas, hybrid spaces between the countryside and the city, appear as transitory spaces that lead eventually to the rise of the city of the non-urban as Ilya Fadjar Maharika and Gayuh Winisudaningtyas put it in their article “The Pioneers: Mutation Agent of the Non-Urban”. In such a ‘non-urban city’ so-called pioneers convert agriculture into urbanized spaces with a population density double that of the countryside, into a non-urban urbanism. However, the future viability of those non-urban urban spaces remains in doubt as a typical transformation process of rural spaces – especially in Asia – means that the rural self-supporting local ecology of farming gradually vanishes as a lot of farmers go bankrupt and feudal proprietors or large multinational agro-companies take over the land as described by Kees Christianse. In order to survive, formerly independent rural communities, such as the ones in the US that David Karle mentions in his contribution “End of the Line, Urbanism in the Great Plains”, must transition to self-sustaining micro-regional networks.

Contents:
-The New Rural: Global Agriculture, Desakotas and Freak Farms – Interview with Kees Christiaanse by Bernd Upmeyer and Beatriz Ramo
-Non-Urbanism Revisited by Hester van Gent
-Remembrances of an Older Urbanism by Edward W. Soja
-Urbanism in the Expanded Field of the Built Environment by Jessica Bridger
-Non-Urban Skateboarding by Brian Gaberman
-Urbanism as a Way of Life … in Non-Urban Areas by Oswald Devisch
-The Role of Technology in the Evolution of Cities by Tom Marble
-Sentient Cities: Ambient Intelligence and the Politics of Urban Space by Mike Crang and Stephen Graham
-A Sentient Environment for a Subjective Realm by Domenico Di Siena and Manon Bublot
-Processes from ‘Away and Under’ by Clark M. Thenhaus
-The Digital City is a Village in the Alps: The Red Bull Society by Eduard Sancho Pou
-A Meeting in the Mountains by Sabine Höpfner and Stefan Canham
-Non-Urban Erotic Spaces – Interview with Scott Herring by Bernd Upmeyer
-A Country’s Side – Notes on Chinese Rural Development by Benjamin Beller
-The Pioneers: Mutation Agent of the Non-Urban by Ilya F. Maharika and Gayuh Winisudaningtyas; Reconstructing Meta-Doha by Agatino Rizzo
-End of the Line, Urbanism in the Great Plains by David Karle

↑ image above: by Brian Gaberman

More info about this issue HERE
Browse the entire issue #16 on Vimeo
Order here or write an email to publishers@b-o-a-r-d.nl