MONU 20: Geographical Urbanism has been Released 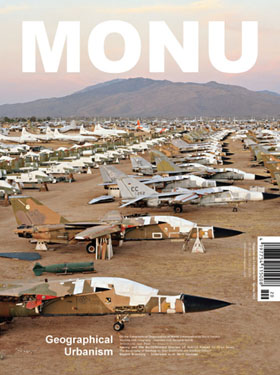 Contrary to the simplified linear causality of the environmentalism of the past, which posited that natural geography shapes urban patterns, it is now thought that contemporary urbanization shapes the surface of the earth.
Nikos Katsikis explains this tremendous current shift in the meaning of physical geography for cities in his contribution “On the Geographical Organization of World Urbanization”, putting the discussion of the 20th issue of MONU on the topic “Geographical Urbanism” in a historical context. For Bernardo Secchi this is not much of a problem as he is no fan of natural geography anyway, a position he reveals in our interview with him entitled “Working with Geography”. According to him our task today is to understand, and to learn from, natural geography, but to correct and improve it and design useful projects of artificial geography. What is important to him – and which is the reason why he considers physical geography the starting point of all his ideas on planning – is that over time people transform geography, and especially topography, into topology, something that concerns social, economic, spatial, and phenomenological interactions. To what extremes natural geographies can be manufactured is shown by Edward Burtynsky in his series of photographs entitled “Seduction and Fear”. However, the natural geographical features in his images are not only introduced as victims, but also as partners, protagonists, baits, sources, threats, and pleasures. How such manufacturing can result in hybrid places, with bridges and buildings to our left and rivers to our right, where rural forms intermingle with urban forms and geography penetrates the city, is described by Ryan Dewey in his piece “Agency and the Multifaceted Stories of Hybrid Places”. In these hybrid locations cities and geographies converge in a story of identity and imageability, turning“Geographical Urbanism” into a sort of autobiographical tale, in which geography provides us with a kind of physical scaffolding that allows us to use land as a place to store our memories. That way, physical geography becomes more meaningful for cities than something that is merely used for its picturesque qualities or resource value as Sean Burkholder and Bradford Watson state in their article “The Geography of Geology”. Because cities and landscapes are much more complex than that, and can generate – together with the inhabitants – a multiplicity of narratives as Bart Lootsma emphasizes in our interview with him entitled “Beyond Branding”. Although he believes that there are aspects of, for example, the “Generic City” that are absolutely true, yet he does not find them necessarily threatening, he is convinced that no city will ever be the same because of natural geography. He even thinks that it is crucial for architects and urban designers to reconnect with geographers – not just to achieve better and smarter planning and design but, to put it more dramatically, also to save our democracies and develop them further.

Contents:
On the Geographical Organization of World Urbanization by Nikos Katsikis;
A Geographic Stroll Around the Horizon by Rania Ghosn and El Hadi Jazairy;
22º54´S 43º 10’W by Michael Oliveira;
We Dig Your Land by David Morison;
Working with Geography – Interview with Bernardo Secchi by Bernd Upmeyer;
Underneath it All: Geo Urbanism by Jessica Bridger;
Strait by Neyran Turan;
Geography and the Identity of Fear: The Other Battle of Mexico City by Felipe Orensanz;
Post-Human Tectonics – A Geology of Power by Roger Hubeli;
Seduction and Fear by Edward Burtynsky;
Valleys, Rivers, Pathways: Narrating the Urban Landscape by Thomas Kohlwein;
Contested Terrain: In Search of Niagara by Kees Lokman;
Agency and the Multifaceted Stories of Hybrid Places by Ryan Dewey;
The Contour and the Block by Lucas Correa-Sevilla and Pablo Pérez-Ramos;
Urban Fringe Landscapes on Mountains by Maider Uriarte Idiazabal;
The Geography of Geology by Sean Burkholder and Bradford Watson;
Geography, Urbanism’s Critical Cousin by Christopher de Vries;
Urbanism After Geography: The Network is Context by Clare Lyster;
Beyond Branding – Interview with Bart Lootsma by Bernd Upmeyer

More info about this issue HERE
Browse the entire issue #20 on YouTube
Order here or write an email to publishers@b-o-a-r-d.nl