MONU 24: Domestic Urbanism has been Released 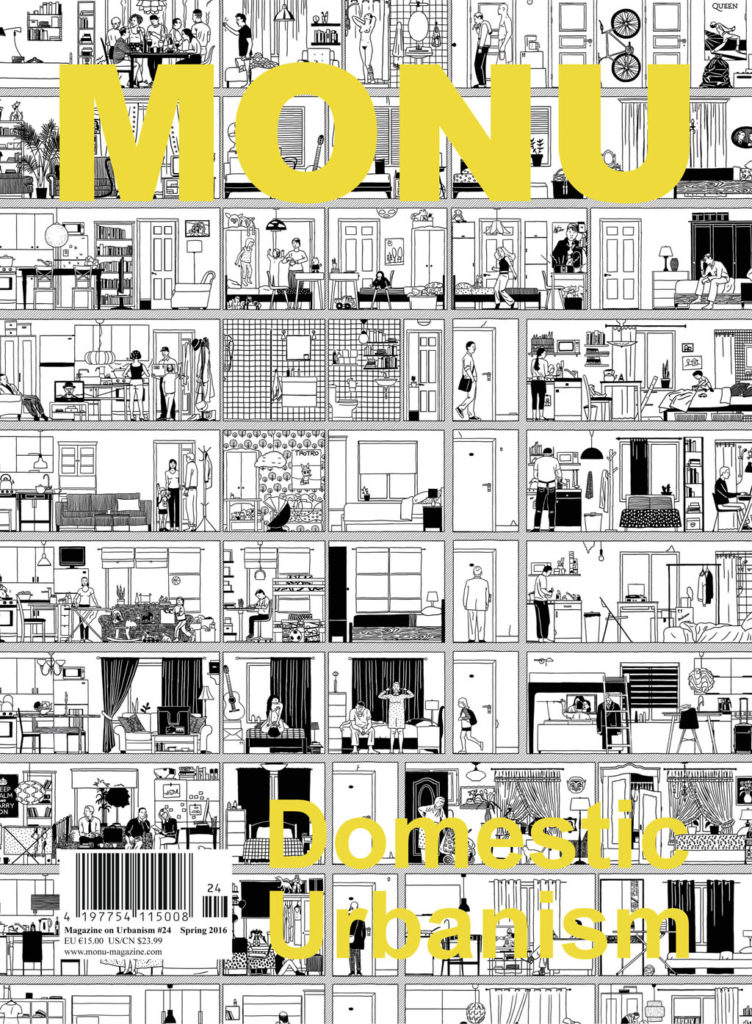 What happens in domestic interiors appears to be very relevant for our societies. At least, that is what Andrés Jaque argues in our interview entitled “The Home as Political Arena” for this new issue of MONU. This issue, “Domestic Urbanism”, deals with the domestic aspects of cities, and everything that is related to the human home and habitat, the scale of the house, people’s own universe, things that are usually hidden and private. According to Jaque, a great number of the processes by which our societies are shaped take place in domestic interiors, the domestic realm, and in relation to very domestic elements such as the table setting, the Christmas tree, or the TV remote control. Justinien Tribillon – in his contribution “The Fridge, the City and the Critique of Everyday Life: a Tale of Domestic Urbanism” – describes, for example, to what extent a domestic element such as the refrigerator has changed radically the way we consume the city. Because the domestic infiltrates the urban and, vice versa, the city leaks into the house, the city needs to be seen as a continuous fabric of differential intensities rather than a patchwork of enclosed categories that distinguish between private and public, house and city, or inside and outside. In her piece “The Minor Composition of Threshold Domesticities” Lucía Jalón Oyarzun explains how our private domestic spaces are becoming increasingly more public as demonstrated by åyr, an art collective that focuses on contemporary forms of domesticity and the effects of the internet on the city. In their contribution “The Pavilion” they feature photos of Airbnb apartments that were used as exhibition spaces during the Venice Biennale of Architecture in 2014. That the internet plays a growing role in “Domestic Urbanism” is illustrated by the Rotterdam-based collective Cookies in their article “A Nice Normal Little Village”, showing how the digital machines of today might articulate our domestic lives tomorrow, based on their research into a care facility for elderly people on the outskirts of Amsterdam. In this facility the domestic environment of the patients is reconstructed retroactively, something which is not so far removed from the simulated domestic environments on military training sites thatErsela Kripa and Stephen Mueller (AGENCY) refer to in their piece “Domestic Insecurities”. Neeraj Bhatia and Christopher Roach in their article “Urbanism From Within”show us how to re-imagine and re-think the domestic and the house as one of the smallest and most valuable urban units in order to create new affordable housing units. One solution would be to make use of the many illegal secondary units that exist within a city, such as hidden garages, attics, rear yards, or underutilized spaces of homes. That the needs of people and the relationship of people should to be placed at the centre of all actions while re-inventing and evolving the concept of the domestic and the home is emphasized by Casco, an office for art, design, and theory in their contribution “A Short Guide through the Grand Domestic Revolution” in which they explore the domestic sphere to imagine new forms of shared living and working. In order to prepare ourselves for a future that is once again in desperate need of a revolution in housing, the design of floor plans, and strategies for typologies, we need to end what STAR strategies + architecture describes as the “festival of facades”. We need to dare remove the cover and observe with fresh and curious eyes what is happening behind and inside buildings and adapt the homes and the domestic spaces of people not merely to regulations, but to the diverse ways of life and especially the changing ways of life of the inhabitants, accentuating that the true revolution should happen indoors, as they point out in their piece “The Interior of the Metropolis”. Similarly, in our interview entitled “Domesticity”, Herman Hertzberger underlines the importance of the idea of a small and basic unit, which provides people the possibility – whether they are rich or poor – to turn their houses into what they want them to be, with a broad variety of options. Furthermore, he stresses that architects should stop being too concerned with aesthetics, but ought to create new paradigms with regard to domestic spaces rather than just thinking about creating nice forms.

Contents:
The Home as Political Arena – Interview with Andrés Jaque by Bernd Upmeyer;
Chantal Akerman, Yasujiro Ozu, and the Poetics of Intimate Space by Sander Hölsgens;
The Fridge, the City and the Critique of Everyday Life by Justinien Tribillon;
How to Domesticate a City: Adaptive Tools to an Urban Environment by CENTRALA (Simone De Iacobis, Malgorzata Kuciewicz), with Aleksandra Kedziorek;
The Minor Composition of Threshold Domesticities by Lucía Jalón Oyarzun;
Redefining the Domestic between New Forms of Dwelling and Emerging Social Problems by Luca Lazzarini; The Pavilion by åyr;
Re-Addressing Commons by Fabrizia Berlingieri;
Housing in Continuity by Aron Bohmann and Charlotte Herbst;
A Nice Normal Little Village by Cookies;
An Amalgamation of Homes: 3 Micro-stories by Nele Aernouts and Sofie Van der Linden;
Domestic Insecurities by Ersela Kripa and Stephen Mueller (AGENCY);
The Circulation of Domesticity in a New Political Economy by Ioanna Piniara;
Urbanism From Within by Neeraj Bhatia and Christopher Roach;
A Short Guide through the Grand Domestic Revolution by Casco;
Socialist Urban Planning and the Housing Question: At Home in Skopje by Jasna Mariotti;
The Interior of the Metropolis by STAR strategies + architecture;
Live, Work, Play: Learning from the Athfield House and Office by Julia Gatley,
Marco Moro and Simone Ferreli;
Domesticity – Interview with Herman Hertzberger by Bernd Upmeyer