MONU 28: Client-Shaped Urbanism has been Released 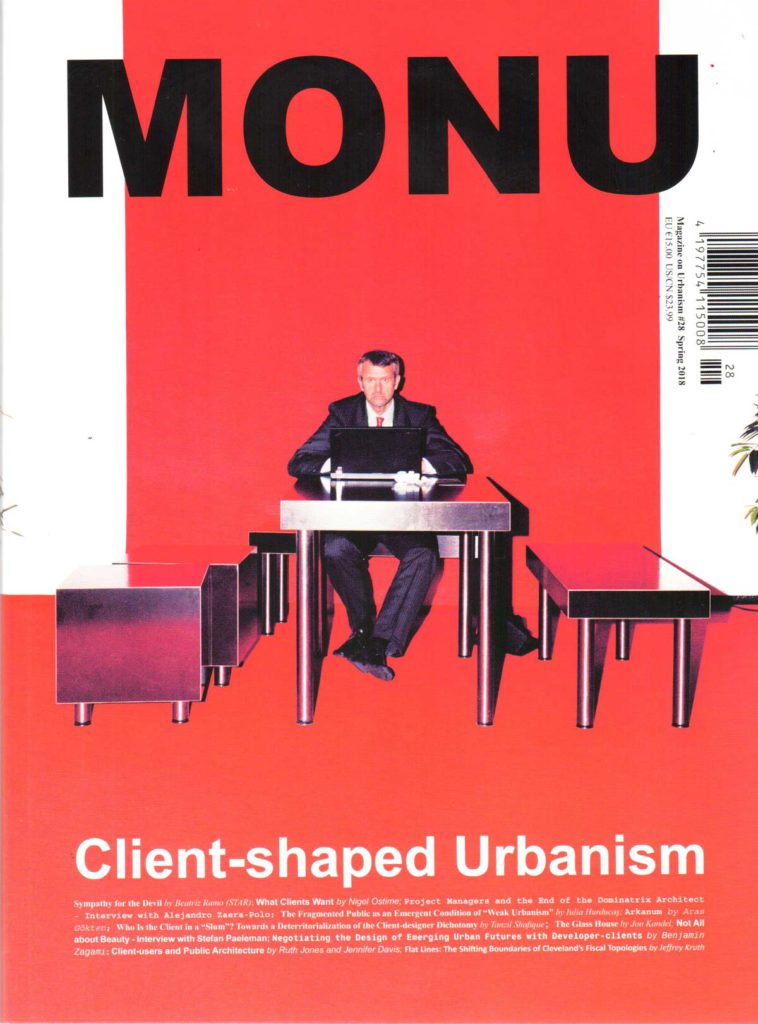 “Are architects at risk of losing their relevance to the client?” asks Beatriz Ramo in her contribution “Sympathy for the Devil” for MONU‘s issue #28 that we devote to the topic of “Client-shaped Urbanism”. We consider “clients” to be crucial participants in the shaping and creating of urban spaces. We intend to find out how to improve things, such as the collaboration between client and architect or urban designer, for a more satisfying outcome for everybody involved and above all for the users and inhabitants of cities. For Alejandro Zaera-Polo architects today have not only lost the trust of clients, but also the trust of society to deliver anything culturally significant, because they have been fooling around with idiotic, self-involved ideas for too long and are now viewed with some level of distrust, as he claims in our interview entitled “Project Managers and the End of the Dominatrix Architect”. But he partly blames the clients too for this situation. On the one hand, clients were called in, especially during the 1990s and before the financial crisis of 2008, to do something weird and shocking that would “put the place on the map”; on the other, they increasingly started to hand projects over to project managers, who often took pride in belittling the architect to show the client that they have everybody under their boot, that they are saving money, or that they are tough with deadlines, which is, according to Zaera-Polo, often to the project’s loss. To what extent the public can be put down too, and even excluded from city creation processes, is demonstrated by Iulia Hurducas in her piece “The Fragmented Public as an Emergent Condition of “Weak Urbanism””, in which she describes how the client of every urbanism project appears as a ghostly presence, referring to processes in the city of Cluj, Romania. Aras Gökten seems to capture such ghostly presences in his photo-essay “Arkanum”. Money is certainly a very important aspect when it comes to “Client-shaped Urbanism” as Tanzil Shafique emphasizes in his article “Who Is the Client in a “Slum”? Towards a Deterritorialization of the Client-designer Dichotomy”, revealing how architects are dependent on clients – and bound to clients – predominantly for financial reasons. Thus, if one were to rewrite “Moneytalks”, the AC/DC smash hit from the 90’s, it would be called “moneybuilds”. However, he points out as well that the role of the client as the patron of ‘great works of art and architecture’ is implicit and ‘an a priori’ in architectural practice, and that urbanism has been shaped by clients for a long time. Nevertheless, that things can get complicated leading easily to a tense dynamic between client and architect is dramatically displayed in Jon Kandel‘s photo series about the play “The Glass House” at the Clurman Theatre in New York City, that portrays the particular problematic relationship between Ludwig Mies van der Rohe and Edith Farnsworth, who became his client, acolyte, lover, collaborator, frustrated client, spurned lover, and bitter enemy all within a few years. To avoid frustration the Belgian real estate developer Stefan Paeleman stresses that it is of the utmost importance that the client and the architect are on the same team, respecting each other, and working in the same direction to achieve a common goal, as he explains in our second interview called “Not All about Beauty”. How architects and urban designers might establish more trust and initiate more constructive partnerships with their clients is an issue discussed by Benjamin Zagami in his contribution “Negotiating the Design of Emerging Urban Futures with Developer-clients”: by embracing a co-creation process, escalating the conventional client-practitioner dynamic by enabling clients to become active participants and co-designers. According to Ruth Jones and Jennifer Davis the future users are ideally the clients of projects as they explain in their piece “Client-users and Public Architecture: A Look at the Approaches of French Architect Patrick Bouchain and the French Architectural Collective Exyzt”, imagining a collaborative engagement of the public in the creation of architecture while making, and funding, architecture conceived as active sites for the collective construction of citizenship. For whom this sounds too utopian Jeffrey Kruth suggests – since the client-architect relationship has shifted from one of patronage to a broader system of data-driven management practices – that architects re-shape their role into one of dexterity that can consistently be placed in a position of agency to help re-shape the environment in societally beneficial ways, as he points out in his text “Flat Lines: The Shifting Boundaries of Cleveland’s Fiscal Topologies”. That could lead to new forms of analysis, representation and experimentation, in practice providing agency for designers and planners, that better shape the space in which architectural practice occurs.

Contents:
Sympathy for the Devil by Beatriz Ramo (STAR);
What Clients Want by Nigel Ostime;
The End of the Dominatrix Architect – Interview with Alejandro Zaera-Polo by Bernd Upmeyer and Beatriz Ramo;
Expectation and Reality by Leewardists;
The Fragmented Public as an Emergent Condition of “Weak Urbanism” by Iulia Hurducas;
Arkanum by Aras Gökten;
The King As Client by Azadeh Zaferani;
Arterial: The Persistence of Flow – After the City, This (Is How We Live) by Tom Marble;
Who Is the Client in a “Slum”? Towards a Deterritorialization of the Client-designer Dichotomy by Tanzil Shafique;
Makerspaces: Public as Client by Nate Bicak;
The Clients They Are a-Changing by Tommaso Raimondi and Paolo Romanò;
Behind the Scenes: A Conversation with my Client by Djamel Aït-Aïssa and Beatriz Ramo (STAR);
The Glass House by Jon Kandel;
Not All about Beauty – Interview with Stefan Paeleman by Bernd Upmeyer;
Negotiating the Design of Emerging Urban Futures with Developer-clients by Benjamin Zagami;
Client-users and Public Architecture by Ruth Jones and Jennifer Davis;
Architecture After the Client by Nicholas Pajerski;
Ariadne’s Thread – Diverging Trajectories of Architect, Client and User by GruppoTorto;
Contested Grounds by Nicole Lambrou;
Flat Lines: The Shifting Boundaries of Cleveland’s Fiscal Topologies by Jeffrey Kruth