MONU nr.17 Next-Urbanism has been Released 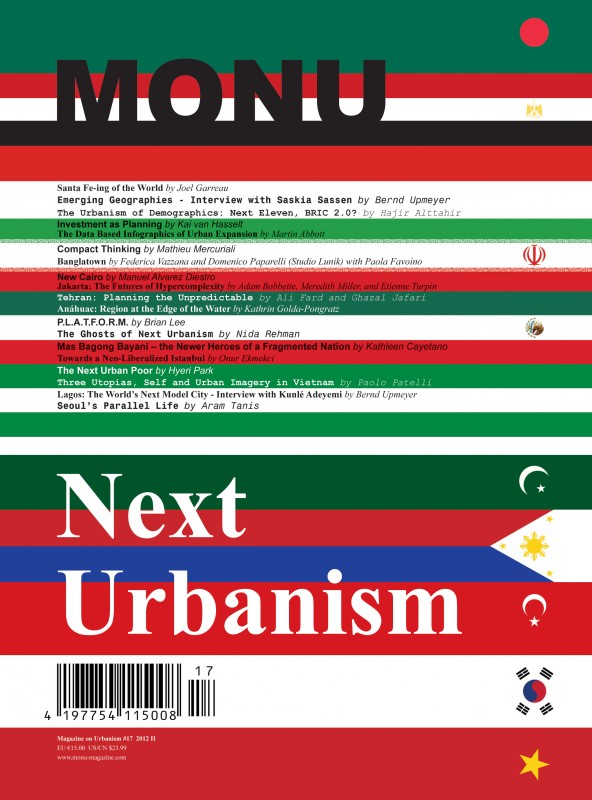 This new issue of MONU is dedicated entirely to the topic of “Next Urbanism” – meaning the urbanism of the cities of the so-called “Next Eleven” or “N-11”, which include eleven countries: Bangladesh, Egypt, Indonesia, Iran, Mexico, Nigeria, Pakistan, the Philippines, Turkey, South Korea, and Vietnam.
These countries have been identified as growing into, along with the BRICs – Brazil, Russia, India, and China – the world’s largest economies in the 21st century. Next to interviews with Saskia Sassen and with the Nigerian-born architect Kunlé Adeyemi, and a series of contributions that discuss Next Urbanism in general, we feature eleven articles that focus specifically on the cities of each of the Next Eleven countries. The issue opens with an article entitled “Santa Fe-ing the World” by Joel Garreau, who envisions the future of the Next Urbanism as being organized in dramatically different settlement patterns that feature widely dispersed new aggregations, made possible by new information technology, particularly the internet and cell phones. Although these are far-fetched futuristic scenarios, being connected appears as the key factor and an important asset that will determine the identity, character and future of the Next Eleven cities. Saskia Sassen describes something similar in our interview with her entitled “Emerging Geographies – From Environment to Terrorism”. Rather than thinking in terms of “Next Eleven”, a category that is -according to her – based on lazy measures and an ignorance of the actual economies and societies and geographies of those countries, she defines Next Urbanism as emerging geographies and networks of cities that connect prosperous areas of countries across the world that are better disposed to face our major global challenges than national governments. Hajir Alttahir, in her contribution “The Urbanism of Demographics: Next Eleven, BRIC 2.0?”, unmasks qualifications such as BRIC or Next Eleven as mere marketing ploys, used by banks and targeted at potential investors. However, from an investor’s point of view, the concept of the Next Eleven group of countries makes perfect sense as Kai van Hasselt points out in his piece “Investment as Planning” in which he tries to discover how cities and its citizens can profit from the concept and how the act of investing can be seen as a process parallel to planning or even as a form of planning itself. How important the need for investments is, for example, in urban infrastructure and in particular in communication infrastructure in the cities of the countries of the Next Eleven, is explained by Federica Vazzana and Domenico Paparelli (Studio Lunik), together with Paola Favoino, in “Banglatown”, which marks the first of the eleven articles focusing specifically on the distinct qualities, identities, geographies, and vulnerabilities of the cities of one of the Next Eleven countries – in this case Bangladesh. To what extent, for example, are the areas of the city of Jakarta, despite being the rising star of Indonesia, subject to unequal exposure to environmental risks, disaster planning, and financial reorganization and management that may eventually eclipse many forms of life that constitute the very ‘cityness’ of Jakarta? This question is addressed by Adam Bobbette, Meredith Miller, and Etienne Turpin in their piece “Jakarta: Design Research and the Futures of Hypercomplexity”. The fact that the cities of the Next Eleven countries do not always function as the engines of economic growth is shown by Nida Rehman in her contribution “The Ghosts of Next Urbanism”, in which she explains how the ghosts of unfinished urban projects in Pakistan’s city Lahore continue to haunt the city. Obviously, there is a need still for a better understanding of the dynamics of the Next Eleven cities to assure their successful future as Onur Ekmekci clarifies in his article “Towards a Neo-Liberalized Istanbul” in which he describes the cities of the Next Eleven, and particularly the city of Istanbul, as “worlding cities”: inherently unstable, inevitably subject to intense competition, always incomplete. In the words of the urban theorist Ananya Roy: ‘the art of being global’. Altogether the eleven articles that focus specifically on the cities of the different Next Eleven countries provide a broad overview of what Next Urbanism looks like today and will look like in the future. And despite their problems, it appears that if each of their economies is able to address the specific conditions needed to maintain growth, as Hajir Alttahir explains, the emerging architecture and urbanism of the Next Eleven, although more muted than BRIC in terms of development, may end up surprising us all with their innovative strength, and will act as a paradigm for a new networked, high-density, and resilient urbanism. According to Kunlé Adeyemi the cities of the Global South are already the cities of the moment: he perceives the Nigerian city of Lagos to be the global model city, as he explains in our interview with him entitled “Lagos: The World’s Next Model City”. (Editorial by Bernd Upmeyer, Editor-in-Chief, October 2012).

Contents:
-Santa Fe-ing of the World by Joel Garreau
-Emerging Geographies: From Environment to Terrorism – Interview with Saskia Sassen by Bernd Upmeyer
-The Urbanism of Demographics: Next Eleven, BRIC 2.0? by Hajir Alttahir
-Investment as Planning by Kai van Hasselt
-The Data Based Infographics of Urban Expansion by Martin Abbott
–Compact Thinking by Mathieu Mercuriali; Banglatown by Federica Vazzana and Domenico Paparelli (Studio Lunik) with Paola Favoino
-New Cairo by Manuel Alvarez Diestro
-Jakarta: Design Research and the Futures of Hypercomplexity by Adam Bobbette, Meredith Miller, and Etienne Turpin
-Tehran: Planning the Unpredictable by Ali Fard and Ghazal Jafari
-Anáhuac: Region at the Edge of the Water by Kathrin Golda-Pongratz
-P.L.A.T.F.O.R.M. by Brian Lee
-The Ghosts of Next Urbanism by Nida Rehman
-Mas Bagong Bayani – the Newer Heroes of a Fragmented Nation by Kathleen Cayetano
-Towards a Neo-Liberalized Istanbul by Onur Ekmekci
-The Next Urban Poor by Hyeri Park
-Three Utopias, Self and Urban Imagery in Vietnam by Paolo Patelli
-Lagos: World’s Next Model City – Interview with Kunlé Adeyemi by Bernd Upmeyer
-Seoul’s Parallel Life by Aram Tanis

More info about this issue HERE
Browse the entire issue #17 on YouTube
Order here or write an email to publishers@b-o-a-r-d.nl