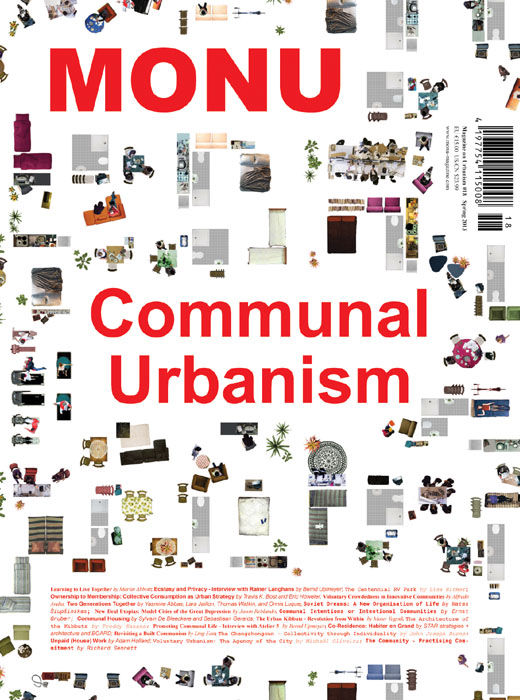 How should we live together? is the central question of this 18th issue of MONU on the topic of “Communal Urbanism”, focusing on contemporary communal living in cities.
According to Martin Abbott’s contribution “Learning to Live Together”, this is a question often discussed among the housemates ofBerlin’s 40 year old communal “Hausprojekt Walde”. Rainer Langhans, one of the early members of the legendary “Kommune 1”, founded inBerlin in 1967, is convinced that in the future we will live increasingly communally. He sees a growing demand for, and interest in, communal life and shared experiences as he explains in our interview with him entitled “Privacy and Ecstasy”. But in contrast to his own experiences in Kommune 1, where he experienced an uninterrupted, 24/7, spiritual communal ecstasy of love, the communal life of the future will instead be characterized by temporary communities, where people meet and share spaces, facilities and experiences occasionally, similar to his own current communal life. That way cooperation does not come at the expense of our individualism and is focused on membership rather than ownership as Travis K. Bost and Eric Höweler clarify in their piece “Ownership to Membership: Collective Consumption as Urban Strategy”. Yasmine Abbas, Lara Jaillon, Thomas Watkin, and Onnis Luque explain in their article “Two Generations Together” how communal life might be an answer to present urban challenges that appeared due to increasing social fragmentation, weak or fragile economies and the burst of the housing bubble that pushed many countries to the edge of acceptable standards of living. History has shown that communal and cooperative life can lead to numerous benefits for everybody involved. For example,America met the challenges of the Great Depression in the 1930s in the spirit of cooperation as Jason Reblando illustrates in his contribution “New Deal Utopias: Model Cities of the Great Depression”. However, communal urban life today has to provide a flexible platform for collaborative possibilities and should no longer aim to provide a self-sufficient framework, but a lifestyle that is stripped of the “forced socialization” of the shared forms of life of the past as Maier Yagod describes in his piece “The Urban Kibbutz – Revolution from Within”. Such a platform, that could be taken up and inhabited by people as an extension of and complement to their own houses, is what the Swiss architecture collective Atelier 5 had in mind when it designed and built its famous “Siedlung Halen” in the late 1950s and early 1960s, as Heinz Müller, one of the current partners of Atelier 5, puts it in our interview with him entitled “Promoting Communal Life”. STAR strategies + architecture and BOARD, in their contribution “Co-Residence: Habiter en Grand”, argue that the introduction of a new form of communal life on the domestic scale of the apartment can contribute considerably to solving the current problems on the metropolitan scale, whether of an economical, social, or environmental nature. But the success of such a communal urbanism; and communal housing in particular, relies on a high level of goodwill and participation from all people and residents involved, as Adam Holland states in his article “Unpaid (House) Work”. Only then might the communal experience of cooperation become a sustainable pleasure as Richard Sennett explains in his piece “The Community – Practicing Commitment”.