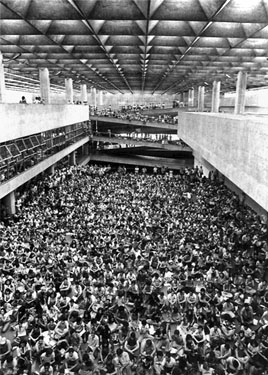 When a few years ago we at MONU made the huge mistake of travelling in August to Tokyo, the warmest month of the year in this part of the humid subtropical climate-zone, we were constantly forced to find shelter in the public air-conditioned interiors of the city.
But what we experienced there had, due to the dimensions and quality of the spaces, very little to do with the interconnected public interior spaces of bad repute of the past, and neither was their quality entirely based on the incredibly sophisticated public toilets featuring amenities such as bidet washing, seat warming, and deodorization; nor had it to do solely with the functional additions of experiences such as theatres, libraries, and other attractions. Rather, their value was based on a multiplicity and complexity of features, spaces, and aspects that interacted, creating public spaces of a quality that can usually only be found outdoors or in connection with the outdoors. That is why these public interior spaces should no longer be identified as mere interiors, but as somewhat advanced versions of interiors and as something on an urban scale and of an urban complexity that thus would be better described as interior urbanism. Therefore, this new issue of MONU aims to investigate interiors, and especially public interior spaces, on an urban scale and their meaning for cities as social, political, economical, ecological, open and accessible spaces, whether publicly or privately owned.

We feel it necessary to theorize and re-think interiors as something deeply urban, as public spheres, and in relation to urban design, social studies, and cultural studies. Spaces to be analyzed in this issue range from small interior alleys to libraries, museums, markets, religious spaces, to large train stations and vast sport facilities to name but a few. One of the major and obvious advantages of those public interior spaces is their climate-controlling ability. We should not underestimate the role of the climate when it comes to cities, as Bart Lootsma explained in an interview with us entitled “Beyond Branding” that was published in our last issue, MONU #20, on the topic of “Geographical Urbanism”. It is the climate-controlling capacity of interior public spaces that makes it possible to create vibrant public spaces in cities all around the globe, even where the geographical context does not necessarily favour outdoor activities, whether due to cold, hot, or humid weather conditions. That makes interior urbanism a highly global topic that will become ever more important if the predicted climate changes will come true in the future. Therefore, interior urbanism can be analyzed and found all over the world in cities that are as different as, for example, Reykjavík, located in a sub-polar oceanic climate, and Phoenix, located in a subtropical desert climate, or Bangkok with its tropical wet and dry climate.

But in this new issue of MONU we also wish to explore to what extent contemporary public interior spaces are developing differently in one city compared to another city and how the spaces of today can be distinguished from the interior spaces of the past, how they have changed and matured, and how they might develop in the future, all over the planet, making public urban life possible in places that are climatically challenged. Thus, this new issue of MONU intends to look at public interiors with a fresh eye and at interior urbanism as a professional field that demands new experts: interior urbanists, who are neither interior architects, nor architects or urban designers, but something more of a hybrid.

To discover and to discuss what “Interior Urbanism” could be in general, this call for submissions for MONU #21 invites critical essays, innovative research, mind-opening projects, remarkable photography, original infographics, and ground-breaking strategies. Abstracts of around 500 words, and images and illustrations in low resolution, should be sent together with a short biography and a publication list as one single pdf-file that is not bigger than 1mb to info@monu-magazine.com before June 30, 2014. MONU’s autumn issue #21 will be published in October 2014.

↑↑ Image above: Interior of João Batista Vilanova Artigas’
School of Architecture and Urbanism at
the University of São Paulo, 1969.