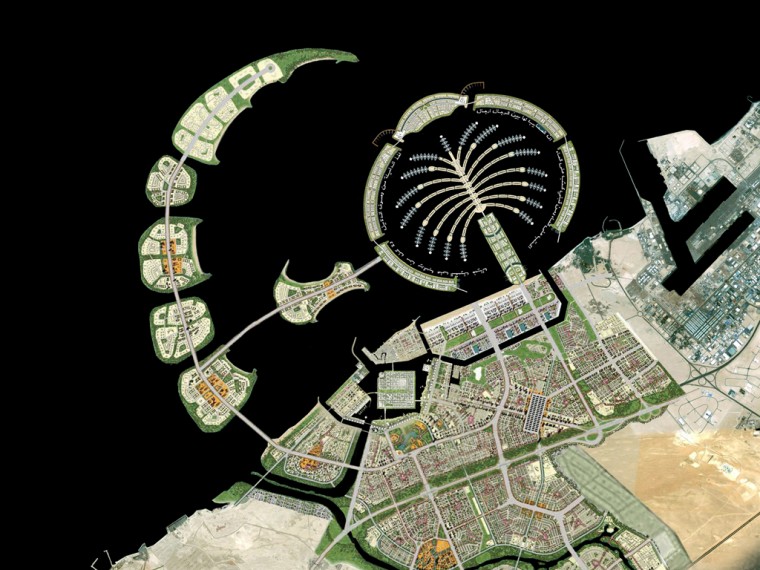 Beatriz Ramo and Bernd Upmeyer spoke with Reinier de Graaf, who is one of the partners of Rotterdam-based OMA (Office for Metropolitan Architecture). He joined OMA in 1996 and in 2002 became the director for AMO, the think tank of OMA.
In that capacity he was responsible for the production of ‘The Image of Europe’, an exhibition that provides a history of European political representation.
Recently, he has taken responsibility for OMA’s growing engagement in the Middle East and leads several master plan projects in Dubai, including Waterfront City, Kuwait, and Ras-Al-Khaimah, and buildings in Dubai and Saudi Arabia. The interview deals in general with the question what it means for a European planner – being used to a democratic context – to design in the Gulf States ruled by absolute monarchies. Furthermore, it discusses what kind of urban conditions are being produced there and what impact those planning processes have on the Western world. More specifically, the interview deals with OMA’s Waterfront City project in Dubai.
The interview took place on July 16, 2008 in OMA’s office in Rotterdam.

Beatriz Ramo:  At OMA you are currently busy with many projects in the Gulf Region. What is it like for a European planner, used to a democratic context, to design in states that are ruled by absolute monarchies?

Reinier de Graaf: There is a lot to say about the whole political dimension of where we are working at the moment. An engagement in a place that is not democratic is often equated with endorsement of non-democracies, or at best, it is equated with political indifference and opportunism. But actually, the choice of places where we work is quite deliberate, and as such very much the opposite of opportunism. As an architect you generally go where they build a lot, but at a certain moment we simply decided to explore the Eurasian continent and explore it to the fullest. A continent that geographically consists of about 20 percent democracies and about 35 percent dictatorships, but for the vast majority – the remaining 45 percent – it actually consists of what we have called: “pseudo-democracies”:  places where they have elections, but where you know in advance who is going to win. It is a very slippery and dangerous phenomenon. At this moment the Pseudo-democracy seems to be the most prevailing political system on the Eurasian continent. In many ways it entails the end of black and white thinking about politics in general. Pseudo-democracies have a two-way effect: on the one hand they function as the easy option for dictatorships when faced with pressures for democratic reform, (since for dictatorships it is always easier to transform itself into a pseudo-democracy than into a democracy). So to some extent it inspires good behavior in dictatorships. But on the other hand, it also constitutes a kind of very gentle and subtle erosion of previously well established democracies. So both dictatorships and democracies are weirdly sliding into the same diffuse state… If things were once black and white – good and bad, they are  increasingly drifting towards a kind of grey state in which even supposedly respectable democracies can give rise to somebody like Berlusconi.

Beatriz Ramo: So could we say that Italy is a pseudo-democracy?

Reinier de Graaf: Clearly some of Berlusconi’s ongoing control of the Italian media while being in government has raised questions also inside EU nations about the robustness of the democratic political system. It is something we are acutely aware of. The question then is: what do you do? I must admit I always get a little annoyed that architects, simply because they are professionally active in other forms of political regimes, are the first whose integrity is called into question. (…)

Bernd Upmeyer: What kind of urbanism are the Western planners creating in Dubai?

Reinier de Graaf: Most of the Western planners that are active in Dubai just generally tend to bring the worst examples of Western planning. And it is not the fact that those countries actually claim Disney, it is in fact that Disney – even though we criticise it – is still, on a day to day basis, as we speak, being exported from here to Dubai. The vast majority of planning consultants are actually Western. It is Anglo; in fact South African, Australian, American, English… It is that whole part of the world – they are actually creating Dubai. It is a weird irony. (…)

Beatriz Ramo: As far as I know, the first project OMA was doing in the Gulf region was the New International Airport for Jeddah in Saudi Arabia in 2005. How did that happen?

Reinier de Graaf: That was a pitch where we just took the window of opportunity that we were given. We designed six airport-models for them in six weeks in the hope that one would succeed. It would have been a very nice commission, but eventually the client decided the airport would not be built altogether. But that was our first entry. Also at that moment we were in a competition for the Renaissance Building for Dubai Properties in Dubai Business Bay, which we didn’t win, but we spent quite some time there and started accumulating projects quite rapidly. Today those projects create more than 30 percent of our company’s turnover. (..)

Beatriz Ramo: Do you think that after working in the Middle East you have changed the processes of doing projects? Would a project or study in Europe now be treated in a different way than before?

Reinier de Graaf: I think that there has been a profound effect on us. It is not that we would now necessarily import Arabic solutions in the European context, but the whole speed of development in the Middle East has actually had an impact on the way we work. We used to spend an enormous amount of time on one project, producing a zillion options for every single commission only to endlessly agonize which one to choose. But then, in the Middle East, we all of a sudden had as many commissions as we were able to produce options. (..)

Beatriz Ramo: Did it also change the way in which the office is organized in practice?

Reinier de Graaf: We became very efficient and very quick in generating ideas. Because in the Middle-East you can have a situation like – “yeah, we might have a commission for you”, and then you get another call “yeah, so do you have time tomorrow? Could you be here?” And you need something to show there…just on time. (..)

Beatriz Ramo: I found some similarities between the Waterfront City and the OMA master plan for Almere. Almere is also a kind of a tabula rasa development that is quite unique for a continent like Europe. Both projects also share the ambition of a 24-hour activity place. Do you think such a comparison would be too forced?

Reinier de Graaf: Well, to be honest I actually have never thought about that. The Waterfront project is actually part of a much larger urban plan. I mean that square is part of a huge new development that is for one and a half million new people. And the current population of Dubai stands at 1.2 million. So that means that their new town is actually bigger than their old town, which is a huge quantum leap. Many satellite towns have failed simply because as an experiment they were too small and because the existing larger city was too near and too big and it always provided an escape, so if you didn’t like the new you could always go back to the old. If the new – as the only option for a significant number of people – acquires critical mass then one does not have the choice to go back and this will make it work. I think weirdly enough Almere, in the Netherlands, probably precisely because of that reason, is the only new town which has succeeded. It is the only new town which is still rapidly growing and the only new town which on the whole is still popular with people. I haven’t thought about it before, but I think it is an interesting comparison.

Beatriz Ramo: I think so, too. It will be really interesting to see it in 20 years.

Reinier de Graaf: In 20 years, I predict that Dubai will be a very normal, established city somewhere comfortably in the top ten of globally relevant cities. And I predict that only about 20 percent of that top ten will be Western.

Bernd Upmeyer: Without any changes in their political systems?

Reinier de Graaf: Even without changing the political system. There will still be concentrated power. I predict that power will still reside with the same 15 percent of the population but that the non-native population will have more rights than today. There will be institutions. It will not be fully democratic but it will be more democratic than it is now. And as a city, it will comfortably sit next to Singapore, Tokyo, and Mumbai. It will have some theme parks and some extravagant developments, but also increasingly normal suburban housing developments, etc.

In the end, simply going somewhere and working somewhere also always leads to a demystification of the phenomenon. In that sense, Dubai is to me not that kind of extravagant monster as everybody describes it, simply because you have contact with it on a regular basis. You even witness procedures which are strikingly similar to procedures that you have seen here in terms of planning and things like that.

Beatriz Ramo: Which one of the other Emirates will be the next Dubai?

Reinier de Graaf: I think Abu Dhabi. They are watching their neighbor very carefully. They will try to copy its successes, but also learn from its failures. Clearly Saudi Arabia is a huge sleeping giant, but so is Iran. Places like Saudi Arabia or Iran have already phenomenal business interests in the Emirates.