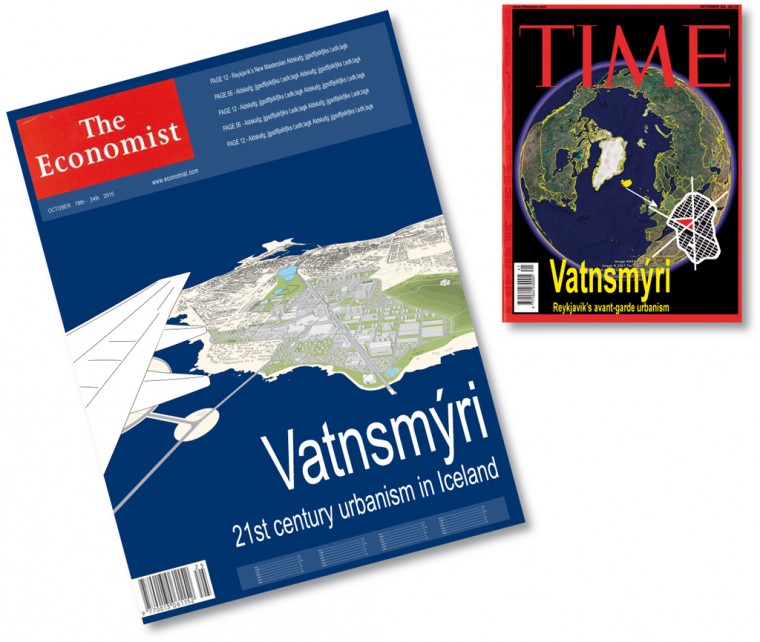 Reykjavik has the exclusive opportunity to reinvent its city centre. It could not only rejuvenate itself but also give a preview of how a European City of the 21st Century could function. The relocation of its city airport unveils an incredible potential: a large amount of area is freed up right in the heart of the city.
These days, it does not happen often in Europe that an area close to a city centre is being developed and that one gets the chance to plan a completely new activity centre for a city. Normally, this opportunity only arises in the periphery and its big-box development: the shopping mall. There, planners try to recreate the atmosphere and structure of inner cities. Shopping malls ultimately took over and claimed all former central functions for themselves, far away, and sealed off from the centre, however much trying to imitate the inner city.

Reykjavik could herald a reverse trend. The availability of space and the good connections to the area will make it suitable to implement and materialize what could herald the beginning of a new approach to urbanism: bringing pieces of the periphery back to the centre: Multiplex cinemas, Shopping mall developments, Ikea… and so on, will be sharing space right in the centre of Vatnsmýri. To make this possible two things are needed: the adaptation of the architecture of these “boxes” to their new location and the planning of good infrastructural connections and plenty of parking space.
As the garden city was a reaction to industrialization, so the Vatnsmýri development will be a reaction to the diasporas of city-life. Today, one of the most powerful generators of urban life is shopping. Nevertheless, shopping has never been recognized as a relevant element for urban planners.

This new city centre, where urban activity is ensured, will be complemented with other city functions: the university, the hospital, the sports, recreation (the beach), and the airport, currently all existing at the edges of the site, and will be linked by the Vatnsmýri ring.
While all of these functions are usually peripherally situated in a city, in Reykjavik they exist right in the centre. By adding to this efficient assemblage of services the content of the big-box-development as the contemporary containers of city life, a successful development of the entire city may result.
Vatnsmýri can house everything the city centre could not endure and thus the new part of Reykjavik will be not combative, but complementary to the existing inner city. The result would be an “ideal” city where everything is within reach.

The Centre of Vatnsmýri:
The centre is given by the cross formed by the three runways of the airport. This generates a magnificent urban plateau that hosts the main shops, offices, cinemas, thermal baths, a university, the transportation hub, and a plaza with heated zones in winter. It possesses a large -1 level with 4500 parking lots, loading areas, entrances to shops and offices, and semi-sunken plazas. This underground world will provide shelter to city life in wintertime. To ensure a strong connection between these two levels the public spaces run from one to the other. This plateau is an essential element to allow for the long awaited reunion of suburban functions with urban functions.

Boulevards:
The size and direction of the existing airport runways fit perfectly in the development of the Vatnsmýri area. By keeping them we maintain a trace of an essential period in Reykjavik’s history, which will be inscribed in the structure of the city. They provide perfect shortcuts between the elements of the ring of services. They will be the main axes acting as: a wide Reykjavik Boulevard connecting the new with the old city centre, connecting the North with the South, and most of the main institutions; a fast expressway Vatnsmýri Road providing direct connections to the airport and disappearing underground when it crosses the centre; and a big Öskjuhlíð Avenue that connects the sea with the hill. The three axes cross on the Plateau at the ground floor and at -1 level, reduce traffic, and provide access to the parking lot and the underground world.

Ring of services:
Essential city functions (university, hospital, sporting areas, leisure, hotel) were forcibly placed around the airport creating an unconscious ring of city services with an empty core. By relocating the airport we obtain an ideal site for a new centre. This ring of services, combined with the new shops and office spaces in Vatnsmýri centre, may well produce around 15.000 jobs.
To collect all the services and connect the loose ends of the grid and the main axis we plan a ring road. As a scenic drive, the ring road leads past the hospital, the university, and residential areas, and delivers a magnificent view of the coast, and enables good access to Öskjuhlíd Hill. Recreational bicycle lanes go along the road.

Reykjavik Grid:
An underlying grid-structure appears at several places in the existing city. Inscribed as a lost language that knits together several periods of city extensions, it becomes the ideal grid for the Vatnsmýri development. It gives maximum clarity for organization and allows maximum flexibility in development. Every plot of the grid can be filled in independently. Our master plan proposes high density development at the intersection of the former runways, and lower density building at the fringes, to merge flawlessly with the surroundings. The sea and the Öskjuhlíð will determine the direction of the grid. The three main axes will appear as diagonals to this grid.

Reykjavik Central Park:
As Hringbraut will be led through a tunnel of 1km length under the park and the hospital, Hljómskálagardur Park will be connected to the Nordic house and the two combined will form the new large Central Park.

Airport:
Although relocating the Reykjavik Airport brings enormous opportunities we are also aware of the advantages that a central airport can bring. We propose to locate it on another site on a new island very near to Löngusker. To finance this relocation, industry located at the northwestern corner of the city-center could be moved to the new island which will become a prime location harbor area that could be developed jointly to contribute to the strengthening of Reykjavik as a capital city. 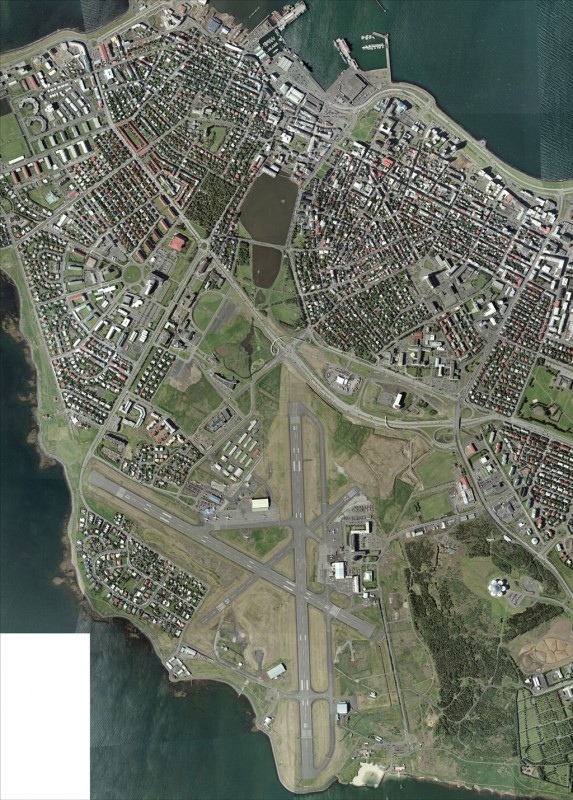 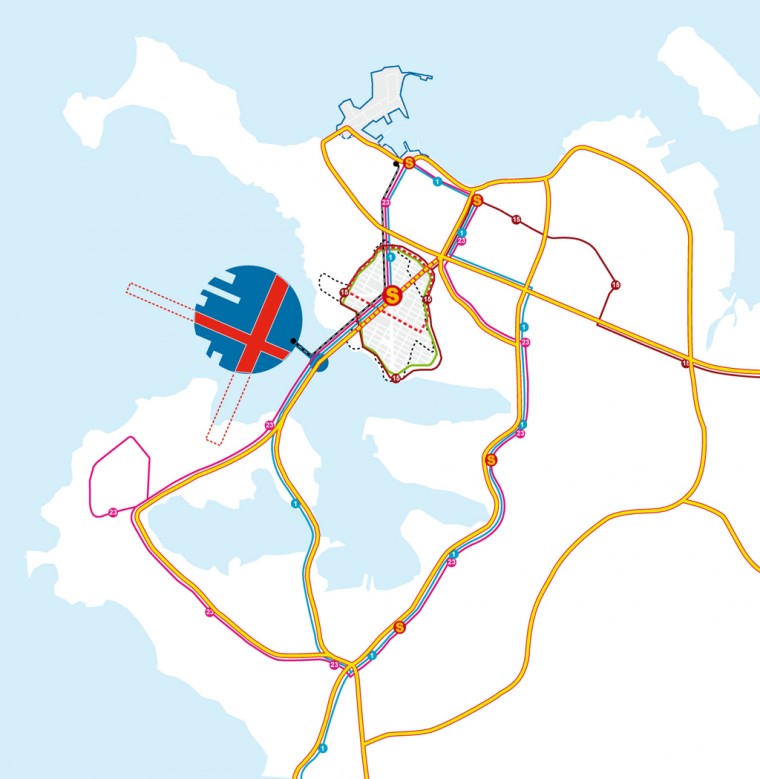 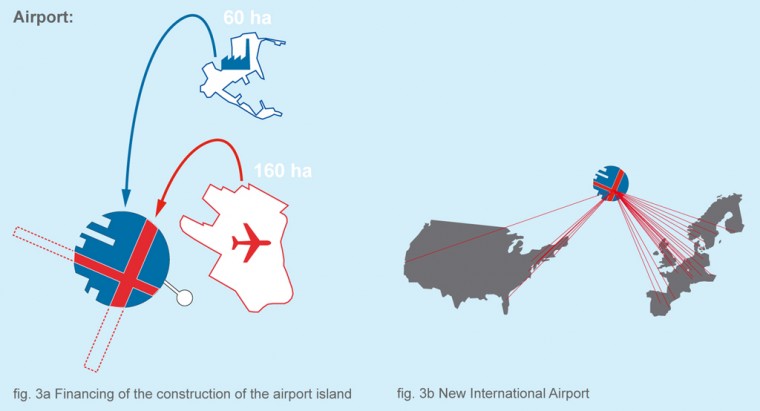 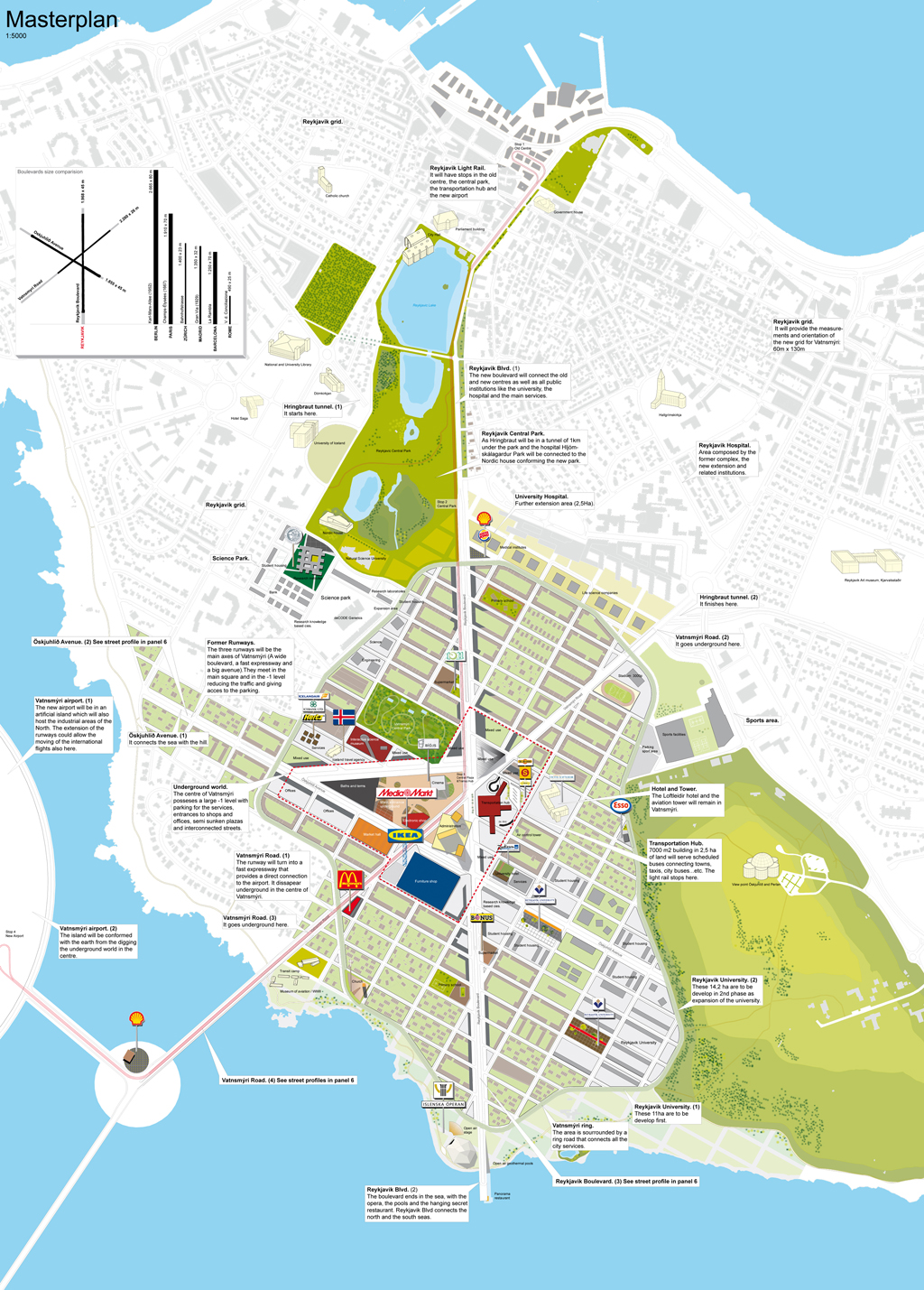 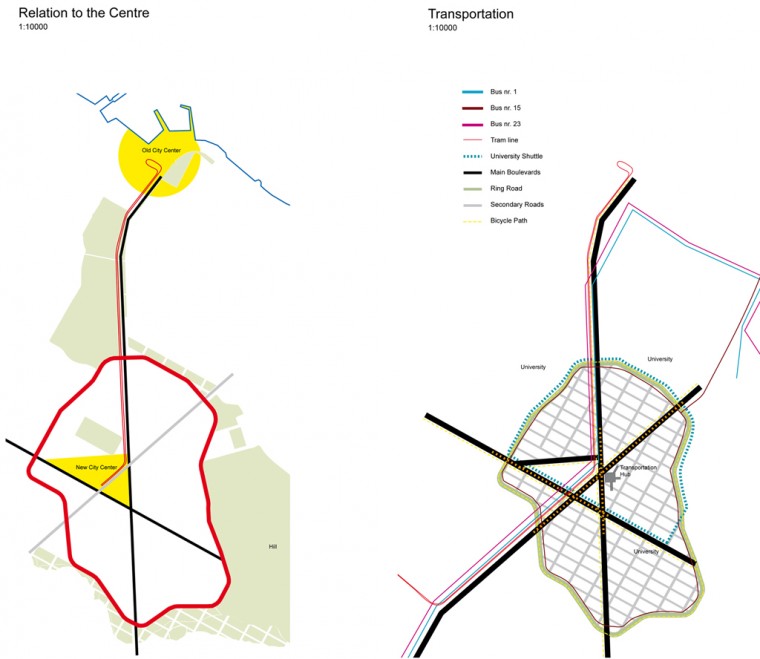 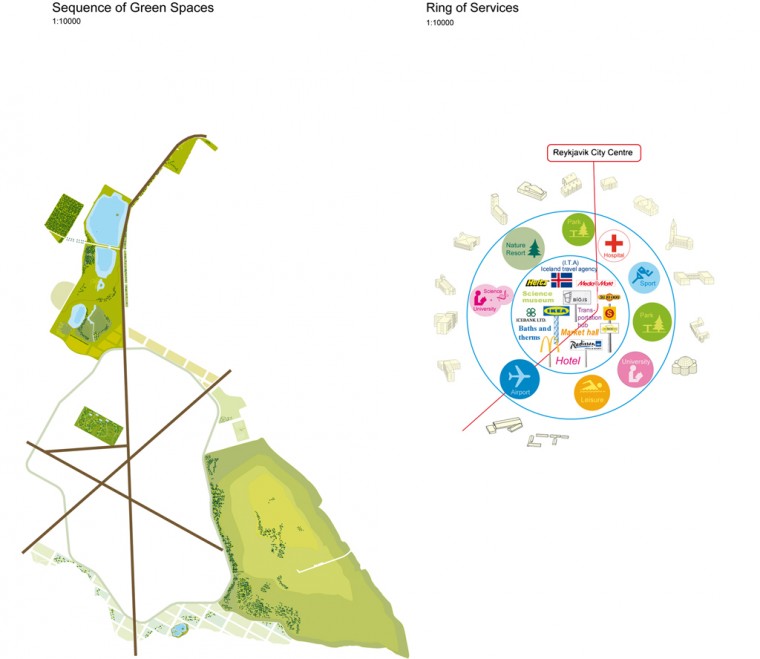 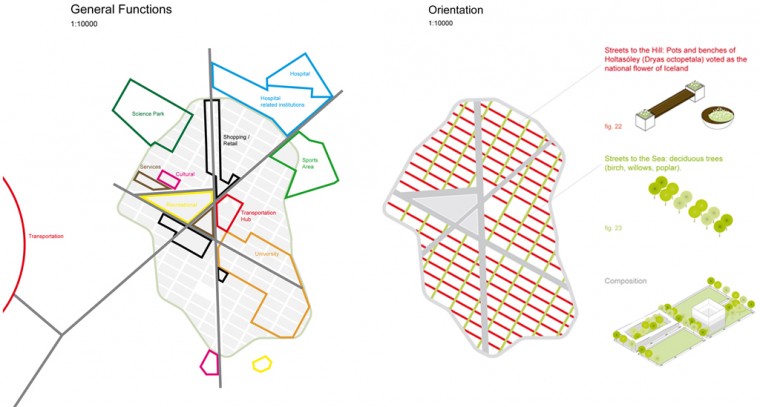 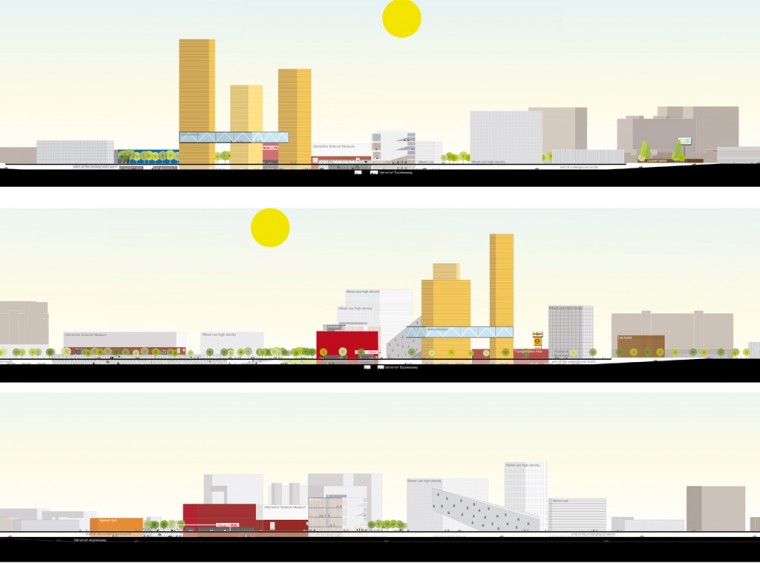 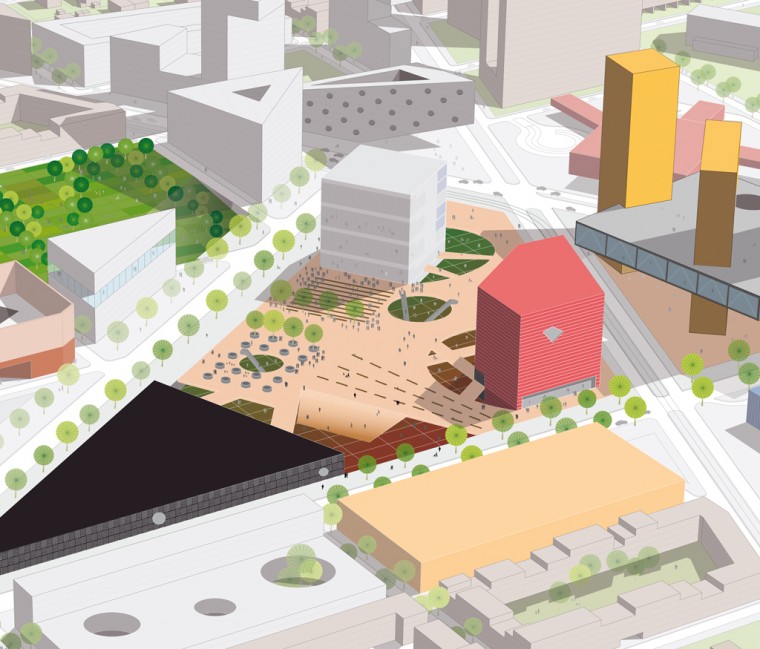 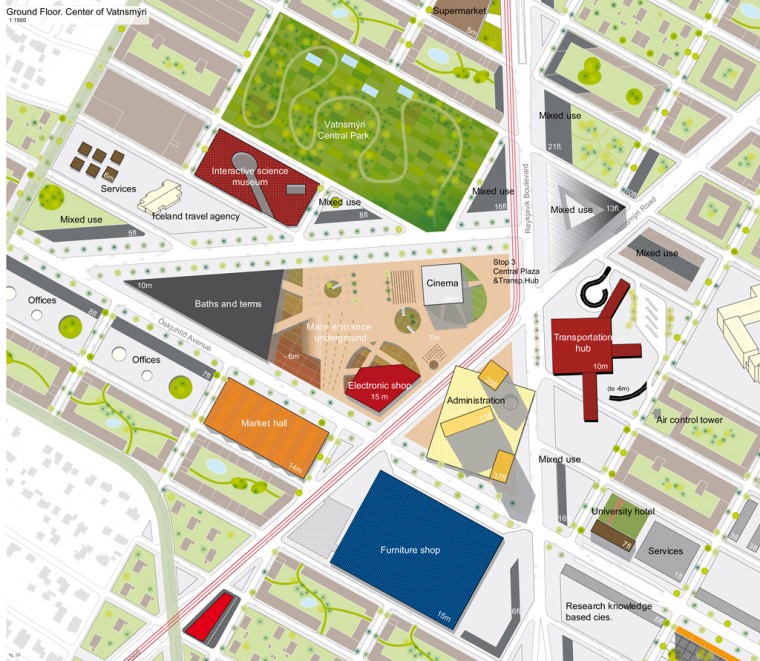 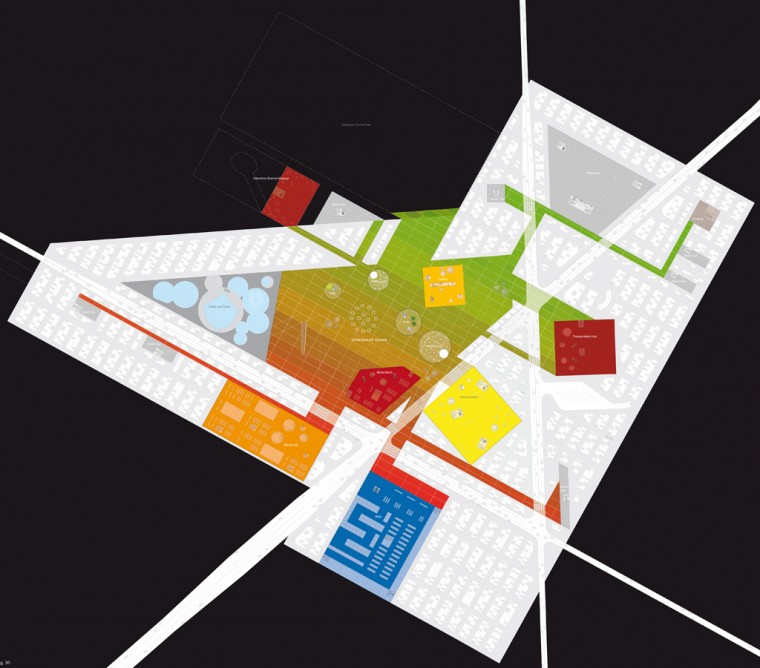 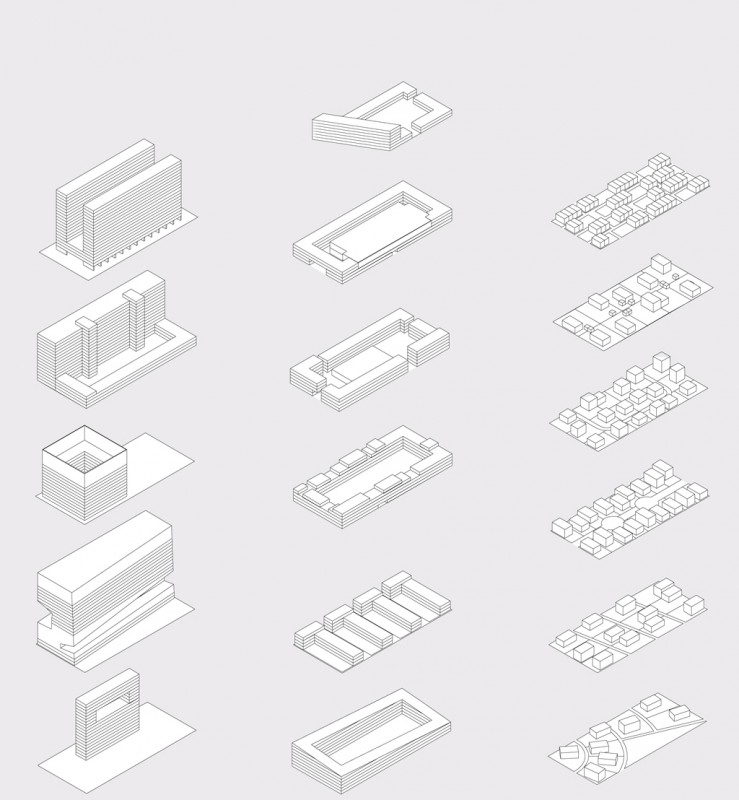 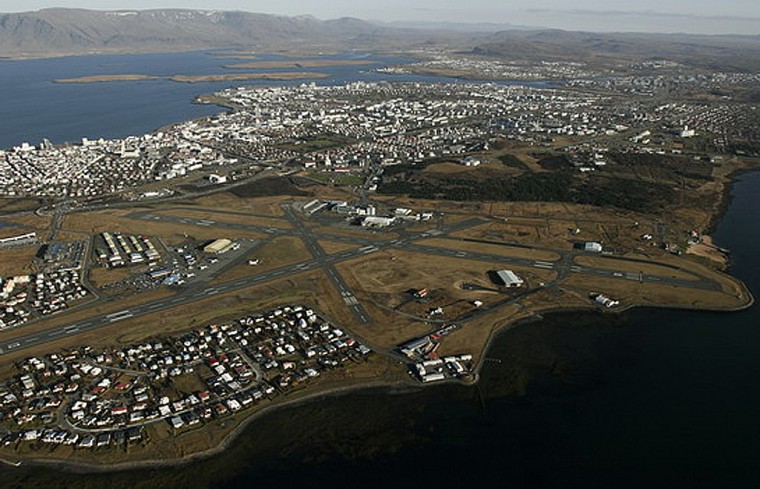