Rotterdam is a Whore – Interview with Andre Kempe 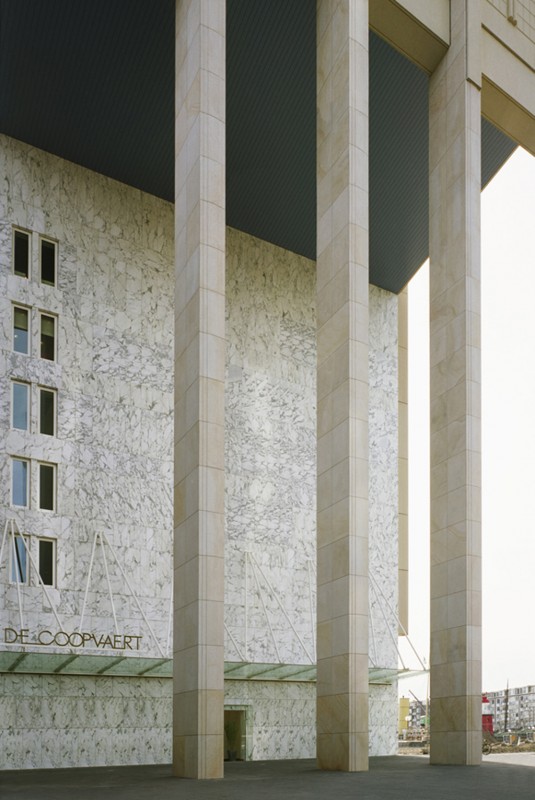 Beatriz Ramo and Bernd Upmeyer spoke on behalf of MONU with Andre Kempe. Andre is one of the principals of the Rotterdam based architecture office Atelier Kempe Thill.
This interview took part on Friday, January 15, 2010 in his office in Rotterdam.

Andre Kempe is an architect, who studied architecture and urban design in Dresden, Paris and Tokyo. He is one of the principals of the Rotterdam based Atelier Kempe Thill. Before opening his own practice in 2000, he worked in several Dutch architecture offices among others: Frits van Dongen, de Architecten Cie and Karelise van der Meer architecten. Since 1999 he is teaching and lecturing at several institutes  such as the Delft University of Technology, the Academie van Bouwkunst Arhnem and the Academie van Bouwkunst Rotterdam.

↑image above: ©Bas Prince: De Coopvaert, a residential/office tower in the centre of Rotterdam

BR: What do you think is the biggest impact of Rotterdam’s real estate business on the city of Rotterdam? To what extend do the developers shape the city?

AK: Rotterdam, like many other Dutch cities, started in the beginning of the 1990s to seriously sell off city land to private parties. Before that, the Netherlands wasere in a quasi-socialistic, quasi-communistic situation concerning land policy and the way real estate was developed. At that moment, the city of Rotterdam too owned the land and was in charge of all the developments. Since the land started to be given away, the city lost a lot of its power and influence. This has happened in several Dutch cities, but in Rotterdam, it has happened in an extreme way. Especially after 2002, when the populist right wing party Leefbaar Rotterdam gained power, this selling off policy has been pushed even more. (…)

BR: Once you mentioned to us that Rotterdam was a kind of whore that is used by everybody for their own interest as nobody really seems to care for the city or love the city. That obviously stands in contrast to the situation in Amsterdam.

AK: There is a series of successful projects in Rotterdam that were developed over the past 20 years. One of these projects is the Kop van Zuid4, where urban planner Riek Bakker5 was in charge and hired the right architects and pushed the developments in the right direction. Another comparable example is Mullerpier from KCAP. The interesting thing is that these projects were clear cases of top – down urban planning on a bigger scale.
For a large part of the city the municipality unfortunately does not have such a clear and proactive master plan. Often they can only react to sometimes very aggressive demands by developers. In that sense Rotterdam sometimes appears to be a whore – yes. In that sense Rotterdam is a neoliberal city by definition, where the municipality seems nearly powerless, an urban test case that showcases an extreme example not only in the Netherlands, but also in the whole of Europe. But the future will show whether if the results are good or not. I am critical about the outcomes, as quality seems to appear mostly accidental.

BU: When did the originally fertile relation between politics, investors and city planning in Rotterdam break down? Did this happen after WWII?

AK: After having been destroyed in WWII, Rotterdam was reconstructed and became a progressive and hip modern city in the fifties and sixties. The city was very up to date at that time. As far as I know the coherence started to break down in the eighties when the leading role of the proletariat as “motor” of urban development lost strength and the demands of the middle classes became more important. But I don’t really know the details.

BR: At that time, they seemed to have put a lot of hope in architecture and planning to create a modern city.

AK: Yes, Rotterdam was European avant-garde after the war. (…)

BU: Does the lack of interest of the politicians or the municipality in fact transform the city of Rotterdam into a perfect territory for investors?

AK: It sometimes appears as a wild and crazy hunting ground for making money, but this is my perception. Actually, I think that the lack of structure is somehow also a problem for the developers, in the end the market too asks for clearer rules. (…)

AK: I don’t see any sign that this will change. I once talked to an owner of a big oil factory in the harbour area. He said that Rotterdam is a just a spot where you can enter easily and leave easily, but it is not a place to be. That seems to be symptomatic.

BR: The benefits from the harbour don’t reach the city?

AK: Not that much, as far as I know, but it seems to have been different in the past.

BR: Is this the case because the people that earn the money in the harbour don’t live in the city?

AK: I believe that this is part of the reason. Most of them don’t live in Rotterdam, they don’t even go into the city. They come by car to their firms and maybe live in Brabant 8 or Utrecht or somewhere else. Most of the University Professors don’t even live in Rotterdam. That’s why the city needs to invest in housing and related qualities for the middle class.

BU: Could you actually imagine becoming a developer yourself? Would that be interesting?

AK: Well, when I start thinking about opening a development department, the first question for me would be: how do I get plots to develop? How do I get areas where I can invest? It is very difficult in Rotterdam and also in other Dutch cities to acquire plots as a small developer. Those small companies have a lot of difficulties to run their firms in general, because in Dutch cities and particular in Rotterdam, the city works with big firms. The city is big, so the city works with big companies. So there is almost no chance to buy something and develop it by yourself. Friends of us did that and tried to buy a piece of land together with eight or nine other people in the north of Rotterdam, but although they had a good plan and good connections to the city, they still did not manage. (…)

BR: But anyhow, do you see Rotterdam still as an attractive place to base your office?

AK: One reason to be in Rotterdam is that it is an open city. I absolutely share the sympathy for this visual openness. If you are in Amsterdam, everything is designed and everything is done somehow. You also get entertained at every corner, which is always a reason not to work. In Rotterdam you are in a way forced to concentrate, which is a good thing. The openness here also stimulates our imagination, which we like a lot. In Rotterdam there are also a lot of interesting people in the architecture and art scene. The Nai and the Architecture Institute of Rotterdam create an interesting intellectual platform. There are a lot of good architects, which makes it possible to run an architecture office and always find good staff. And not to forget: to live here is relatively cheap for a big city. You can have cheap office space and a very affordable life. Buying or renting a house costs half of what you would pay in Amsterdam. (…)

BR: I like the dynamic and experimental character that we can still see in some areas of the city….so lets keep Rotterdam as a whore…but as a higher-standard one…
The city just needs a more intelligent pimp that chooses her clients better…