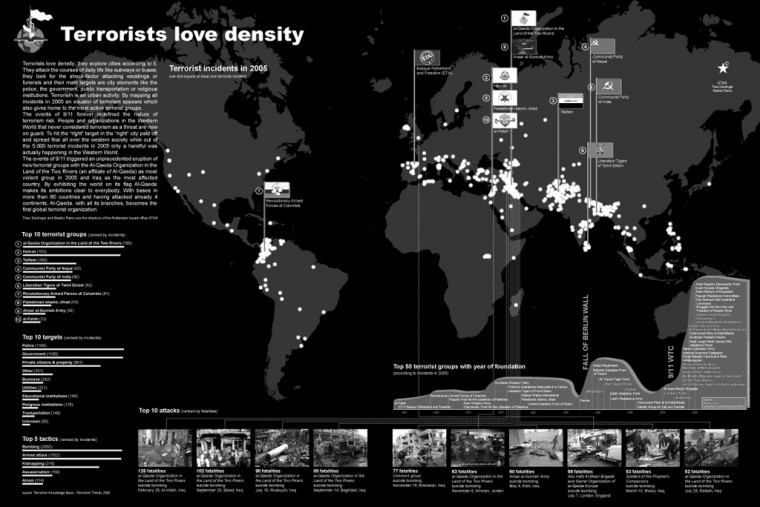 Terrorists love density; they evaluate cities on that basis. They attack the bloodstream of daily life such as subways or buses; they look for the shock-factor attacking weddings or funerals and their main targets are city elements such as the police, the government, public transportation, or religious institutions.
Terrorism is an urban activity. By mapping all incidents of 2005 a longitudinal pattern of terrorism appears which shelters the most active terrorist groups.

The events of 9/11 forever redefined the nature of terrorism risk. People and organizations in the Western world that never considered terrorism to be a threat are now on guard. To hit the “right” target in the “right” city paid off and spread fear all over Western society while out of the 5.000 terrorist incidents in 2005 only a handful actually happened in the Western World.
The events of 9/11 triggered an unprecedented eruption of new terrorist groups with the Al-Qaeda Organization in the Land of the Two Rivers (an affiliate of Al-Qaeda) as the most violent group in 2005 and Iraq as the most affected country. By exhibiting the world on its flag Al-Qaeda makes its ambitions clear to everybody. With bases in more than 60 countries and having attacked already 4 continents, Al-Qaeda, with all its branches, has become the first global terrorist organization.