This study is meant to give a general idea of the elements that are shaping cities today. Cities of today have the same needs as those of hundreds of years ago: communication and representation. They need to be connected and they need to be attractive.
The elements that provide these necessities change and evolve through time. I see the European City as an evolving system of re-invention of the res publica. However, today the shape of the city is not designed solely by architects, but also by developers and multinational companies. What once the Roman roads meant for communication is represented by Ryanair today. The cult and veneration that temples received centuries ago, is these days being given to Superstar Architecture. Could Ikea be the latest step in two thousand years of evolution of the Agora?
↑ image above: Matrix of necessities throughout history

The Current Situation
Strong competition among cities in Europe has started. The battlefield for these cities has widened from the national to the international stage. This process of global integration is reorienting the political, social and economical urbanism.  It generates the need in these cities for incorporating certain elements that directly define the European City of today. They seek for identity. The aim is to establish relations between the cities, based on communication and representation, to belong to the spatial structure of corporations, and to create public initiatives to attract foreign investment and tourism. A beautiful square or an impressive cathedral are not enough for the city today. To be recognized as ¨A European 21st century City¨ a big portfolio of projects needs to be assembled. This portfolio will address strategies of city developers and multinational companies rather than the rules of architects. We witness how at one and the same time similar elements appear in very distant European cities, transforming them enormously, positioning them on the European map, or giving them a new identity.

Secondary Cities: The Rising Urban Stars*
Yet the most radical changes are not taking place in capitals like Paris or Madrid, but in smaller and less important secondary cities that need to compete for their position in Europe. The last decades were the era of the megacity. Nevertheless, in the coming years we are going to talk much more about the smaller ones, as most of the urban populations live in these secondary cities. They have the possibility and opportunity to change. Paris will always be Paris. Today it is easier for Secondary Cities to build self-sustaining economies, independent of the big cities, as firms and workers look to avoid the problems of these major centres. Regional hubs, resort towns, provincial capitals… are booming! **

Zaragoza, the Urban Star
Zaragoza (Spain) is one of these “Urban Stars”. Situated between Madrid and Barcelona, it is the fifth biggest city in Spain, with 650.000 inhabitants. Until now, Zaragoza was no more than a regional centre but it is currently developing an unprecedented number of ambitious projects. The position of Zaragoza both in the national and international context – specifically in the European – will totally change. In a couple of years, Zaragoza will have taken one of its biggest steps in its history.
In 2008, Zaragoza will host the next International EXPO. It has just completed Plaza, the biggest logistics platform in Europe. Ryanair has been operating services to the city since 2004, adding a new destination every year. Ikea just opened a store last May. Since 2003, the high-speed train connects the city with Madrid in less than an hour and a half and it will connect with Barcelona in 2008. Zaha Hadid and Herzog & de Meuron are building in the city. The football stadium will be completely renovated. Global brands like H&M have shops in the city since the year 2001. It is a candidate for the European Capital of Culture in 2016. It works on its rebirth as a “City of Knowledge’’ and it has created a committee of experts, including Manuel Castells and Saskia Sassen, to implement their theories in the city.
These elements are significantly changing Zaragoza; from its position in Europe to the way the population will furnish their living rooms.

All cities, consciously or unconsciously, try to collect them all. The more they obtain, the closer they get to being ideal cities. With the help of these urban elements, secondary cities can be successfully promoted and can become attractive locations for business and living. Such effect would never take place in A-list cities, where one element would never mean so much, as they already have strong and fixed identities.
In the history of European Cities, we have always found some common urban elements that establish coherence among the different cities in every epoch: the agora, the market square, the gothic cathedrals, etc. It would also be possible to draw up an “urban shopping list” for each historical period.
Zaragoza is the only city in Europe that is developing the entire “urban shopping list” at the same time, understanding it as a sum of elements. This has allowed Zaragoza to re-create itself from a provincial capital into the new “European City” in a record time of just 8 years.

Ten elements, ONE operation: The Re-Creation
Zaragoza has created Plaza, its logistics centre, connected it to the high-speed train and located it right next to the future new airport terminal, injected with activity by Ryanair, which tries to link the city with various additional destinations before the International Expo in 2008. The Expo is pushing this and other infrastructure developments like the closing of the main ring where Ikea just opened. Based on the Expo theme of “Water” a complete regeneration of the riverfront is being carried out, where the new football stadium may be built. The Expo site will be connected to the high-speed train station by a bridge by Zaha Hadid, at the end of the “Digital Mile”, a project in collaboration with MIT as a “Zaragoza City of Knowledge” initiative guiding the city into the Information Society. This, and the Herzog &de Meuron project for the new Goya museum, will support Zaragoza’s candidature for the European Capital of Culture in 2016. The partnership with MIT started a logistics masters program set up in Plaza, where Zara, one of the biggest retail brands, took the biggest lot to built one of its Spanish logistics centers.

Hardware and software
To talk about a contemporary “European City” is to talk about these elements. Today the main differences between, and the similarities among, European cities are measured by the non-existence or the presence of these elements. Sofia in Bulgaria feels very “European”, very familiar to many places such as Barcelona or Vienna.  Bucharest reminds tone of Madrid or Paris, but there is a huge difference between Sofia and Bucharest and Barcelona, Madrid o Vienna. The “hardware” may look the same, recognizable…but the “software” – the urban shopping list – accounts for the differences. The collection of these elements determinates the European City of today. The hardware is static. The software activates the hardware and the construction of it. (On the other hand, cities in the Middle East, with very different hardware, like Dubai and Kuwait are getting the same software as our cities do. The Superstar architecture phenomenon is even getting more intense there. Ikea has opened stores in both Dubai and Kuwait, as have H&M and Zara, etc…)
Within the rich diversity in the history of Europe, we were always able to find similar elements in these cities, within the limits of the territory, in each historical epoch. Each polis in the Greek Empire had an agora; the inhabitants of the cities in the Roman Empire entertained themselves in similarly designed theatres. We recognize a Roman theatre in Algeria or Italy, and a Gothic cathedral in Spain, France or Poland.  This coherence remained throughout history and extended to the creation of city networks through roman roads, medieval sea routes, etc.
Ikea has created a new activity centre in Zaragoza. Ryanair does not make the city more beautiful, but it is raising the number of visitors. Zaragoza is 2000 years old, but the Expo 2008 or the Superstar Architecture of today will present it to Europe for as if “the first time”.

The “Urban Shopping List” is a tool to approach the city. It reveals how close the city is to its ideal condition. 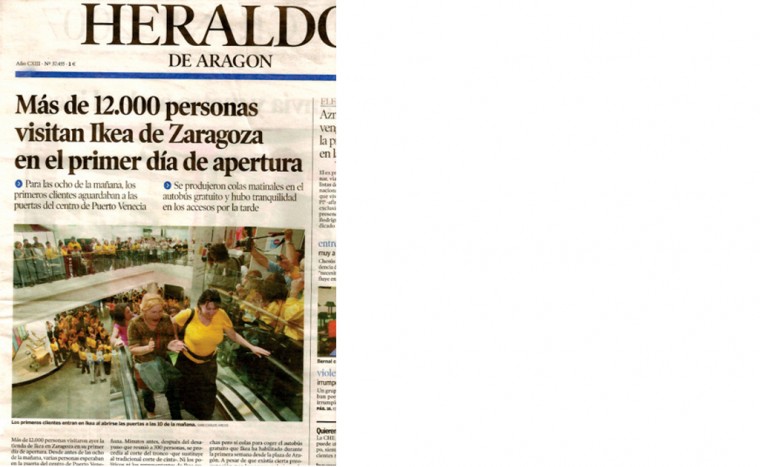 Ikea in the area of Spijkenisse (The Netherlands)

3-Low-Cost Airline
Brussels is full of monuments to the `builders of Europe´. It may now be time for a Stelios square or a Boulevard O’Leary, the two pioneers of Europe low-cost airlines (EasyJet and Ryanair), who have done more to integrate Europe than any numbers of diplomats and ministers
From: The Economist January 29th 2005 Low-cost founding fathers. How cheap air flights are bringing Europeans together 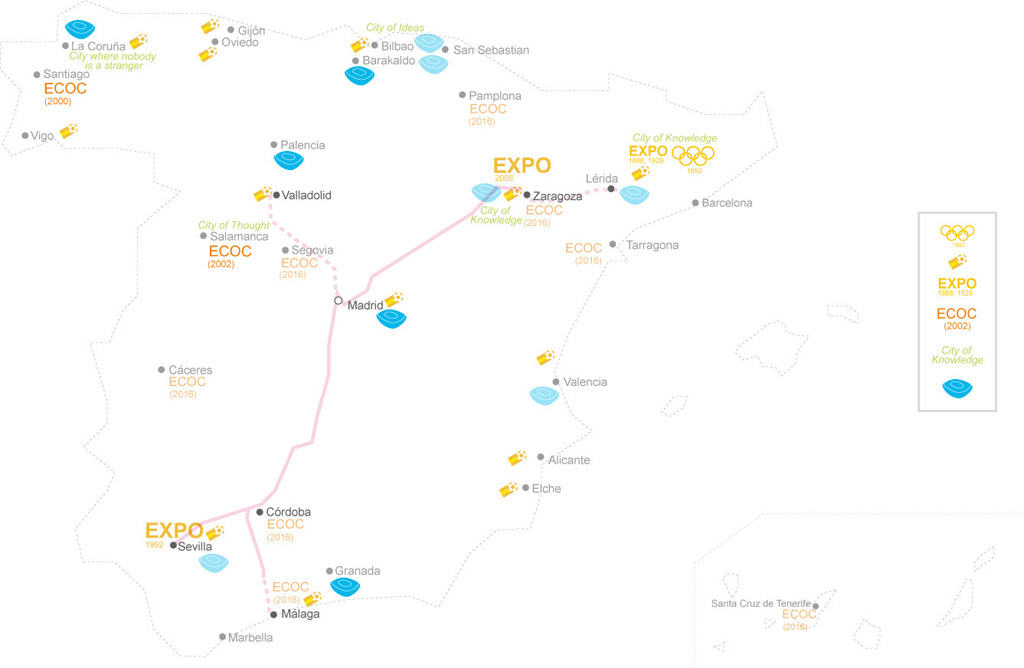