Flexible Housing in Liège – The Room That Was Always There Imagine what it would be like to find a new room in the house where you had been living your entire life… Imagine the possibilities.
Instead of enlarging the urban tissue, the project is placed in an existing “hidden” urban area, activating a room that has always been there. With this gesture, not only do we increase the density of the Balteau area that will profit from the existing infrastructure, but we help the regeneration of this degraded neighbourhood of Liège as well. The proximity to the new Calatrava station and the river, as well as the works in the esplanade, make the situation of our project of great interest.
Former industrial urban blocks such as the Balteau site were too large to be friendly to pedestrians. We divide up the block into six smaller ones, bringing public space to the inside, and producing a tighter network of mainly pedestrian and bicycle paths in the area. Each of the six resulting blocks of the Balteau site will be a mix of existing and new houses.
The resultant smaller scale reminds us of Liège city centre, a tight urban fabric composed of houses of almost identical proportions and façade composition. Also, we will use one single module for the development of the entire block. This will allow for flexibility in use and construction.
The new houses will shape the inner streets of the Balteau, whose atmosphere will be serene and tranquil. Balteau will be a secret village right in the centre of the city.
Originally, the Balteau site was generated from its core where the factories used to be. We create a square in this area. It will be the meeting point of the Balteu. Just as Piazza San Marco in Venice has its campanile, or Liège its Perron in Place du Marché, we maintain the tall chimney of the Balteau site as its reference point on the square
Housing:
The module that will accommodate all the situations inside Balteau is 4,5 m x 13,5 m in plan by 10,5 m in height. An oversized free room height of 3,2 m will increase the spatial quality and its future adaptations. We listed four different situations with regard to the orientation of the modules and the open and closed surrounding walls.
Due to these different conditions, we arrive at 10 different housing types ranging from 45 m2 to 150 m2. 132 modules will be built, and depending on the type used, 500 to 800 new residents will move to the Balteu. Each module is accessible from the street, and has a private roof garden, and some offer the possibility of an independent office space inside the house. A large underground parking will cover the needs of the Balteau site and the design centre. The remaining parking lots may be rented out to third parties to help financing the operation.
Design Centre:
The main access to the Balteau is at the Rue Paradis. We place the required Design Centre as a gateway to the room that has always been there, reinforcing the axis between the new station and the river. It is split in two volumes. The bottom volume will help to frame the door, while the top one, cantilevering over the Rue Paradis will catch the attention of the pedestrian visitors arriving from the station. 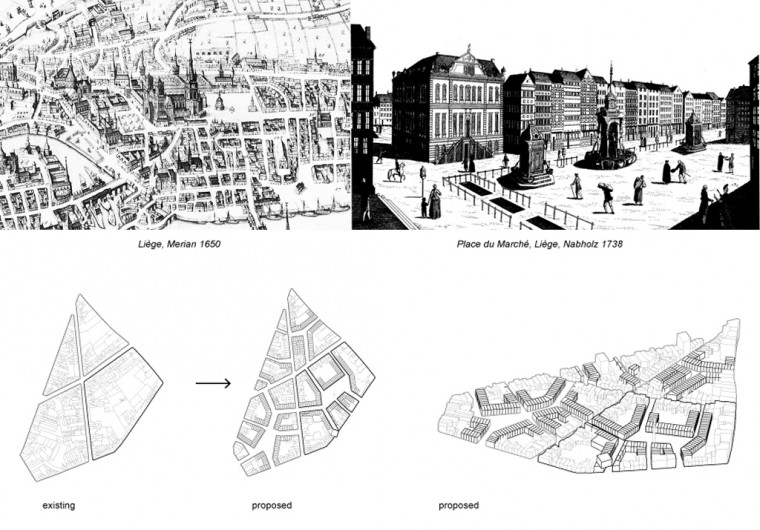 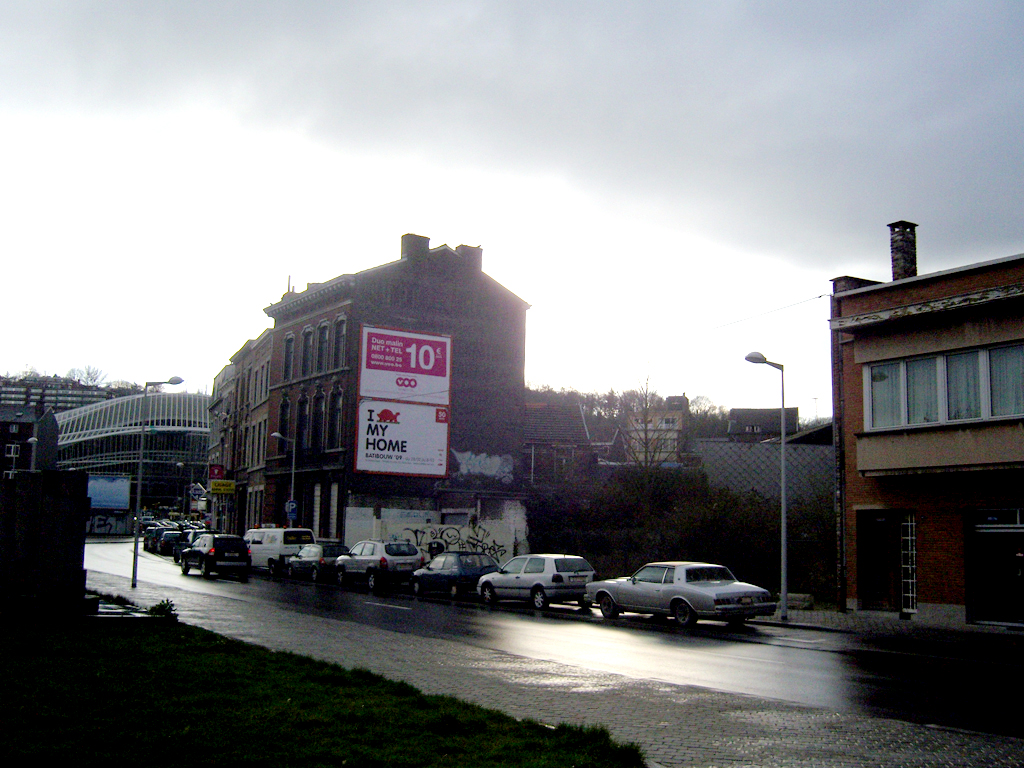 Balteau entrance – Calatrava Station at the back 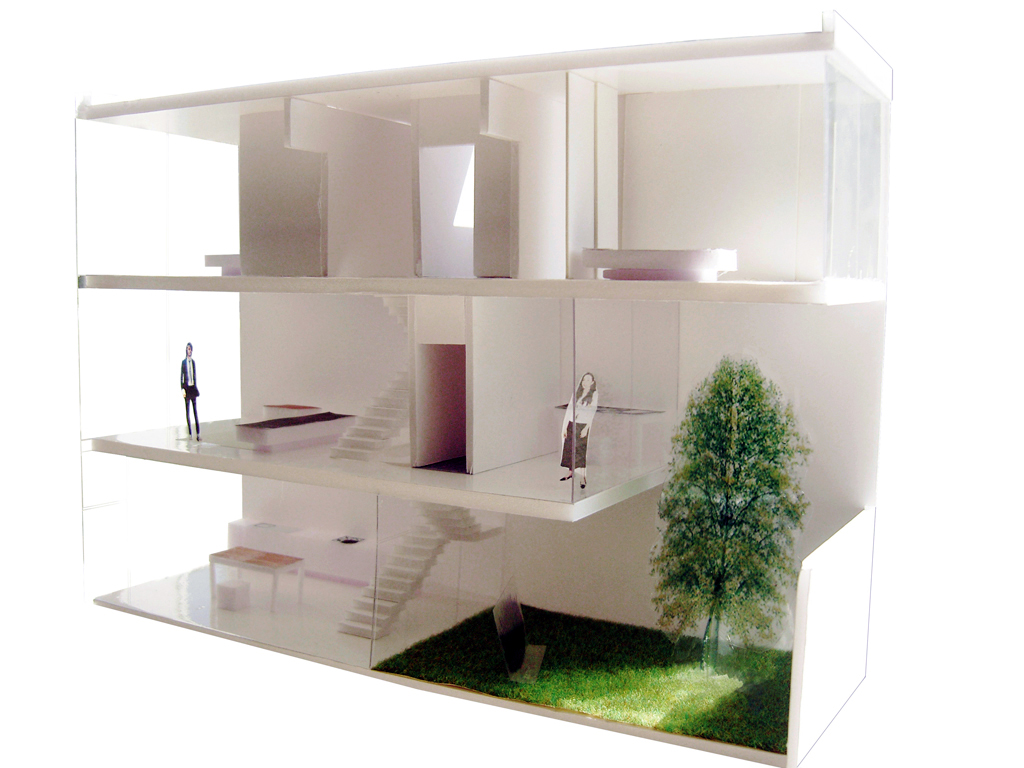 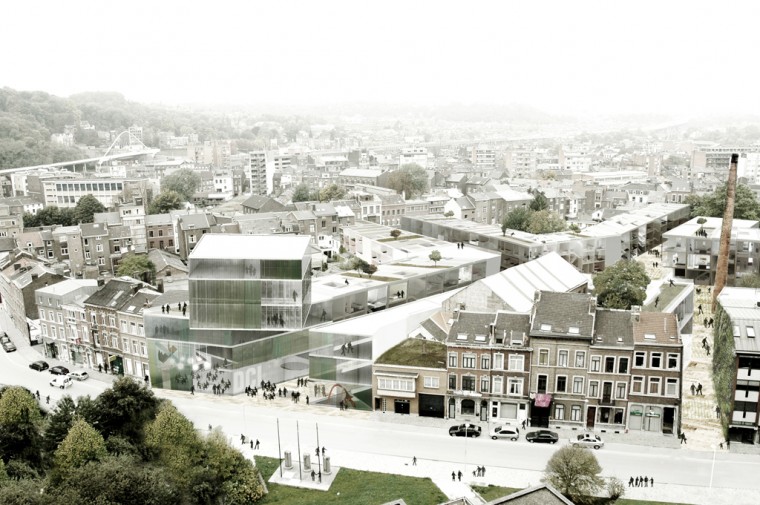 The Design Centre appears in the foreground on the esplanade 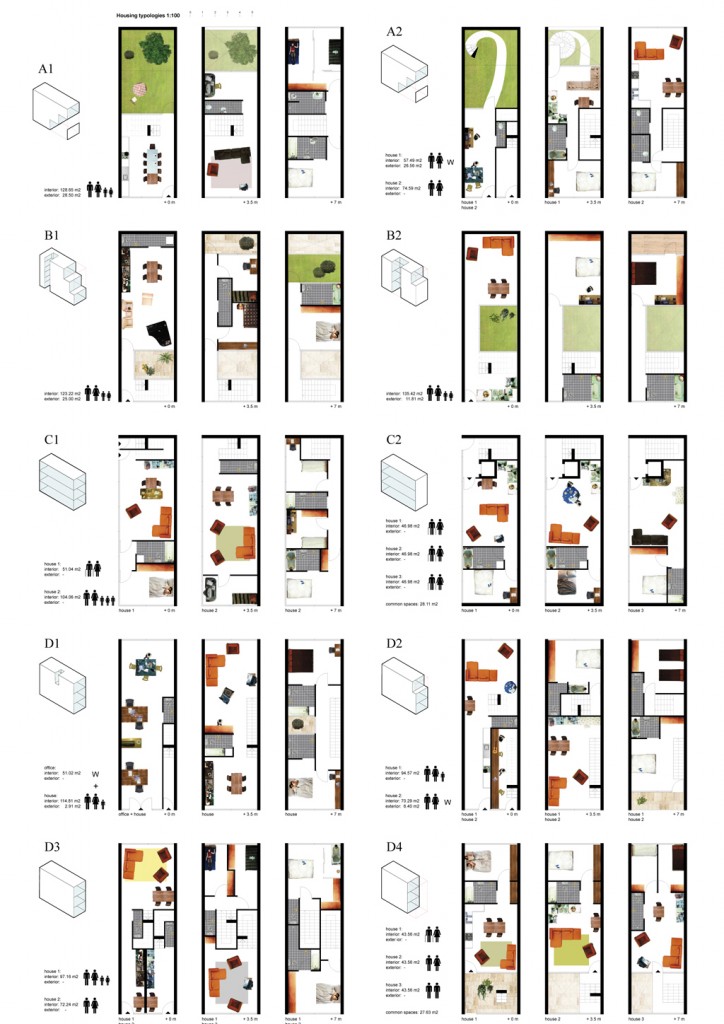 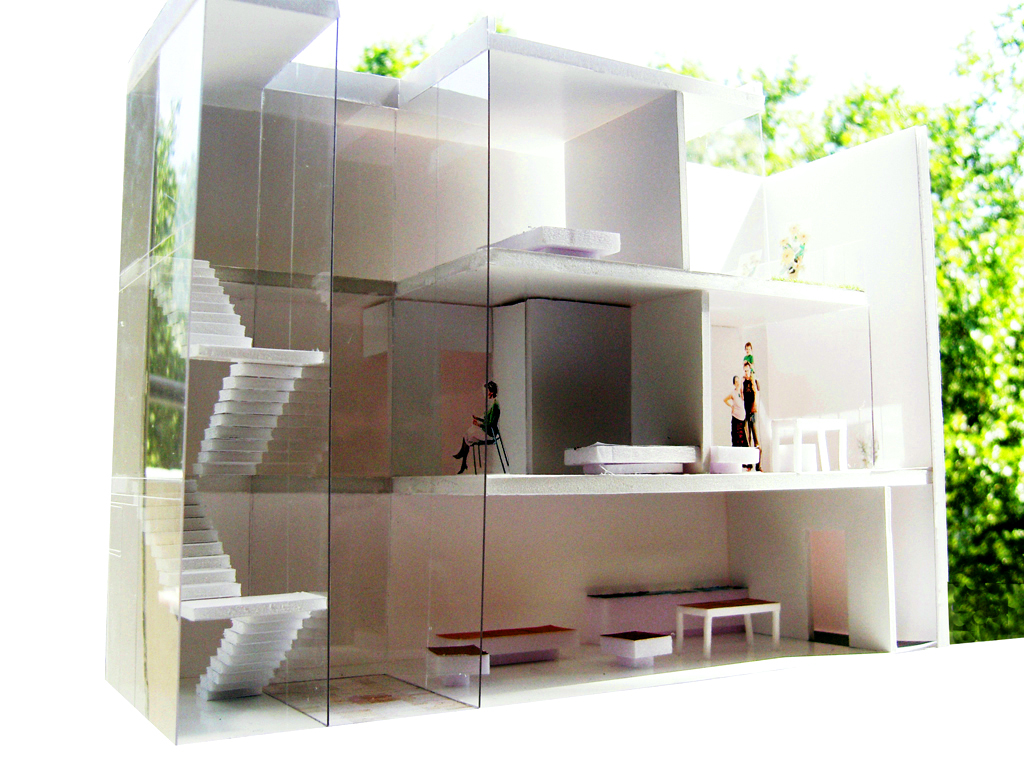 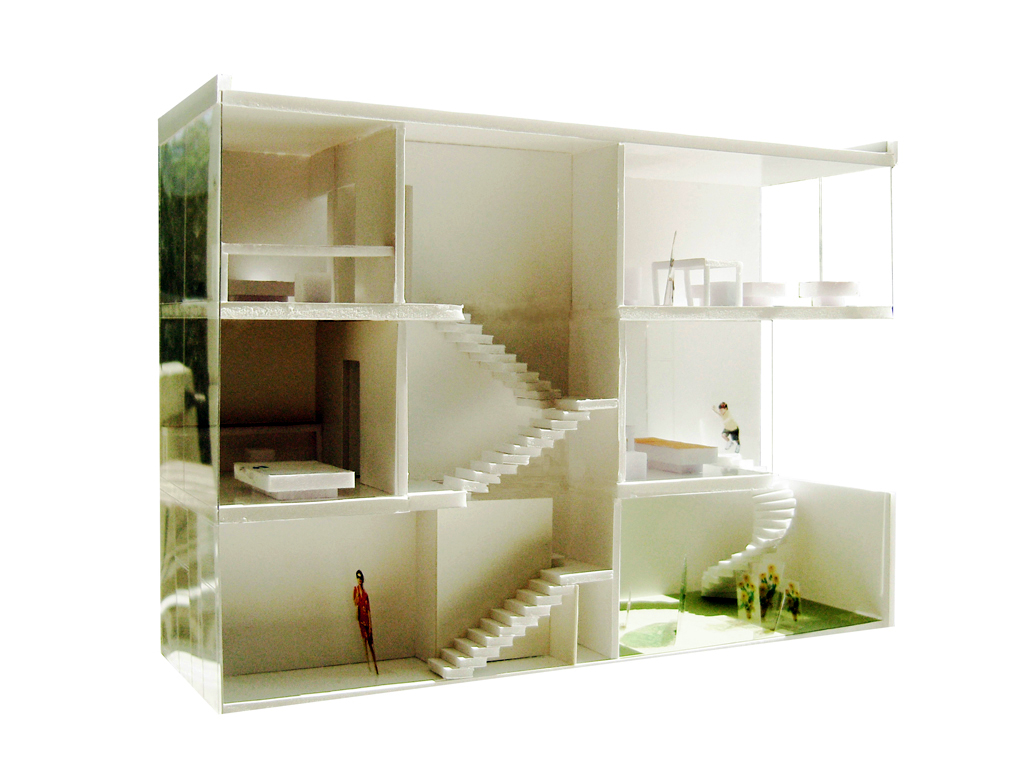 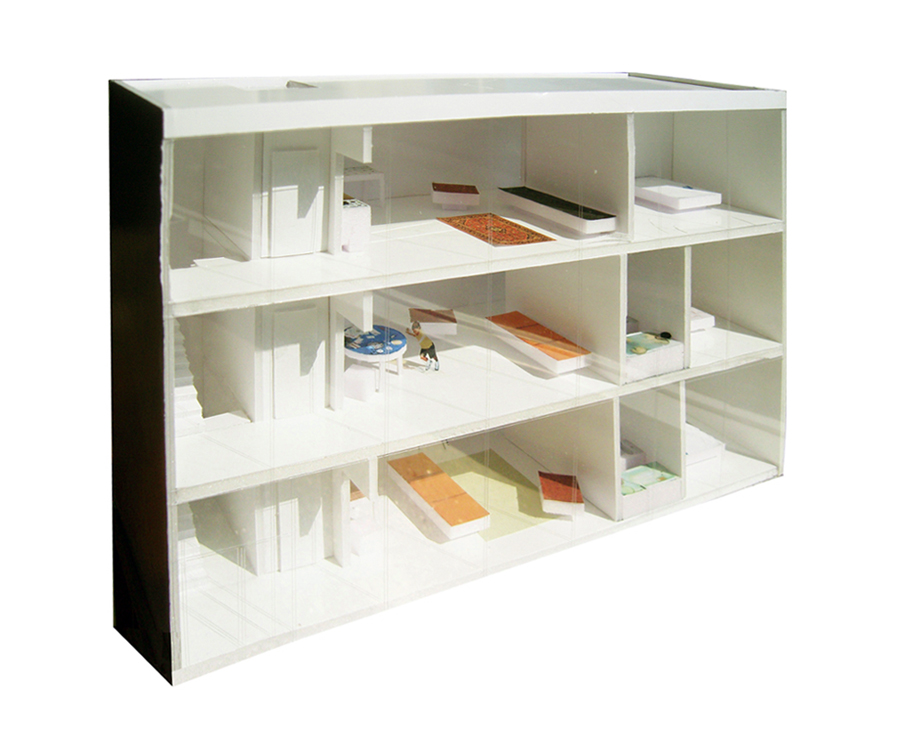 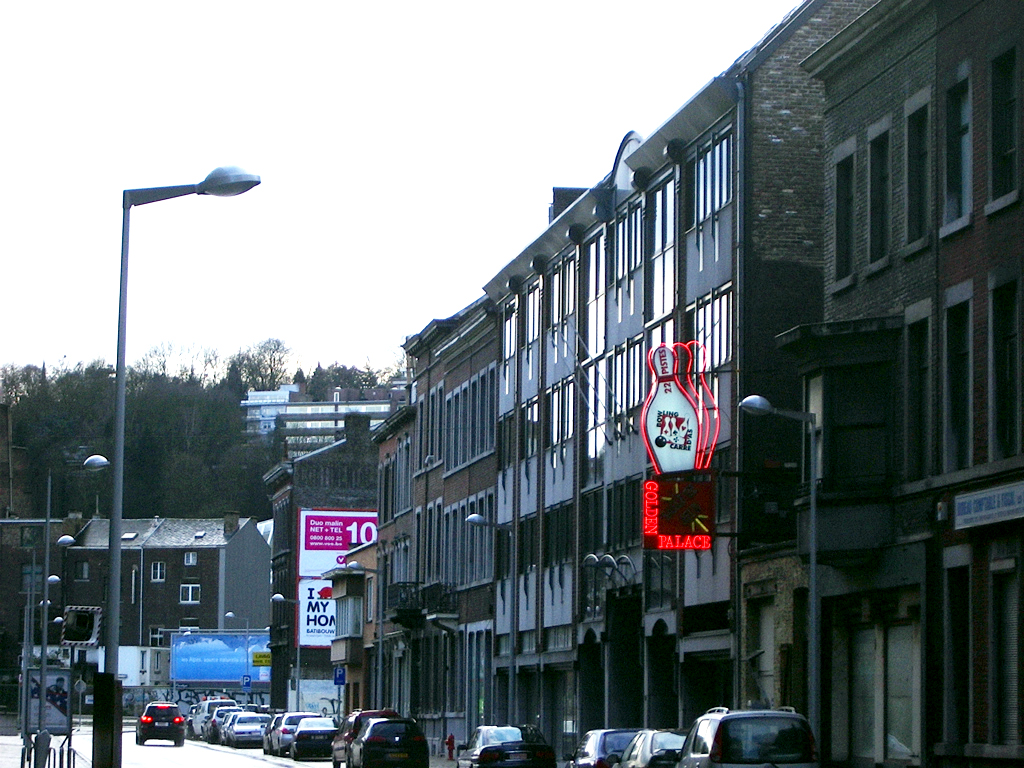