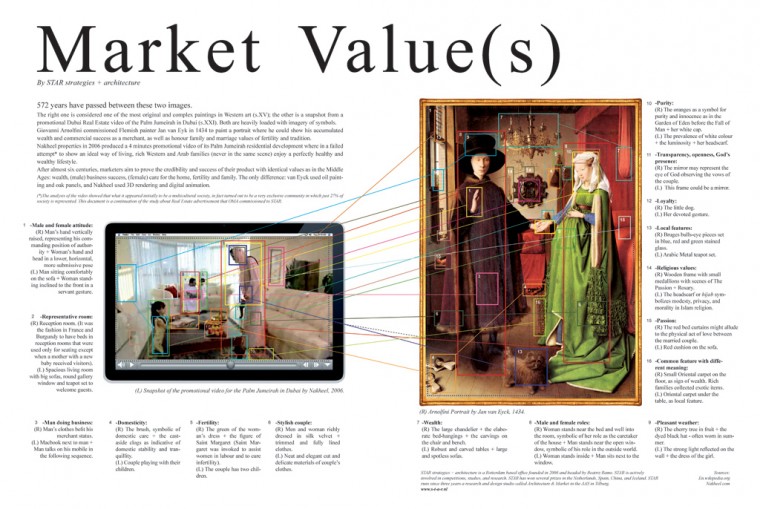 572 years have passed between these images.
The image to the right is of one of the most original and complex paintings in the Western history of art (C. XV) ; to the left is a snapshot from a promotional Dubai Real State video of the Palm Jumeirah in Dubai (C. XXI). Both are heavily loaded with the imagery of symbols.

Giovanni Arnolfini commissioned the Flemish painter Jan van Eyk in 1434 to paint a portrait that would show his accumulated wealth and commercial success as a merchant, as well as his family honour and the values of marriage – fertility and tradition.
Nakheel properties in 2006 produced a 4 minute long promotional video of its Palm Jumeirah residential development project which – in a failed attempt* – tried to show an ideal way of living for rich Western and Arab families (never in the same scene) who enjoy a perfectly healthy and wealthy lifestyle.

After almost six centuries, marketers aim to prove the credibility and success of their product using identical values to those of the Middle Ages: wealth, (male) business success, (female) care for the home, fertility and family. The only difference: van Eyck used oil painting and oak panels, and Nakheel used 3D rendering and digital animation.
This document is a continuation of the study on Real State advertisement that OMA commissioned STAR to produce in 2006.
See Dubai Business Bay.

*an analysis of the video showed that what initially appeared to be a multicultural society, turned out to be a very exclusive community in which only 27% of the society is represented. (L) Snapshot of the promotional video for the Palm Jumeirah in Dubai by Nakheel, 2006. 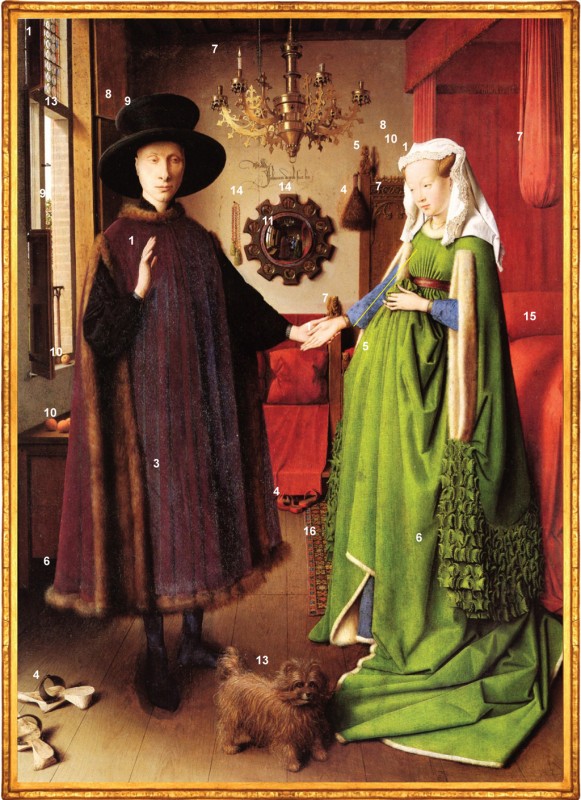 2-Representative room:
(R) Reception room. (It was the fashion in France and Burgundy to have beds in reception rooms that were used only for seating except when a mother with a new baby received visitors).
(L) Spacious living room with big sofas, round gallery window and teapot set to welcome guests.

4-Domesticity:
(R) The brush, symbolic of domestic care + the cast-aside clogs as indicative of domestic stability and tranquillity.
(L) Couple playing with their children.

5-Fertility:
(R) The green of the woman’s dress + the figure of Saint Margaret (Saint Margaret was invoked to assist women in labour and to cure infertility).(L) The couple has two children.

7-Wealth:
(R) The large chandelier + the elaborate bed-hangings + the carvings on the chair and bench.
(L) Robust and carved tables + large and spotless sofas.

9-Pleasant weather:
(R) The cherry tree in fruit + the dyed black hat – often worn in summer
(L) The strong light reflected on the wall + the dress of the girl

10-Purity:
(R) The oranges as a symbol for purity and innocence as in the Garden of Eden before the Fall of Man + her white cap.
(L) The prevalence of white colour + the luminosity + her headscarf

11-Transparency, openness, God’s presence:
(R) The mirror may represent the eye of God observing the vows of the couple.
(L)  This frame could be a mirror

15-Passion:
(R) The red bed curtains might allude to the physical act of love between the married couple.
(L) Red cushion on the sofa.